When the UK fully emerges from the coronavirus lockdown and shoppers are allowed out again for non-essential purchases, their local high street could be a very different place from the one they left in March. Since the pandemic gripped the nation, a string of big-name retailers have fallen into administration or announced store closures, and some of the shutters that were pulled down may not be lifted again.

The failures of Laura Ashley, Warehouse, Oasis and Cath Kidston did not go unnoticed, but the news stories were, of course, a footnote to other, more tragic, events. And, so far, to those who don’t work for them, their loss has been invisible. But the job cuts at those retailers and other struggling brands, such as Debenhams, will be felt by thousands of families. And in the short term many high streets will be even more scarred than they were before lockdown.

When I ask Mary Portas if it is the worst crisis ever to hit the high street, she points out that it goes far beyond that. She is on a video call from her home in Gloucestershire where, like many people, she is juggling work – for the consultancy that she founded – and home-schooling her young son. “It’s the worst crisis to hit anybody in any kind of industry that relies on people having disposable income and actually being outside their homes,” she says.

Portas is keen to talk about what she calls “the kindness economy”, a concept she has been considering for a while, but which she says is now going mainstream because of the coronavirus crisis. It’s the subject of a newsletter she has launched, called the Reset, where she describes “a new era of shopping and living”, and she speaks passionately about it. But as someone who spent a year at the start of the last decade looking at the problems of the high street, and how to address them, she must be thinking about the state it is in now. 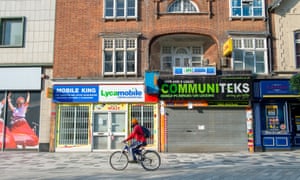 She says that what consumers are looking for has changed. “What we’ve gone through – certainly in the fashion industry – over the past 20 years is: ‘How fast and how cheaply can we get this into the market?’ And it was all about how quickly things were turned around. So you had businesses that were just fast fashion – it was about operations, it was about physics of the business,” she adds.

“Some of those are crumbling, and we will see those falling. The same with some of the stores that were about more stuff, just stuff, stuff, stuff – your House of Frasers, your Debenhams, your Macy’s in the US. It was just floor after floor of stuff, and that game is over.”

Since 2011, when Portas was tasked by the coalition government with fixing the problems of the high street, its decline has continued, and some of the problems will be exacerbated by the crisis. She notes councils will be strapped for cash, so things such as parking charges, which have perhaps deterred shoppers, are unlikely to be scrapped any time soon.

The recession that followed the banking crisis led to the rise of Lidl and Aldi, while Poundland and Primark also prospered. She says that, this time around, that kind of retailer will be important again. “There’s going to be a real polarisation from those who have and those who have not,” she says. “You’re going to see a real deep discounting happening at one end, where people are having to buy from those institutions. At the other end, there is going to be a growth in people buying and wanting brands that reflect their values.”

For those who can afford to shop around, the companies that have proved heroes could find that the goodwill towards their brand lasts. “We keep a list in our agency of ‘retail v corona’ – who’s doing well and who’s not,” she says. She doesn’t divulge who has made it on to the list, but on social media it is clear that some companies have tarnished their reputations in the way they have reacted to the crisis, usually in their treatment of staff, while others have impressed people. In the early days, JD Wetherspoon and Waterstones both found their names preceded by #boycott on Twitter, after staff raised concerns about having to work. In contrast, the repair shop Timpson has won praise for its approach – topping up pay for furloughed staff so their income is not reduced.

The idea that shoppers may be alert to how businesses treat them, their workers and the planet plays into something Portas was already talking about before all of this began. In a recent TEDx talk, she outlined her vision of a “kindness economy” where businesses thrive because they respect people and the environment.

Today, she points to discounts for care workers and NHS staff as examples of this. “You look at the Met Ball and think: ‘All of that stuff has been given to you free,’” she says, almost in horror, adding that maybe, instead, “businesses, like the supermarkets, those everyday businesses, will say: ‘Actually, no. We’re going to do acts of kindness and decency with integrity, and give those discounts not to the people who have all the money, but to those who don’t.’”

When she put together the high street report in 2011, “they would say to me: ‘Have you spoken to Sir Philip Green? Have you spoken to Sir Terry Leahy?’” And it was those at the top who had all of the power. Now, she says, we are what she calls more “sentient” consumers, and businesses need to reflect our concerns to attract our money.

She references Mark Carney, the former governor of the Bank of England, who recently suggested the shift in values that would be sparked by the crisis. Writing in the Economist, he said: “Fundamentally, the traditional drivers of value have been shaken, new ones will gain prominence, and there’s a possibility that the gulf between what markets value and what people value will close.” With this in mind, Portas says: “Every £1 is a vote, a vote for how we want to live.” 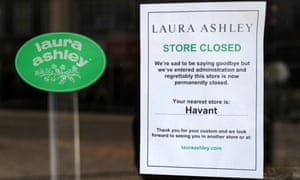 Although, during the lockdown, some spending has moved online, Portas says there is a “power” to bricks-and-mortar shops: “If [people] do come into your store, they’re two-and-a-half times more likely to buy.” But some retailers are not delivering places that people want to go to.

One thing she talked about in 2011 was support for small, local businesses. And it seems that the crisis has seen us turn to them in droves – according to Barclaycard, spending at local off-licences, greengrocers and convenience stores rose by almost 40% in April. While this may have been fuelled by the difficulty of getting a supermarket delivery slot without setting your alarm clock for 4am, it may also have changed our shopping habits. A separate survey by the card provider found that many were planning to increase their spending at local butchers, cafes and farmers’ markets in the future.

Portas says the crisis has changed the mindset of some of these businesses and talks enthusiastically about examples she has seen in her local community. “Many of them have woken up to: ‘Actually I can do deliveries. I can get a digital presence,’” she says. “I was talking to [a bookshop owner] the other day, and they said: ‘I’d never had a website before and I’ve set it up, and I’ve already taken 25% of what I took last year. And I’m able to deliver the next day in the way that Amazon can.’”

She sees these shops as key to innovation on the high street. “I’m calling them the local disruptors,” she says. “They are the ones who have learned from this, and they won’t go back.” She describes the owner of an independent restaurant she knows is struggling because there is still rent to pay despite being closed, but has had a fantastic idea to help it survive. For £50 a year, customers can join a club and get a range of benefits – priority booking, a 25% discount once a year for a birthday meal, a bottle of wine at cost price.

“There’s going to be a real hyperlocal subscription service,” she says. Neighbourhood grocers, wine shops and the like who are already delivering should consider offering a regular service for customers. “You may have people thinking: ‘I don’t want to go out and get my food. If I can get that straight from the grocer, picking it for me, there are fewer people who have handled that and that’s going to be delivered to my door. Maybe that’s going to cost me an extra five quid – but you know what? I’m going to go for that because of the time I would spend otherwise.’”

For large and small businesses, what has happened over the past two months will yield a legacy. “I do think that what will come out of this is memories of the businesses that helped us through it … and I think those memories will shape our decisions in the future,” she says. “That support you have for businesses that were there when you needed them, and were behaving well … that emotion goes deep.”

She adds: “And, you know, some big players have not been there, so it’s going to be very interesting.”

• Mary Portas is the founder of Portas, a creative consultancy that explores the future of shopping and living.