As Australia began to take the threat of COVID-19 seriously, there was one podcaster who instantly sprang to mind – and it was not an obvious choice.

With the pandemic becoming too large to comprehend, a niggling question remained: why did the AFL choose to continue playing footy? They’ve since reversed the decision and the 2020 season has been cancelled, but last Friday, Emma Race, host of AFL podcast The Outer Sanctum, had some answers. 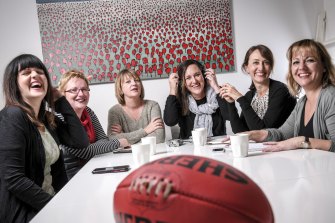 “I feel uncertain about the games going ahead and know the AFL do too, but … I guess our job is to support the players and the fans,” said Race at the time, before the season halted.

Examining footy within the context of the wider community, as Race immediately did in this instance, has kept me a loyal listener over the years. The Outer Sanctum is such a refreshing change to the pantomime that makes up most of televised football shows and commentary.

“We all found it really ironic when AFLX was created, or when the AFL went to China to play games, all those kinds of things were about trying to find new audiences. We just sat there thinking, you've got a whole audience under your fingertips so desperate to be invited into the conversation,” she said about the host of female supporters.

Downplaying the size of her audience, Race says: “We pretty much know them all by name. The community is so dense, and we feel so responsible for pulling them together.

“I feel like there's a real focus on numbers in podcasting, but the depth of relationship is so more important. The stats that we hear from the ABC is that people listen [all the way through] each episode and they go back and listen to old episodes. That's not what a lot of podcasts really have.”

The launch of AFLW in 2017 has reinvigorated the game for so many fans and The Outer Sanctum has been there from the start, introducing us to new superstars like Daisy Pearce, Tayla Harris and Darcy Vescio.

“It's a total game changer. We have all just fallen in love with the game. There's two of us in the podcast who, if the planets that aligned, I think we would have quite fancied ourselves as potential players. But there's something really visceral for us in watching women's bodies play the game that we love.“

“Footy’s such a pillar of our society and we love it so much, and to think that we have loved it and handed over money for so many years to something that we were excluded from. It now seems kind of surreal.”