Groups of ultra-Orthodox Jews have held prayer meetings in Melbourne this week in defiance of strict social-distancing rules designed to prevent the spread of coronavirus.

State MPs blasted the the groups who met late at night in small private venues to conduct daily "minyan" prayers, a type of worship that requires the presence of 10 or more Jewish men. 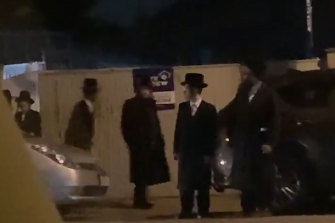 The gatherings have raised concerns about the spread of the virus in the Jewish community.

Local MP David Southwick, who referred the matter to police, said it was "appalling that people are not following the rules and putting lives in danger".

Witnesses said that on Wednesday night, dozens of men entered a side entrance to a home in St Kilda East.

They said the men prayed for more than an hour in a courtyard – shielded by a large bedsheet that blocked the view of onlookers – before dispersing after 9pm.

Witnesses say they called police several times requesting the gathering be broken up. Police said they would send someone to investigate but officers did not arrive until after the men had left.

Two similar gatherings took place on Tuesday night at another location in St Kilda East, a day after Prime Minister Scott Morrison announced all churches, mosques, synagogues and other places of worship must shut.

The Age made repeated attempts to contact organiser of the prayer group, but phone calls and text messages were not returned.

Mr Southwick and Josh Burns, the Labor federal MP for Macnamara, whose electorate also covers St Kilda East, have united to urge everyone to follow the restrictions laid out by governments and health authorities.

Mr Burns has written to the prayer group's leaders telling them to shut down the meetings.

"All places of worship must be suspended during coronavirus – no exceptions," he said.

"I'm extremely grateful to the vast majority of the community who have done the right thing. This is a small minority, and it will be shut down."

Conducting daily prayers with 10 or more people is an important ritual for the Orthodox Jewish community, and the closure of synagogues has pushed some to establish improvised places of worship.

Many Jewish people are gathering online for prayers to avoid face-to-face contact, or not gathering at all.

The prayer groups in St Kilda East have been organised by members of the Satmar Hasidic sect, an offshoot of the Adass grouping.

Last week the chief rabbi of the Congregation Adass Israel, Rabbi Shlomo Kohn Shlita, sent a letter to his congregation instructing them to pray at home rather than in minyanim – quorums of 10 men.

"One should pray at home until the doctors say the pandemic has passed … The danger negates the requirement to pray with a congregation," he wrote.

In a statement, the Rabbinical Council of Victoria said all synagogues were complying with the directive to close their doors, and criticised the small minority who were holding private gatherings.

“We decry and condemn anyone who breaches these guidelines and places the health of the community at risk,” the statement said.

Influential community leader Manny Waks, who noted that in Israel a large proportion of coronavirus infections were transmitted in synagogues, said the St Kilda prayer groups were "endangering themselves and the whole of society".

"This is not the religious thing to do," he said.

Glen Eira Council is investigating whether the prayer group had a permit to use a private venue as a place of worship.

Public health officials in New York have this week raised alarm at the rapid spread of COVID-19 in the Hasidic Jewish community.