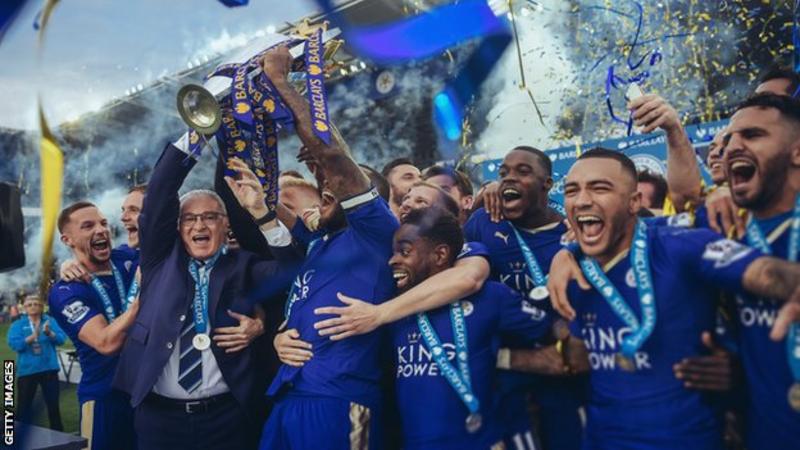 They are some of the Premier League’s most iconic and enthralling moments, but ones we would have been denied had the seasons in which they occurred been halted with nine games to go.

The Premier League still intends to complete this campaign, but with leagues cancelled around Europe because of coronavirus, an aborted season in England’s top flight remains a possibility.

As we await a safe conclusion to the 2019-20 campaign, BBC Sport takes a look back at some of the late-season highs and lows to see what football loses when the business end is stripped away.

The closing strait – when trophies are up for grabs, stakes and emotions high, nerves fraught and actions loaded with consequence.

On a simple, surface level, stripping Premier League seasons of their final nine games inevitably leads to the loss of many of the division’s defining moments.

The most obvious example being the one that usually tops most people’s “greatest” list – Sergio Aguero’s winner against QPR from practically the final kick of the 2011-12 season.

As well as losing perhaps the most dramatic single moment in the league’s history, ending that season with nine games left would also likely have denied City their maiden Premier League title, handed the trophy to Sir Alex Ferguson’s side and altered the course of history.

Other clubs, too, would be denied one of their defining moments. Blackburn would still have won the title in 1994-95, but they would never have experienced that dizzying, dazzling rollercoaster afternoon at Anfield, where they would lose to Liverpool but West Ham would do them the ultimate favour by holding rivals Manchester United to a draw.

Arsenal fans would have at least one less piece of iconic commentary to savour, as Tony Adams (“put through by Steve Bould… would you believe it?!”) wouldn’t have been given the opportunity to cap Arsenal’s 1997-98 title win with a goal against Everton.

Speaking of the Gunners, they would forever have to stomach the asterisk that would attach itself to their remarkable, iconic Invincibles season. Yes, technically unbeaten, but they didn’t play the last nine games.

Other such iconic incidents would also be lost, some with culture-changing consequences.

Mentioning “Fergie Time” to someone would prompt only blank stares in return as the two Steve Bruce headers against Sheffield Wednesday that contributed so heavily to the term being coined would never have happened.

In addition, we’d also probably never have seen Brian Kidd lost in a whirlwind of emotion, dropping to the Old Trafford turf on his knees and brandishing his fists wildly to the sky.

For Steven Gerrard, an earlier finish would have led to fewer sleepless nights.

Liverpool would still miss out on the 2013-14 Premier League title if the season were ended after matchweek 29 (although the trophy would have gone to Chelsea as opposed to Manchester City), but the Reds skipper would have been spared his ill-timed slip that allowed Demba Ba to score Chelsea’s opener in the Blues’ win at Anfield in the 36th game of the season.

In fact, Gerrard’s final lasting contribution to that campaign would have been the kiss he planted on that TV camera after scoring two penalties in a famous 3-0 win against Manchester United at Old Trafford.

And then there are the great escapology acts that take place when the heat is really on.

Using the unweighted points-per-game-played system adopted by League Two and the Scottish Premiership following the decision to end their seasons, we can get a sense of which clubs could have gone down had previous campaigns been curtailed.

These include West Brom, who would have been relegated in 2005, when in reality they escaped on the final day having started it bottom. Fulham would have gone in 2008, unable to play a final five games from which they earned four wins to survive. While in 2007, Carlos Tevez would be denied the chance to save West Ham, who would go down while Sheffield United survived.

‘I’d love it if we beat them, love it’ – a lost iconic outburst? 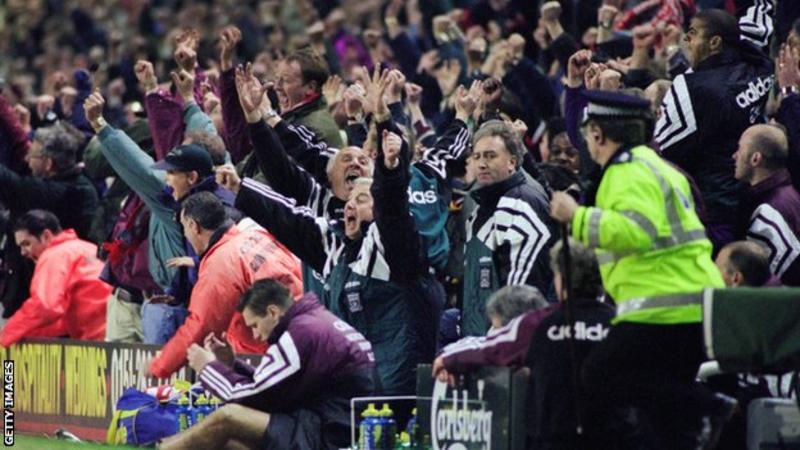 There would be an element of swings and roundabouts for football fans had the 1995-96 season ended after matchweek 29.

Were that the case we would never have witnessed arguably the greatest Premier League game, when a title-chasing Newcastle – led by the eternal entertainer Kevin Keegan – traded haymakers with Liverpool before losing 4-3 to a last-minute goal.

Without this game, we would also lose that indelible image of Keegan slumped over the advertising boards while Anfield erupts around him following Stan Collymore’s winner – a testimony to the emotional impact of sport.

Even more of a loss to the folklore of English football would be Keegan’s infamous rant after the 1-0 win at Leeds, when he pointed down the camera and declared in the general direction of Manchester United boss Ferguson: “We’re still fighting for this title, and he’s got to go to Middlesbrough and get something, and… and… I’ll tell you, honestly, I will love it if we beat them, love it!”

However, if that season had ended after matchweek 29 and the title awarded by points per game, Newcastle would have done just that.

Their once 12-point lead over the Red Devils had been whittled down, but they were still a point ahead of Ferguson’s side with a game in hand in late March.

A Newcastle title win, but one that would have been claimed in sterile, underwhelming circumstances. Is this worth more than two instinctive outbursts of raw emotion, even if these are in response to glorious failure?

Changing the course of history

It is, of course, possible to go beyond the immediate impact of losing the final nine games of a season and hypothesise alternate histories that further deprive the game of its glorious facets.

A curtailment of the 2014-15 season with nine games to go would have left the Foxes stranded at the bottom of the table and consigned them to playing Championship football.

In reality, though, they clawed their way to safety courtesy of a remarkable seven wins from nine games before going on to produce one of sport’s great fairytale stories the following season by defying 5,000-1 odds to win the top-flight title.

And you can go further.

Chelsea’s qualification for the Champions League in 2002-03 was reportedly crucial to Russian oligarch Roman Abramovich taking over the club and embarking on an unprecedented spending spree that has brought them 16 major trophies in 17 years.

But if the season had ended after 29 games, meaning the Blues had finished fifth instead and missed out on Europe’s top club competition, would Abramovich have looked elsewhere to invest his billions?

In 1989-90, it is a widely accepted story that Ferguson was perilously close to being sacked by Manchester United midway through the season but saved himself, initially with an FA Cup third-round win over Nottingham Forest.

They would go on to win the Cup that year – the first of 25 major trophies under the Scot in an unrivalled 27-year period of dominance. 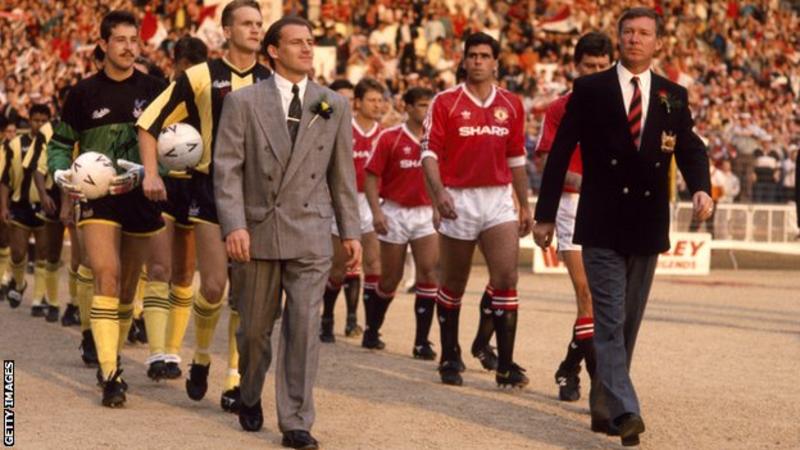 But what if the 1989-90 season had been halted with United yet to play their FA Cup sixth-round tie and only just starting to show signs of life following a run of 11 league games without a win? Would the United board have seen it as a fitting time to make a managerial change and thus alter the whole history of the Premier League?

And then there are the individual achievements – smaller personal glories, woven into the fabric of the game that would be torn from the grasp of deserving players.

Every forward would be a bit worse off but Alan Shearer’s all-time Premier League goals record would be closer to 200 than its current tally of 260.

Gareth Barry’s all-time appearance record would potentially be 180 games lighter than its current number of 653.

Spare a thought for Kevin Phillips, who would no longer be the only Englishman to win the European golden shoe, having only scored a still admittedly healthy 25 goals in 1999-00.

And James Vaughan would no longer be the answer to a long-standing quiz question, his strike against Crystal Palace on 10 April 2005 obliterated from history, making the evergreen James Milner the Premier League’s youngest ever goalscorer.