One of Daniel Andrews’ closest tactical and factional allies has announced his resignation from the Victorian Parliament after serving more than two decades as an MP.

The government’s leader in the upper house, Gavin Jennings, told the Victorian Parliament he had served his final day as he gave his valedictory speech on Thursday afternoon. 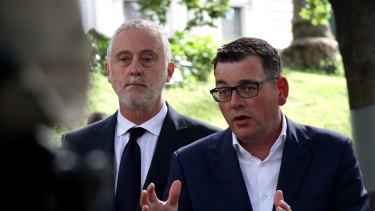 “From my first speech until now my last, no one has really bothered to mess with me while I’m on my feet in the Legislative Council,” Mr Jennings said in his valedictory speech.

“Although some usurpers took the opportunity to exclude me from the chamber … but clearly all that is forgotten now, and I will be forgotten soon because today is my last day.”

Mr Jennings said his family was "so poor" but when he declared – as a grade-two student – that he would go to university, his mother believed in him.

He lamented the education system, which he said did not "provide personalised learning or account for the wide range of talents and attributes that just one person might have, let alone across an entire classroom".

Mr Jennings was first elected in 1999 to the now-abolished upper house seat of Melbourne Provinces. He has been the south-eastern metropolitan region MP since 2006.

The 62-year-old has served on the front bench as a minister for aged care, community services, environment and climate change, innovation and most-recently for Aboriginal affairs.

Mr Jennings was regarded as a shrewd parliamentary tactician within Labor circles.

He most notably steered the Andrews Labor government’s landmark assisted dying legislation through the upper house, and on Wednesday announced Victoria would finally develop a redress scheme for the stolen generations.

"On January this year … as our state was burning and our community was still under great threat, I received an email from Tina Wright who was writing to me urging our government to finally introduce the redress scheme for the Victorian members of the stolen generations," Mr Jennings said on Thursday.

"She reminded me of the failing health of her mother Eunice Wright who would suffer decades of despair and profound sense of loss as one of those stolen children, with tears in my eyes I instantly responded to Tina's email to say that from my perspective, there would be no greater priority for me this year than to establish the redress scheme."

The senior Labor minister was suspended from the Victorian Parliament for six months in 2016 when he refused to produce government documents related to the Victorian Comprehensive Cancer centre, Melbourne Grand Prix and planned coal projects.

"On behalf of our party and Parliament, I'd like to thank Gavin for his unwavering passion, principle and purpose in serving the working people of Victoria," Mr Andrews said in a statement.

Mr Jennings is a central figure in the Left faction and was previously faction secretary before entering the Victorian Parliament.

He is expected to be replaced by former MP and member of the Left faction Lee Tarlamis who served a four-year term before losing his seat.

Upper house President Shaun Leane asked members not to embrace Mr Jennings after his valedictory speech to prevent the possible transmission of coronavirus.

All upper house MPs gave a standing ovation to Mr Jennings at the end of his speech.