Edward Gallagher served nearly two decades in the United States military in relative obscurity. That all changed when President Donald Trump used his powers as Commander-in-Chief to aid the Navy SEAL.

The veteran warfighter, with four combat tours across Afghanistan and Iraq, was facing a court martial on charges stemming from his final deployment. The most serious was an accusation of premeditated murder for stabbing and killing an ISIS fighter in 2017.

This week on 60 Minutes, contributor and CBS News national security correspondent David Martin spoke with Gallagher in his first television interview about the day that changed his life.

Gallagher was arrested in September 2018. The formal charges brought against Gallagher at his court martial read:

The general court martial jury was comprised of seven members of the military. If found guilty of murder, Gallagher faced the possibility of life in prison.

Awaiting the trial, Gallagher spent 201 days in the brig until President Trump intervened and ordered the Bronze Star recipient to “less restrictive confinement” in recognition of his prior service to the nation.

In honor of his past service to our Country, Navy Seal #EddieGallagher will soon be moved to less restrictive confinement while he awaits his day in court. Process should move quickly! @foxandfriends @RepRalphNorman

The trial began on June 17, 2019 and lasted for 10 days. After eight hours of deliberation, the jury acquitted Gallagher on all but one of the charges after another member of the SEAL Team 7 platoon testified, under an immunity agreement, to being the murderer.

The lone guilty verdict came for taking a photo with the dead ISIS fighter. It carried a maximum sentence of four months in the brig. Gallagher walked free for time served, and he credits President Trump’s actions for his freedom. 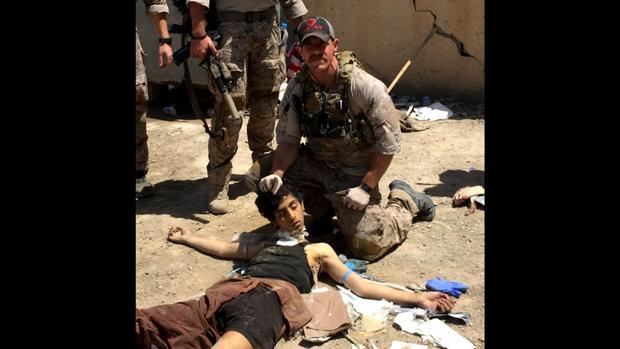 “If the president hadn’t intervened in any way? No, I believe I’d be in prison for life,” Gallagher told 60 Minutes. “I was able to get out of the brig and actually properly defend myself.”

Gallagher’s defense lawyers were paid for, in part, by the non-profit Navy SEALs Fund. The financial assistance helped Gallagher afford the services of his defense team, including Timothy Parlatore, Bernard Kerik and Marc Mukasey.

Parlatore is a Naval Academy graduate turned lawyer who was brought into the case by Kerik. Kerik is a former New York City police commissioner who pled guilty to felony tax fraud and lying to White House officials in 2009. The President granted Kerik clemency in February. Mukasey also represents the Trump organization, most notably in a case brought by the Manhattan District Attorney seeking the President’s tax returns. 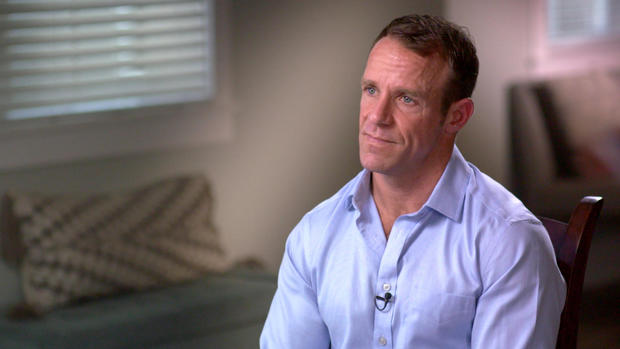 Mukasey says the President’s actions did not affect the outcome of the Gallagher trial.

“We tried a real murder case … [with] prosecutors that, as far as I could tell, were apolitical, and defense lawyers that were apolitical,” Mukasey remarked to 60 Minutes. “It was fought on the field of legal battle. And that’s where it was won and lost.”

In an interview with Mukasey, correspondent David Martin pressed him on his connections to the President and whether Trump played a role in the case.

David Martin: Did you talk to the president about this case?

Marc Mukasey: I don’t disclose who I talk to with respect to clients. He congratulated me after the verdict.

David Martin: Well? So you did talk to the president about this case?

Marc Mukasey: Not during its pendency.

David Martin: But after the verdict, you talked to him about this case.

Marc Mukasey: That’s all I’m going to say. Many people congratulated me.

Congratulations to Navy Seal Eddie Gallagher, his wonderful wife Andrea, and his entire family. You have been through much together. Glad I could help!

But the Gallagher case was far from over. The court martial found Gallagher guilty of “conduct prejudicial to good order and discipline” for posing with a dead ISIS fighter. He was demoted a rank. Additionally, the Navy moved to assemble a Naval Special Warfare review board to determine whether Gallagher was permitted to retain his Trident pin, a symbol of the elite status of Navy SEAL team members.

The President intervened again on behalf of Gallagher, this time using his power as Commander-in-Chief to restore the Navy SEAL’s rank and ensure he kept his Trident pin.

In an effort to allow the Navy to follow its standard procedure, Secretary of the Navy Richard Spencer contacted the White House directly, requesting that the President not interfere in the matter. The appeal was rebuffed and cost Spencer his job for going behind the back of Secretary of Defense Mark Esper.

On his final day at the Pentagon, Richard Spencer spoke with David Martin and said that the President’s actions send a message to the troops that they can “get away with things.” Spencer suggested matters of discipline be handled internally by senior enlisted members of the military who serve on review boards.

“I have not been personally asked to campaign for his reelection from him,” Gallagher told 60 Minutes. “But if he asks me, if he wants me to help out in any way, yes. I would. He helped save my life.”

The video above was produced by Will Croxton and Brit McCandless Farmer. Keith Zubrow was the associate producer and Will Croxton was the editor.