Young schoolchildren are missing out on the equivalent of one full night of sleep a week, with their sleep worse the more time they spend on social media.

Children aged ten are recommended to get nine to 12 hours of sleep a night, with less sleep linked to poor performance at school and risky behaviours.

But a study found ten-year-olds who use social media more have worse sleep, and that this age group now only get 8.7 hours of sleep a night on average.

Added up over a full week, that is the equivalent of one full night’s missed sleep. 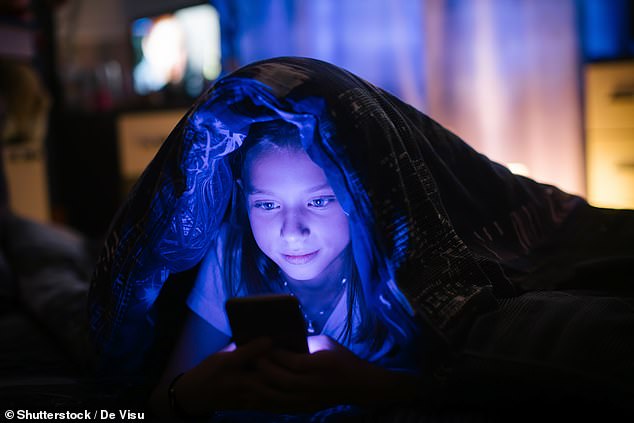 Ten-year-olds who use social media more have worse sleep – with this age group now only getting 8.7 hours of sleep a night on average

How much sleep do children need?

According to the NHS, the recommended sleep durations are:

The study, which is the first to look at social media, sleep and fear of missing out in young ‘pre-teen’ children, found one in eight use social media during the night when they should be asleep.

Dr John Shaw, from De Montfort University, who presented the research at the British Science Festival in Leicester, said: ‘We found 69 per cent of the kids said that they are on social media for more than four hours a day.

‘It is quite terrifying when you think about the level of engagement that they’re having.’

The study, conducted in schools across Leicester, recruited 60 children aged ten, all of whom had access to social media, with 89 per cent of them owning their own smartphone.

Children appear to routinely access social media, despite several sites saying they only allow children above the age of 13 to sign up.

The more time they spent on social media, the worse their sleep quality.

The research assessed schoolchildren’s fear of missing out on social media by asking how strongly they agreed with statements such as ‘I feel disconnected from my friends when I have not logged on to social media’.

This fear, known as Fomo, is believed to help explain why more time on social media is linked to less sleep. 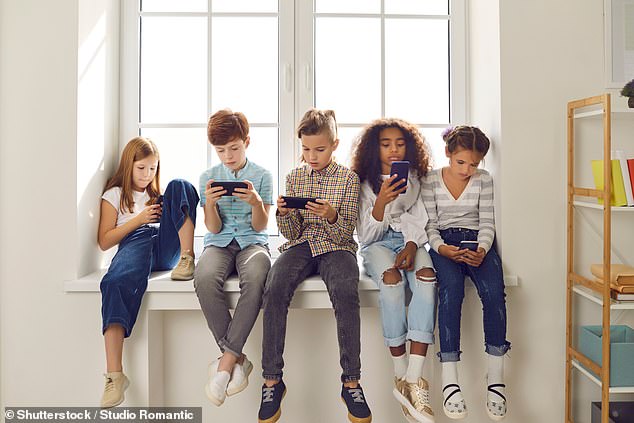 The study found a link between social media and anxiety, which may also help to explain reduced sleep in children

Dr Shaw said: ‘The idea of Fomo is that if you are not online, something is happening, which means that you are not taking part in it.

‘And we see that a lot with the age groups that we are talking about – where they have got established networks of friends, and they want to know what their friends are doing.’

The study found a link between social media and anxiety, which may also help to explain reduced sleep in children.

Experts are concerned that children struggling with worries about social media may stay up much later than is healthy just so they can keep checking their phones.

The study, which has not yet been published in a scientific journal, found around two-thirds of children used social media in the two hours before bed.

HOW MUCH SCREENTIME SHOULD TEENAGERS GET?

A recent study by San Diego State University found that the happiest teenagers were those who limited their daily digital media time to slightly less than two hours a day.

Looking at historical trends from the same age groups since the 1990s, the researchers found the proliferation of screen devices over time coincided with a general drop-off in reported happiness in American teenagers.

Study participants born after 2000 were less satisfied with life, had lower self-esteem and were unhappier than those who grew up in the 1990s.

Since 2012, the average teenager’s life satisfaction, self-esteem and happiness has plummeted.

That year marked the point when the proportion of Americans who owned a smartphone rose above 50 per cent for the first time.