A psoriasis sufferer has revealed how a £15 cream made from a plant root has helped improve her skin in a matter of weeks.

Sophia Holmes, 38, from Manchester, first developed psoriasis back in 2012, which started on her scalp.

‘The scale build-up on my scalp was really thick and would crack and make my skin bleed,’ she explained. ‘It also started to spread around my hairline, onto my face and in and around my ears.’

However, after several steroid creams and lotions prescribed by a dermatologist failed to clear up her symptoms, Sophie found an unlikely solution in the form of £15 Oregon Rescue Serum. 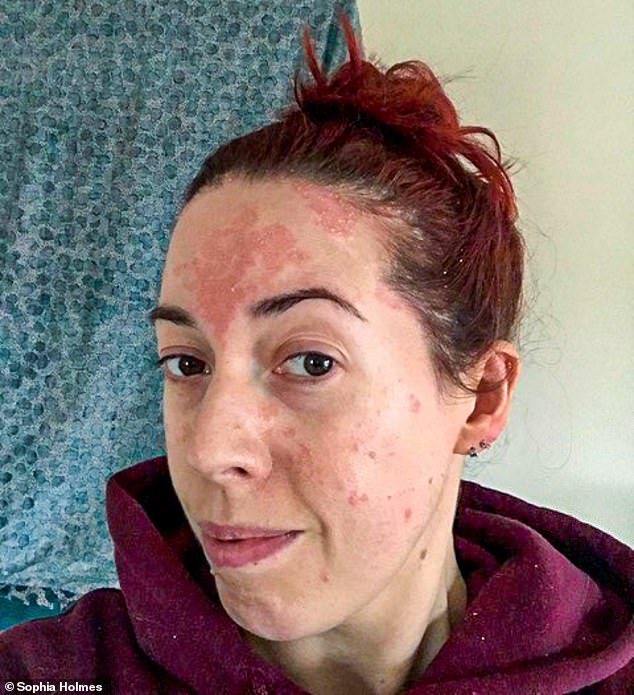 Sophia Holmes, 38, from Manchester, has claimed a cream made from a plant root has helped improve her skin in a matter of days. Pictured, before applying the treatment 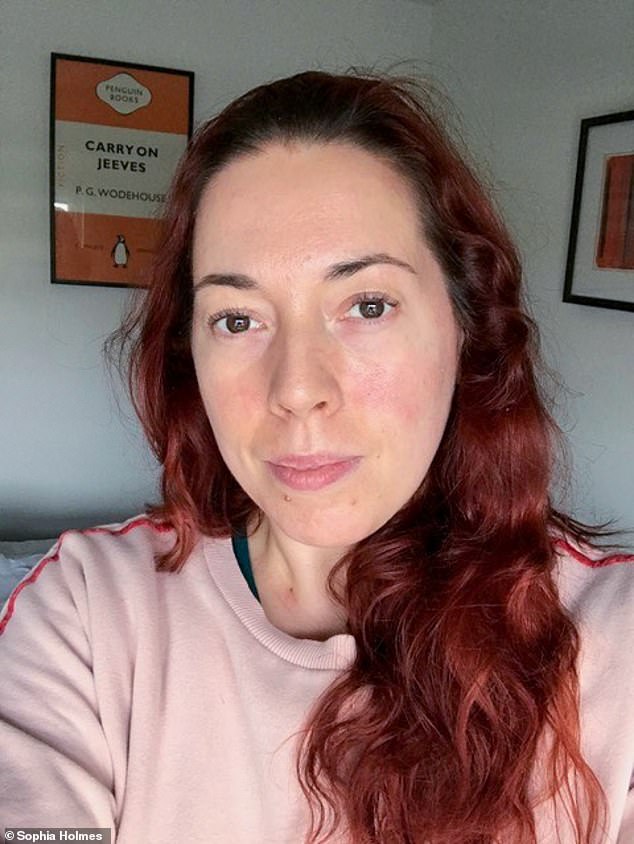 While steroid creams and lotions prescribed by a dermatologist failed to clear up her symptoms, Sophie found an unlikely solution in the form of a £15 serum. Pictured, days after applying the product

At first, Sophie thought her psoriasis was just dry skin or a reaction to a shampoo, but then she realised it is often triggered by a traumatic or stressful emotional event or an illness.

‘I think my psoriasis was triggered in 2011 when my Dad was diagnosed with terminal prostate cancer,’ explained Sophie, a TV production manager. ‘By 2012 he was very ill and he passed away at Christmas that year.’

‘During this period my psoriasis got quickly worse, my scalp was incredibly sore and painful, and I was struggling to treat it. It had also begun to spread onto my shins and chest.’

Sophie went on to explain how her maternal grandmother apparently suffered from psoriasis all her life too, so she thought perhaps it was inevitable she was going to get it at some point.

‘I didn’t do anything for a while when I first got psoriasis because I didn’t really know what it was,’ she said. 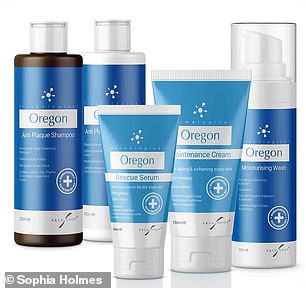 Sophie found an unlikely solution in the form of £15 Oregon Rescue Serum (pictured, the skincare range)

‘At the time, I was completely devastated by my dad’s cancer and wasn’t really thinking about myself.’

‘I slathered cream all over my scalp and this seemed to ease the symptoms at first, but it just kept getting worse and worse.’

Sophie was eventually diagnosed with psoriasis in the summer of 2011 by her GP, and was prescribed a steroid ointment and scalp lotion.

‘When I first used the lotion on my scalp it cleared up everything, and I was absolutely thrilled, but I had no idea that this would only last a matter of days, and that soon the psoriasis would be back,’ she explained.

In a matter of months, Sophie claims the steroid ointment and scalp lotion wasn’t working at all – and in 2012, she went back to the GP and was referred to a dermatologist. 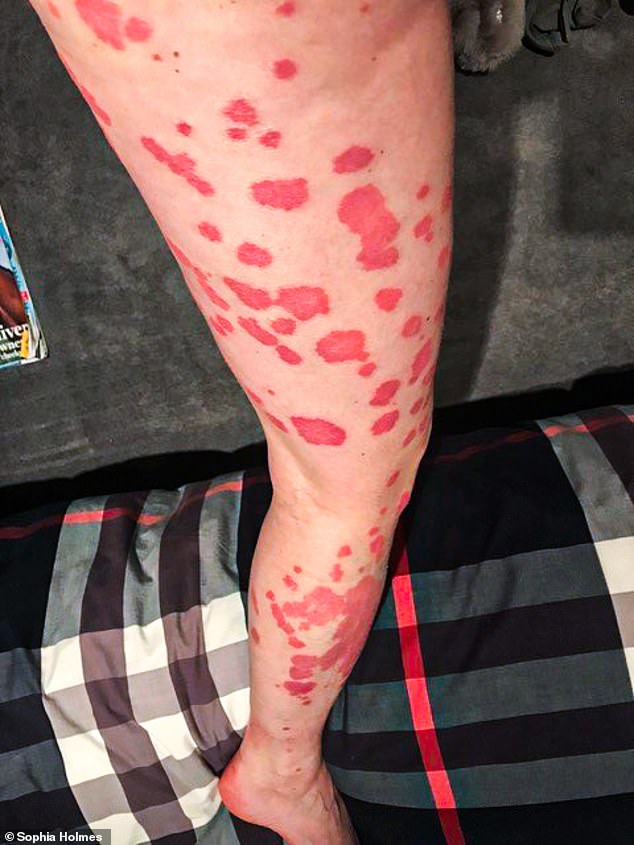 Sophie was eventually diagnosed with psoriasis in the summer of 2011 by her GP. Pictured, her leg before applying the serum 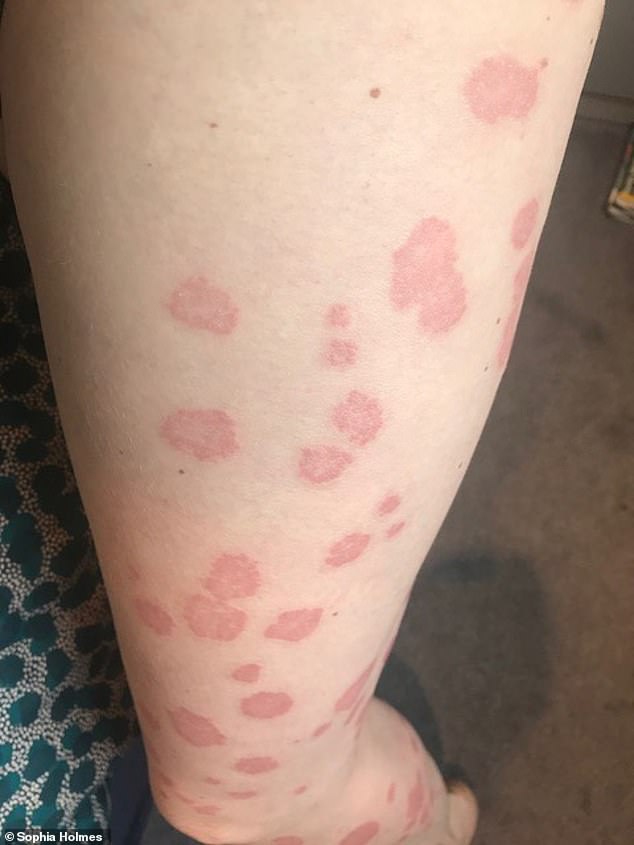 Within two weeks of applying the serum, Sophie says she could see that the red spots on her legs were starting to heal from the inside (pictured)

But despite being given a range of different products to apply to various parts of her body, her psoriasis continued to get worse and spread.

‘I’d say that it affects about 75 per cent of my body,’ she explained. ‘By 2017 my psoriasis had spread so much that I was referred for UVB therapy which did improve things, but again the psoriasis came back. I had a second course of UVB therapy in November 2018.’

HOW DOES THE PLANT ROOT HELP?

A skin care range containing a plant extract called Oregon Grape Root (OGR), plus other helpful ingredients including caffeine, have been found in a UK trial to be highly effective in reducing the symptoms associated with the skin condition psoriasis.

OGR is a native plant of North America and has been extensively examined as a treatment for psoriasis in several published studies.

These studies have found that compounds isolated from extracts of OGR possess inhibitory activity against Lipoxygenase (an enzyme involved in psoriatic skin cell production).

At the cellular level, OGR has been shown to guard against accelerated activity during the process of keratinocytes (skin cell production).

Other published studies have also highlighted how caffeine can also help inhibit the symptoms of psoriasis when used topically.

She continued: ‘I was incredibly conscious of scratching and picking my scalp and leaving flakes of skin everywhere, especially at work.

‘I felt pretty depressed about it and would style my hair so that it hid the psoriasis on my hairline.’

‘I’d never put my hair up in a ponytail. I felt disgusting and was so embarrassed by it.’

Sophie says the worst flare up she experienced was in summer 2018.

‘I was incredibly stressed at work and dealing with several complex issues,’ she explained.

‘I was exhausted and run down, feeling low and suffering with anxiety. I was also very hot because I always covered up from head to foot in the summer.’

‘I was due a two-week holiday when I noticed I had lots of little dots all over my arms, back, neck, legs and torso, and within a couple of days these had grown and spread. I was in absolute agony.’

‘My skin felt like it was on fire. I was in despair because this wasn’t like anything else I’d experienced before, and my psoriasis had spread to new areas.

She continued: ‘My two-week holiday was awful. I couldn’t sleep, was anxious constantly and struggling to relieve the pain and itching.’

‘I had booked a mini break away with a friend but I was so low. I tried to look like I was enjoying myself, but I remember how truly awful I felt. It was beautiful weather, but I covered myself head to toe and suffered the heat as I couldn’t bear people seeing my skin.’ 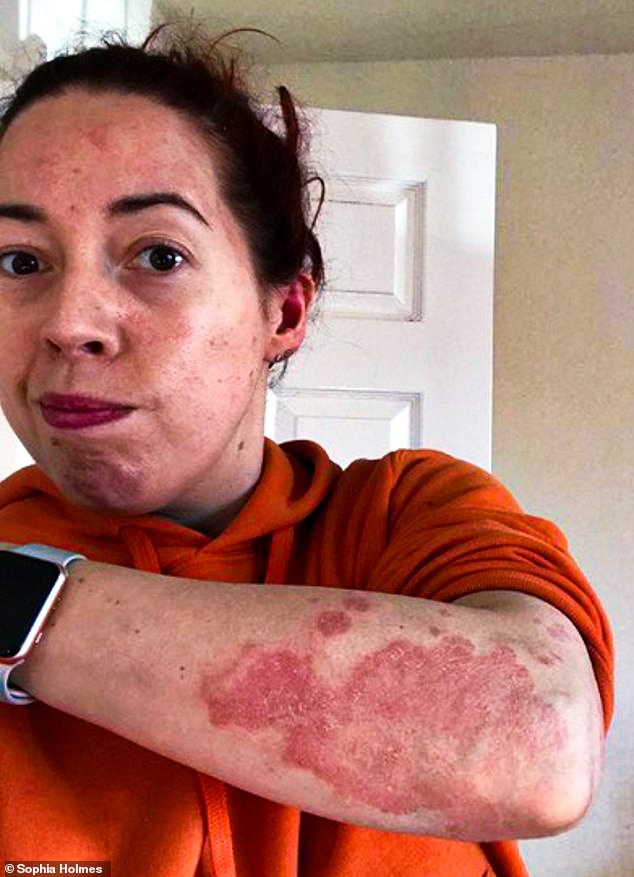 Sophie says her worst flare up was in summer 2018, where her skin felt like it was on ‘fire.’ Pictured, her arm before applying the product 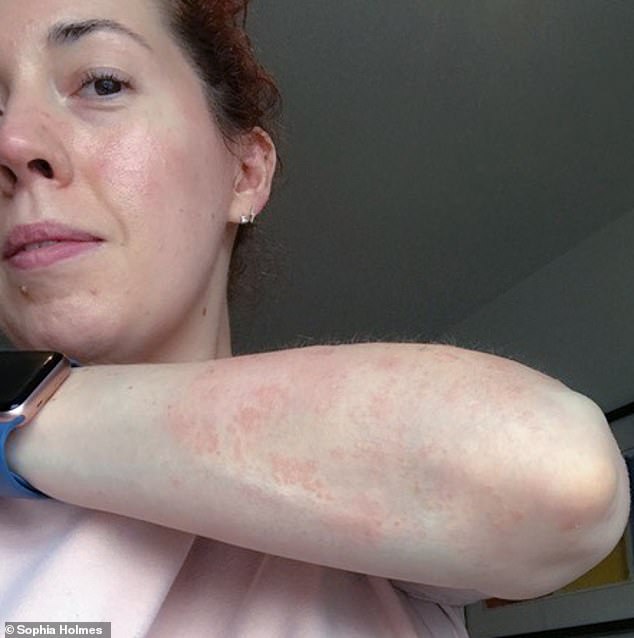 The TV production manager feels ‘very fortunate’ that by chance she discovered the Oregon products before the coronavirus pandemic. Pictured, after applying the serum

Due to fears about the long-term damage to her skin, Sophie stopped using steroid creams after more UVB treatment in January 2019, and was determined to find another, more natural way of treating it between UVB therapy sessions.

‘My psoriasis has undoubtedly affected my mental health and confidence,’ she explained. ‘I started suffering with anxiety about 18 months ago. I got divorced a few years ago, and I’ve not been in a relationship since.’

‘I’m scared of the reaction a potential partner might have to my psoriasis and feel worried that nobody will ever find me attractive because of it.’

Psoriasis is an autoimmune condition that affects the skin and sometimes the joints.

Around two per cent of people in the US and UK suffer from the condition.

Psoriasis occurs when a person’s skin replacement process takes place within days rather than the usual 21-to-28 days.

The accumulation of skin cells builds up to form raised plaques, which can be flaky, scaly and itchy.

Psoriasis arthritis can occur in the joints near affected skin, causing them to become tender, swollen and stiff.

Anyone can suffer, but psoriasis is more common in people in their late teens-to-early 30s or those between the ages of 50 and 60.

Psoriasis’ cause is unclear. Flare-ups can be triggered by stress, skin injury, hormonal changes and certain medications.

It is not contagious and there is no cure.

She continued: ‘I’ve been trying hard to learn to love and accept myself and my skin, and try to remember that I’m more than my psoriasis, and that somebody will love me for who I am.’

‘Thinking positively has been key to this, along with being part of an amazing and supportive Instagram psoriasis community.’

It was through this community that Sophie found out about Oregon products, which she has been using for almost three weeks now – and started using just before the full extent of the coronavirus hit us in the UK.

‘The first really significant improvements I noticed were a reduction of the redness and itching on my face.’

‘The Oregon Rescue Serum and Skin Maintenance cream are the only products I’ve used that have improved my skin and so quickly too.

‘Within two weeks I could see that the red spots on my legs were starting to heal from the inside – the psoriasis is breaking up and I can see new skin coming through. A patch of very sore psoriasis on my elbow has almost disappeared now.

‘I feel very fortunate that by chance I discovered the Oregon products before this awful situation developed,’ she explained. ‘The fact that my skin is still improving despite the circumstances is a very positive indication of how effective these products are.’

‘So, if any other psoriasis sufferers who are in discomfort at home and are worrying how they will manage their skin if they can’t get to the doctors or can’t access their normal treatments I’d say they are definitely worth considering.’