People with psychopathic personality traits ‘have a disproportionately large impact’ on the COVID-19 pandemic because they ‘fail to protect themselves and others’, study claims

Personality plays a big part in a person’s willingness and ability to adhere to social distancing and other coronavirus-related health guidelines, a study has found.

Researchers found people with psychopathic personality traits such as meanness and disinhibition are more likely to disregard official advice.

An assessment of more than 500 Americans compared adherence to public health guidelines with a comprehensive review of their personality.

A score was given for narcissism, Machiavellianism, and psychopathy — the so-called Dark Triad — as well as agreeableness and conscientiousness.

Dr Pavel Blagov of Whitman College led the study and found a high psychopathic score was linked to a tendency to ignore and breach public health rules.

‘There may be a minority of people with particular personality styles (on the narcissism and psychopathy spectrum) that have a disproportionate impact on the pandemic by failing to protect themselves and others,’ he told PsyPost. 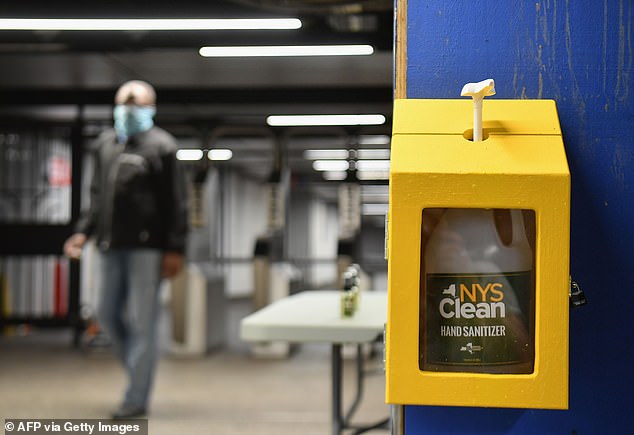 An assessment of more than 500 Americans compared adherence to public health guidelines with a comprehensive review of their personality. Dr Pavel Blagov of Whitman College led the study and found a high psychopathic score was linked to ignoring and even flagrant breaches of public health rules (file photo)

His analysis found the majority of the public were adhering to official social distancing advice in order to to maintain the safety of friends, family and strangers.

However, among people who were not listening to the life-saving advice, a trend was spotted.

The majority of these people scored low for ‘agreeableness’ and ‘conscientiousness’ and higher on the psychopathic sub-traits of meanness and disinhibition.

Human trials of a potential vaccine for COVID-19 will begin in the UK next week.

Imperial College London’s team has built a vaccine which it hopes will provide immunity against the SARS-CoV-2 virus, which causes COVID-19.

The vaccine will enter phase one and two human clinical trials with 300 people on June 15, the university says.

Today, the UK recorded 55 more Covid-19 deaths in the lowest daily toll since before lockdown.

People that scored highly for these psychotic traits were found to be uninterested in social distancing and other hygiene measures put in place to curb transmission of the coronavirus.

People who scored highly for meanness and disinhibition are also more likely to touch or sneeze on regularly used surfaces in public, the study found.

‘People scoring high on these traits tended to claim that, if they had COVID-19, they might knowingly or deliberately expose others to it,’ Dr Blagov told PsyPost.

The findings are still preliminary and have been published before peer-review on PsyArxiv.

The study collected data online between March 20 and 23, before ‘the pandemic had become extremely politicised in the US’, Dr Blaov said.

Personality traits are regularly divided into pre-defined categories and compared to behavioural patterns.

Dr Blagov explains that a person’s personality has long been known to influence their behaviour and attitude to health issues.

Previous research has found people expressing the Dark triad traits sometimes deliberately put the health of others at risk.

This can include unsafe sexual practices while infected with HIV or other STIs.

A separate study published in April found a similar trend.

Lucas de Carvalho from the Universidade São Francisco in Brazil published another pre-print which found extroversion was also a measure of a person’s tendency to stick to social distancing.

‘The findings indicate the importance of acknowledging extroversion and conscientiousness traits as relevant to people’s engagement with the measures recommended for COVID-19 containment.’

WHAT ARE THE FIVE PERSONALITY TRAITS?

The Big Five personality framework theory uses these descriptors to outline the broad dimensions of people’s personality and psyche.

Beneath each broad category is a number of correlated and specific factors.

Here are the five main points:

Openness – this is about having an appreciation for emotion, adventure and unusual ideas.

People who are generally open have a higher degree of intellectual curiosity and creativity.

They are also more unpredictable and likely to be involved in risky behaviour such as drug taking.

These people are self-disciplined and act dutifully, preferring planned as opposed to spontaneous behaviour.

They can sometimes be stubborn and obsessive.

Extroversion – these people tend to seek stimulation in the company of others and are energetic, positive and assertive.

They can sometimes be attention-seeking and domineering.

Individuals with lower extroversion are reserved, and can be seen as aloof or self-absorbed.

Agreeableness – these individuals have a tendency to be compassionate and cooperative as opposed to antagonistic towards other people.

Sometimes people who are highly agreeable are seen as naive or submissive.

People who have lower levels of agreeableness are competitive or challenging.

Neuroticisim – People with high levels of neuroticism are prone to psychological stress and get angry, anxious and depressed easily.

More stable people are calmer but can sometimes be seen as uninspiring and unconcerned.

Individuals with higher neuroticism tend to have worse psychological well-being.