Rats have the same moral dilemmas as humans: Study finds both people and rodents are LESS likely to help an individual in trouble if unhelpful bystanders are nearby

Humans consider ourselves to be smarter and more ethical than other species due to our superior intelligence, but a new study has thrown cold water on that theory.

Researchers studied the phenomenon known as the ‘bystander effect’ in rats, regularly seen in humans, which states that individuals are less likely to help someone in distress if other people around them are being unhelpful.

They found that this behaviour, previously thought to be unique to people, was in fact common in the rodents. 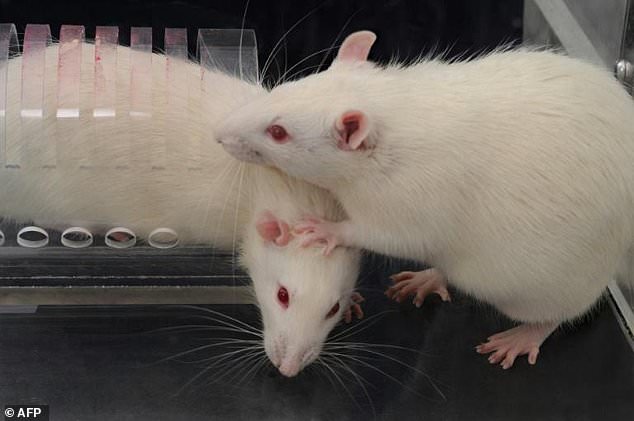 Pictured, a rat trapped in a restrainer as a free rat opens the restrainer door to liberate the trapped rat. Researchers studied the phenomenon known as the ‘bystander effect’ in rats and found it exists

Peggy Mason, a neurobiologist at the University of Chicago and the senior author, told AFP the findings helped explain certain human behaviours such as why police officers fail to intervene when one of their own is engaging in brutality.

The experiment involved deliberately trapping a rat in a cage and seeing if another rodent helped them escape.

When a trapped rat was in a cage with one other individual, the free rat helped out.

One or two bystanders, who were rendered unhelpful by giving them a low dose of the anti-anxiety drug midazolam, were then added to the scenario.

In the presence of these unhelpful bystanders, a rat that had previously been helpful in a one-on-one interaction now stood by idly and did not rescue the subject.

Half a century of research on the ‘bystander effect’ concludes individuals are less likely to intervene during an emergency when in the presence of others than when alone.

According to conventional wisdom, non-involvement is the default response of bystanders during public emergencies.

A recent study has found this may not always be the case.

On the other hand, when undrugged, helpful bystanders were placed at the scene, a rat that had been helpful one-on-one became even more keen on being a good Samaritan.

‘I think this is a very apt study for the times,’ said Mason, pointing to how during recent US protests against police racism, protesters rushed to aid injured peers while police stood by.

‘In the George Floyd case, there were three other police officers, including one who went into the police force to change the narrative about police brutality against black people – and nonetheless, he stood by and did not intervene,’ she added.

Mason likened these officers to the drugged rats, ‘except they didn’t take the chill pill, they took years of training.’

The term ‘bystander effect’ was first coined by psychologists after the 1964 murder of Catherine ‘Kitty’ Genovese in New York, whose death was reportedly witnessed by more than 35 of her neighbors, none of whom intervened.

The story was later found to be highly misleading but the basic finding held up in controlled experiments.