This story was originally published on HuffPost UK.

A stabbing incident in Reading town center on Saturday which left three people dead and three seriously injured has now been declared a terrorist incident, police have confirmed.

Three people were killed and another three have been seriously injured after multiple stabbings took place at around 7pm in Forbury Gardens in Reading’s town center.

Thames Valley Police have confirmed the attack is now being treated as terrorism and that counter-terror police would now be taking over the investigation.

In a statement at New Scotland Yard, he described the stabbings as an “atrocity” and sent his “deepest sympathies” to the family of the three people who died and those who have been injured.

He added there was nothing to suggest anyone else was involved in the and police are not currently seeking anyone else as part of the investigation. 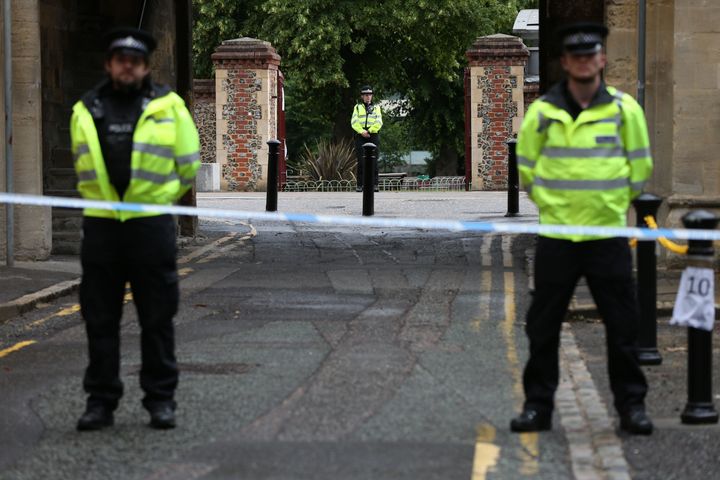 “Yesterday Saturday 20 June, a short time after 7pm, a man ran into Forbury Gardens in the center of Reading and attacked members of the public with a knife,” he said in the statement.

“He left three dead and a number of people needing hospital treatment.

“This was an atrocity, my deepest sympathies go out to the families who will be mourning loved ones today after this horrific act and to everyone who has been affected by it.

“We’re working with a coroner to formally identified all those who have died and to inform and support their relatives.”

Basu added the incident was not connected to a Black Lives Matter (BLM) protest that took place earlier in the day in the park.

He said: “We’re clear that it was not associated in any way with the Black Lives Matter protest which took place peacefully earlier on in the day and which had concluded some hours before this attack took place.”

Police said a 25-year-old man from Reading who was arrested at the scene on suspicion of murder remains in custody. The suspect is a Libyan asylum seeker and mental health is being considered a major factor in the incident, a security source told the PA news agency.

A statement issued on the Thames Valley Police website said: “Counter Terrorism Policing can now confirm that the stabbing incident that happened in Reading last night (20/6), has now been declared a terrorist incident.

“Deputy Assistant Commissioner Dean Haydon, Senior National Coordinator for the Counter Terrorism Policing network, has this morning declared the incident a terrorist incident, and CTPSE will be taking over the investigation.”

Chief Constable John Campbell of Thames Valley Police said: “I am deeply saddened by the events of last night.

“This was a truly tragic incident and the thoughts of Thames Valley Police are with all those who have been affected.

“Incidents of this nature are very rare, though I know that will be of little comfort to those involved and understand the concern that this incident will have caused amongst our local community.

“We will be working closely with our partners over the coming days and weeks to support the Reading community during this time, as well as with CTPSE (Counter Terrorism Policing South East) as they progress their investigation.

“Police cordons continue to be in place and are likely to be for some time as CTPSE work further to investigate this incident and establish exactly what happened.

“I would urge the public to avoid the area at this time and thank the community for their patience. We will let you know as soon as the area is back open.”

Boris Johnson has held a meeting with security officials, police and senior ministers over the incident.