“I think it’s my job to be suspicious of people with wealth and power,” says Alex Gibney. “It’s why we do what we do.”

The prolific documentary maker who dissected smoke-and-mirrors business in Enron: the Smartest Guys in the Room, who has confronted liars and tricksters from Lance Armstrong to Scientology’s guardians, has turned his gaze in Citizen K upon Mikhail Khodorkovsky, a former oligarch and owner of Russia’s massive oil business. 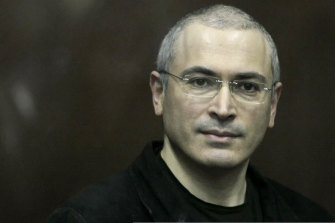 In Alex Gibney’s Citizen K, Mikhail Khodorkovsky looks on from behind a glass enclosure during his 2010 courtroom appearance in Moscow.Credit:

Khodorkovsky has had more wealth and power than most of us could even imagine. That was until his pro-democracy agitation landed him in a Siberian prison, then exile, at the behest of President Vladimir Putin.

For Russia’s dissident democrats, the former oligarch has become a hero.

Between 2003 and 2013, Khodorkovsky was in a Siberian prison on spurious charges of fraud and tax evasion. When he was released, the empire he had been building since 1989 had disappeared.

Nevertheless, he was able to lay his hands on around half a billion dollars he had squirrelled away before he was incarcerated – a fraction of the $US15 billon he once boasted, but quite sufficient to finance information campaigns in Moscow long-distance from London. “You don’t need to feel sorry for him,” says Gibney wryly.

For anyone familiar with Gibney’s style, Citizen K is exactly as you would expect: a close encounter with the subject supported by a thorough backstory, measured in the telling but with a clear point of view.

Khodorkovsky interested him, he says, because he had been “at the very top and the absolute bottom, exploiter and dissident, which seemed like a pretty interesting way to look at Russia”.

To look at Russia means, in turn, to look at the wily career of Putin. “In a way, the film is about the struggle between the two men,” Gibney says. It is cobra versus mongoose: a fight to the death that is still going on.

'Of course, the people I serve ultimately are the viewers.'

The earlier history of Khodorkovsky’s rise to riches is a rattling yarn of greed, gangster capitalism and occasional assassinations. Young Mikhail’s father was a design engineer at a state factory, his mother was a technician. Professionals though they were, they were poor.

When the communist system collapsed, the newly capitalist government gave everyone vouchers so they could start investing in the state-owned industries. But what did that mean? Shortages were rife and people desperate for money; soon, the baffling pieces of government paper were selling on the street for a fraction of their face value.

That was the entree for the future oligarchs. Canny Khodorovsky accumulated a wad of vouchers and used this paper to buy up slices of state-owned industries. Oil was his biggest interest. A sham auction a few years later delivered him the oil company Yukos at a peppercorn price, a pattern repeated in all key industries. By 1996, seven men between them owned half of the Russian economy.

It was only when he visited Russia and talked to people in the street, says Gibney, that he realised the depth of enduring hostility to Khodorkovsky, not only for his ill-gotten gains but also for his ruthlessness to those who stood in his way. 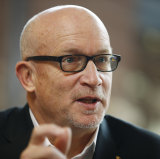 It is accepted as fact that he ordered the execution of a mayor who tried to stop Citizen K’s mass sacking of workers at the town’s oil refinery. “Whether it’s manufactured or it’s a hangover from the way people really felt, in much of the country he is a reviled figure,” says Gibney. He doesn’t try to whitewash that past, but is convinced Khodorkovsky has changed.

“Prison will do some strange things to you,” he says. “For some people, it might have led them down the path to self-pity – that’s usually what happens to powerful people, even when they’re still in power. Khodorkovsky was different.”

Prison didn’t break his spirit or fill him with a lust for revenge; instead, he seemed to find a sense of mission. “He comes out of prison saying life is not about having, it’s about being. It’s hard to imagine Trump or Putin saying that,” Gibney says.

“I do think there was a change in terms of thinking about what is important in this society, whether human rights are important, whether an independent rule of law is important. I do believe in that change.”

It is inevitable, says Gibney, that he grows close to his subjects. “Of course, the people I serve ultimately are the viewers. For that reason I must be critical – which is hard, because over time you develop a sense of trust or affection for the subject, but you also have to be willing to have a distance.”

Khodorkovsky was extremely reserved when they first met. He was also inclined towards abstraction. “The hard part is to get him to speak in concrete ways, but when he does it’s kind of remarkable. I asked him what he thought Putin’s greatest nightmare is. I thought it was a metaphorical question, but he answered with great vividness.”

We hear him ask the question; Khodorovsky answers with alacrity. Putin’s nightmare would have him walking the corridors of the Kremlin, aware all the telephones are turned off, that nobody is answering him, knowing that his nemesis is finally coming for him.

“That is a really interesting image,” says Gibney, “because everybody who has been in power for a long time is actually terrified of losing that power.”

Khodorkovsky, on the other hand, knows that dissident Russians in London tend to die before their time, but he refuses to give way to fear. He has already had his power stripped from him; let them do their worst. “I don’t value my life that much,” he says, “to exchange it for losing respect.”

Citizen K is now in cinemas.