Kandi Burruss laid down the law on The Real Housewives of Atlanta. The singer and actress intervened in the Kenya Moore and Nene Leakes feud to try to make them get over their issues. All her good intentions went to waste when both of her co-stars failed to really connect and make peace. There was even a moment went Burruss trumped their pettiness by remembering when she was accused of rape. 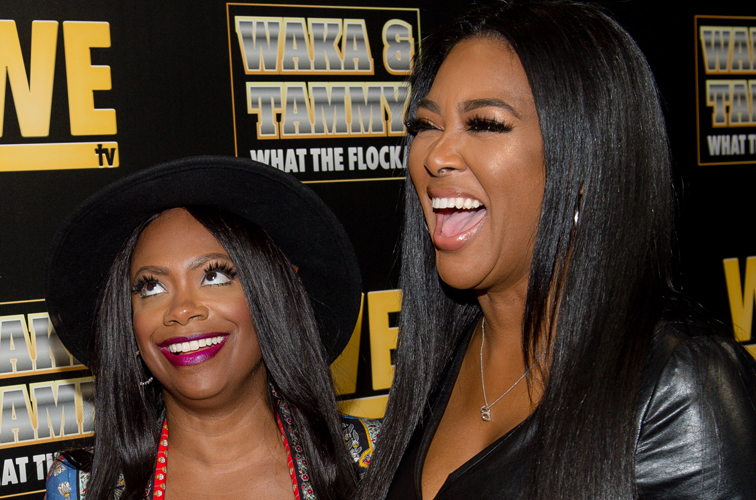 How did the drama start?

The RHOA ladies took a trip to Greece this year. On the day they departed, the whole cast found out that Moore had split from her husband Marc Daly. That drama was hanging over the getaway on top of Moore’s drama with Leakes.

To help make peace between Moore and Leakes, Cynthia Bailey tried to have both of them sit down to exchange words. The former model wanted Leakes to give Moore words of encouragement, as she has lived through a divorce before. Leakes was open to sitting down with Moore and even tried to connect with her on a number of occasions.

When Leakes had enough of Moore’s snubs, she completely shut down and Burruss tried to intervene.

The Kandi Factory owner tried to convince Leakes that it was all a misunderstanding. She wanted to calm Leakes down so she would be cool with having a conversation with Moore later on, but it was too late.

“She’s right, I’m wrong. I f***ed her man and stole her baby. So goodnight, honey,” Leakes said before walking away from Burruss and leaving her speechless. “Have a goodnight Kandi, we love you dearly darling. Keep it a thousand with your friend. Have a goodnight everyone. Thank you. I have to talk to my man, honey. I can keep my marriage together, honey.”

When the RHOA ladies tried to play a game to hash problems out, Moore finally told Leakes why she was upset at her. The former Miss USA said that Leakes called her baby a buffalo and the latter apologized and said she didn’t mean it to come across that way.

However, even after Leakes apologized, Moore continued to feud until Burruss put a stop to it.

“If we’re trying to have a conversation where we are trying to clear the air, [Leakes] can’t keep apologizing for the same thing,” Burruss told Moore. “If you said that’s the thing that made you so upset, are you going to accept the apology about Brooklyn or not? We shouldn’t have to keep going on about that point.”

SWIPE: Tune into #RHOA TONIGHT at 8pm only on @bravotv THEN catch me and @marlohampton on #WWHL at 10pm with @bravoandy

Leakes then told Moore: “I would never say anything where her child is concerned. When you beef, you start saying all kinds of stuff to each other. I didn’t even realize I had said that.”

When Marlo Hampton called out Moore for being “good at acting,” the latter had enough and walked away from the group. Although Burruss tried to knock sense into Moore, it was useless as she had already made her mind.

Kandi Burruss shuts it down

The following day, Bailey and Burruss sat down with Moore and they both made the latter aware Leakes was putting her best foot forward at first.

“I feel the first night we were here, Nene genuinely was trying to show you kindness,” Bailey said, while Moore replied, “I say that’s bullsh**.”

Kandi then said, “I get what you’re saying but if she’s going to sit there and give a speech about wanting to know how you were feeling.  Even this week, she was trying to have a conversation with you before she had a conversation with Porsha [Williams].”

Did y’all watch #RHOA tonight? I thought it was a great episode. What did y’all think? I’ll post my #SpeakOnIt tomorrow.

Moore was reluctant to talk to Leakes and work things out. That’s when Burruss shut it all down in saying that their issues were not that deep. She recalled the time Williams said that Burruss was trying to drug and rape her, a rumor that Phaedra Parks had told her.

“Everybody in this group has gotten over things way worse… nobody has ever accused you of rape. So if I can still be cool and have a conversation after that shit…,” Burruss said.

The Real Housewives of Atlanta airs Sunday nights at 8 p.m. ET on Bravo.