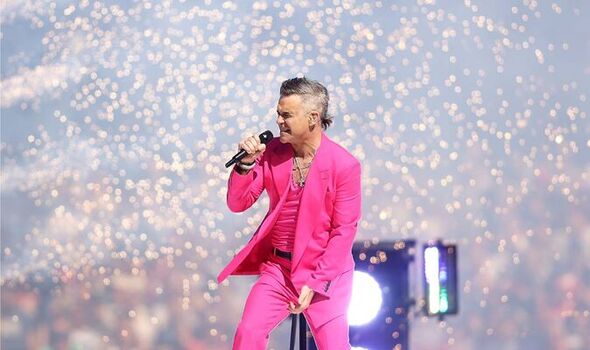 Robbie’s departure in July 1995 wasn’t entirely unexpected after his drunken antics earlier that summer at the Glastonbury Festival. These days anybody seems welcome at the iconic midsummer jamboree, but in the mid-nineties, it was still a bit precious an exclusive club. The last thing you would expect was a member of Take That in a state of advanced inebriation.

But there was Robbie sporting newly-dyed peroxide blond hair, a front tooth blackened out with marker pen, making a drunken spectacle of himself jumping on the stage where Oasis was performing and dancing the night away.

Take That songwriter Gary Barlow and the rest of the band were not impressed.

Robbie, it seemed, was threatening the reassuring cocoon that had bred their phenomenal success. He was simply becoming too dangerous for the band.

Robbie had made sure everyone knew that he wouldn’t be in Take That in two or three years’ time, but he had intended to stay at least until Christmas and fulfil existing tour dates. The others were clearly unhappy with him dictating when he was going to leave.

After lunch on the first day of rehearsals in July 1995 he was summoned. Jason Orange told him: “If you are going, go now so we can get on with it.”

The following day, his departure was front page news with the accepted line that “everything was entirely amicable” which, of course, it wasn’t.

Back home in Stoke on Trent, Staffs, his mum, who reacted well in a crisis, was already talking to lawyers, but effectively the star would be in limbo for a year while members of the legal profession got richer sorting out the ramifications of what had happened. 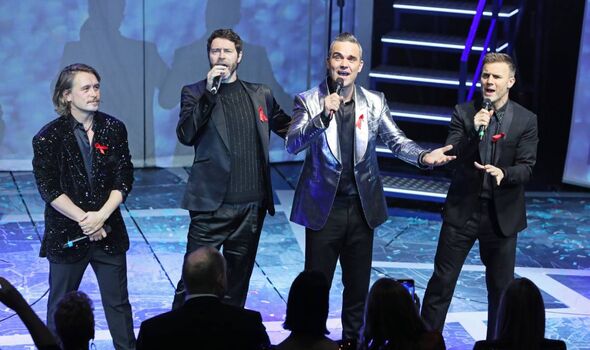 Nobody gave Robbie much chance of being the most successful solo member of Take That.

Everyone assumed it was going to ed be Gary Barlow, who the group had been built around and who had written the songs and sang lead vocal on most of them

But something unexpected happened when Robbie left the band. The sex appeal went with him.

The youngest female fans might fantasise about their favourite – usually cuddly Mark Owen – but it was never a heavy sexual thing. The older girls would, nine times out of ten, pick Robbie for a romp.

He was a bad boy, not a bland boy. Without him, Take That was very tame.

The boys themselves called it a day the following February, coincidentally on the day of their former bandmate’s 22nd birthday. At the press conference, Gary was asked: “Have you got a birthday message for Robbie? It’s his birthday today.” Gary replied: “Is it? Oh.”

The birthday boy himself had moved to London where he gained two stone on a diet of Guinness and kebabs – although sometimes he would forget the kebabs.

His party trick was lining up five pints of Guinness in a row and downing all of them. He reputedly once drank 25 pints of the black stuff in a single day. 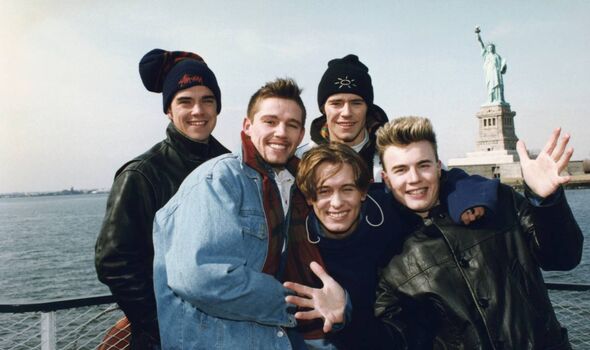 Robbie would turn up at the opening of an envelope and become known as the biggest “ligger” in town. And he was snorting enough cocaine to keep the Colombian economy afloat.

One record company executive recalled the 1996 vintage Robbie Williams: “He was just a fat schizo – a f****d up boy.”

The great British public, however, recognised something magnetic and appealingly different in Robbie’s personality – even during his “lost year”.

When he popped up interviewing celebrities on The Big Breakfast TV show, viewing figures soared by fig 600,000 a day while more than a thousand fans would gather outside the East End studio where the programme was filmed.

There was, it seemed, a chink of light in the dark tunnel that Robbie found himself in.

He loved the unexpected attention, playing to the crowd, shaking hands, planting kisses and signing autographs. Perhaps he was still a star, after all.

His celebrity girlfriend at the time, socialite and scion of aristocracy Jacqui Hamilton-Smith, did her best to persuade him to get treatment for his problems.

Elton John, too, a man who had struggled for many years with addiction, was willing to help as he had done and would continue to do with many vulnerable stars. 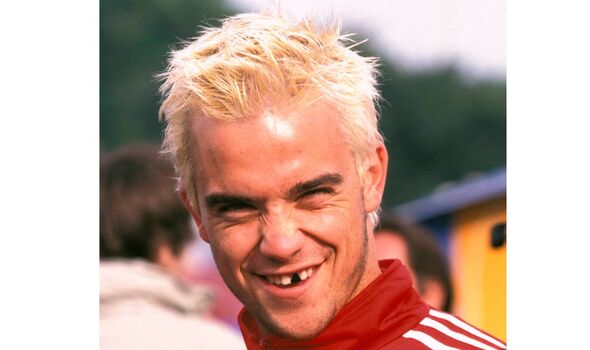 Robbie was persuaded to take some therapy sessions. It was a start, of sorts.

What he needed most of all, however, was Team Robbie – a group of people to help him build a new identity as a proper solo star and not just a mediocre ex-boy band member.

He got lucky. A knight in shining armour arrived to rescue him from limbo in the shape of a hugely successful maverick executive at record company EMI/Chrysalis called Jean-Francois Cécillon, known throughout the record business as JF.

He saw something in Robbie and fought for him – as did the record company A&R scout Chris Briggs who observed sensitively: “There’s a difference between a prat acting like a rock star and a talented, sensitive person going into meltdown.”

Robbie, as his real friends know, can be extremely sensitive and vulnerable.

EMI handed him a £1million contract to make three albums.

It was a huge gamble but at last, Robbie was on his way. Until now, his very enthusiastic embrace of sex, drugs and rock’n’roll had been missing one vital ingredient – the actual rock’n’roll. 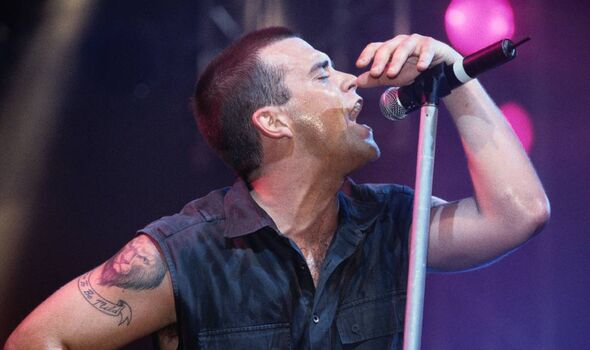 He also added another important element to Team Robbie – new management. Tim Clark and David Enthoven would skilfully move their new client to the centre of British music.

When they first met Robbie, Enthoven remarked poignantly that he resembled a horse that had been abused to the extent that he had lost faith in himself and others.

Enthoven, a witty and urbane old Harrovian, tried to show Robbie that there was a better place, free from hangers-on who just wanted to be his friend because of what they would get out of it.

Enthoven had faced his own demons in the mid-Eighties during spells in rehab and was not judgemental, never blaming Robbie for temporary relapses.

One of the first tasks of his new team was to add a musical collaborator.

Robbie met Guy Chambers, who had been a member of the short-lived Nineties band The Lemon Trees, at the Capital Radio RoadShow.

That day, Robbie had the shakes, was still overweight and looked like death warmed up. It wasn’t a promising start but the two gelled. Chalmers heeded the advice of David Enthoven not to call him Robbie and not to try to be his friend. “Robbie” Williams had been a Take That invention.

In the real world he had always been Rob. The last piece of the Robbie Williams jigsaw brought Steve Power, a friend of Guy’s, into the mix as co-producer.

Where Guy arranged, Steve mixed. Together the three men set about recording Robbie’s first album Life Thru A Lens.

Robbie famously spent most of the time lying underneath the mixing desk sipping cans of Guinness.

Eventually, in June 1997, two years after the Take That trauma, Robbie checked himself into the Clouds House rehabilitation clinic in rural Wiltshire.

It was not a spa break but a serious six weeks during which he was introduced to the “programme” to help him day to day with managing his addictions. It was not a cure but a respite.

The album was released in September 1997 and made a disappointing start, selling just 33,000 copies in the first week, less than a tenth of the sales racked up by Gary Barlow’s own solo record, Open Road.

Twas an open secret in industry circles that his record company was considering dropping him. But then at EMI’s 1997 autumn sales conference, Robbie pulled himself together and sang a couple of the album’s tracks for a disinterested media.

And then he sang Angels. A former executive recalled the moment: “We were about to drop him. But everyone was saying ‘Oh My God! Angels is such a hit’.” 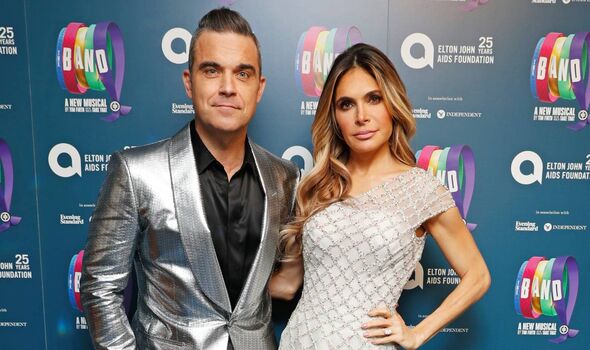 If ever one song transformed a career, then Angels did it for Robbie Williams. It’s an uplifting song about guardian spirits and personal rescue and, as such, rather aptly rescued Robbie’s career. The famous video revealed a grown-up Robbie, strong-featured yet vulnerable with a new close-cropped haircut and a shaved parting.

He walked wistfully along a beach wearing an impossibly big overcoat.

Angels never made number one but sold more than a million records and was voted Best Single of the last 25 years at the 2005 Brit Awards. That was just one of a record 18 Brit Awards he has won including Global Icon in 2018 – not half bad for a “fat schizo”.

It would become a staple at funerals, bringing mourners to tears.

Life Thru A Lens re-entered the chart and went to number one, subsequently selling more than two million copies. Five years after its release, Robbie signed a new contract with EMI worth a reported £80million.

With his new compilation album XXV – released to mark a quarter of a century at the top of the pop tree – having become his 14th number one last week, he beat Elvis Presley’s record of 13 number one albums as a solo artist.

Truly he’s the one!