Call it the “Ascham army” – the alumni network of one of Sydney’s most prestigious and expensive schools, ready to go in to bat for one of their own, former head girl Allegra Spender, as she takes on Liberal MP Dave Sharma for the seat of Wentworth.

Only problem is, not everybody’s happy about it. Especially as Sharma has one daughter – and until very recently, two – at the school. 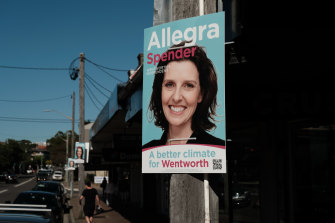 A March 13 article on the school’s website, written by Ascham Old Girls committee member Holly Marsh and titled “Allegra fights for a better climate”, rallied the troops behind the class of 1995’s head girl.

“Allegra believes that in the world of politics she can be kind, gentle, formidable and strong,” Marsh wrote in a gushing endorsement. “She is not aggressive, just resolute.”

But after more than a month online, the article mysteriously disappeared this week. It happened to be the same week the area’s former Liberal state MP, Michael Yabsley, contacted the Herald and The Age to draw attention to it.

“When I saw that, I thought ‘no, this can’t be real. No school would allow that to happen’,” Yabsley said.

“It’s inappropriate. Dave Sharma’s daughters go there. We’re always told there’s only one thing that matters in a school and that’s the welfare of the students. Well, the welfare of the Sharma girls went out the window with the publication of that. It’s got ‘wrong’ written all over it.”

Yabsley said he had spoken to people directly involved with the school, and they were “appalled”.

“This is going to light a fuse in the loftiest suburbs of Sydney’s east,” he said. “It’s not that a school can’t lay claim to someone who has created a political career for themselves. But I think the correct judgment is you wait until someone has been elected, or at least you do not promote them during an election campaign.”

Ascham alumnus Skye Leckie, who is also a Liberal and a Sharma supporter, agreed. “I think it’s outrageous to use a school as a platform for politics,” she told the Herald. 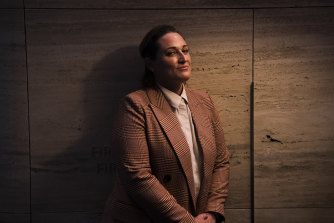 Ascham School was contacted for comment on Friday afternoon, but did not respond before deadline. Neither Sharma nor Spender wanted to comment. Ascham board member Stephen Garton said he was unaware of the matter.

On the other side of the ledger, some Ascham alumni think they should be doing even more to get their old girl elected. Some suggested a boys’ school would be going all-out to help their guy win.

Lauren Miller, who was in Spender’s class of ’95, says she cried at her head girl’s campaign launch at the Paddington RSL last year.

“Everyone should do more,” says Miller. “She absolutely has the support of an army of Ascham old girls. They’re showing up for her. I can see my connections mobilising.”

Miller, the daughter of late celebrity agent Harry M Miller, is now chief executive of his agency HMMG. She says the Spender campaign picking up a public endorsement from legendary former Ascham principal Rowena Danziger was “a masterstroke”, as “she would not do that lightly”.

Danziger ran Ascham for 31 years until 2003, educating thousands of daughters from Sydney’s eastern suburbs and beyond. The electorate of Wentworth “will be safe” in Spender’s hands, she assured voters in a video published by Spender’s campaign this week.

Danziger said while she wouldn’t comment on school matters she “hadn’t heard any whisper of real conflict”.

Holly Marsh, the article’s author, said it was not meant to be political. “We’d never go there,” she said. The piece was included in the April old girls’ newsletter, among stories about other “change makers and ground-breakers”. 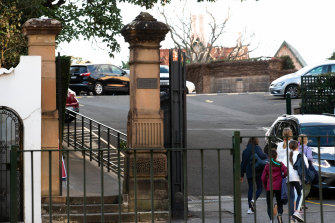 “If there are any [other] Ascham girls who run for federal politics we will definitely profile them,” Marsh said. She was not aware the article had been removed from the school’s website but said she would not investigate further. “I’ve got far bigger fish to fry,” she said.

Gabi Stricker-Phelps, the adopted daughter of former independent Wentworth MP Kerryn Phelps and her wife Jackie, graduated from Ascham in 2017. She said it was important the school did not “become an echo chamber”.

“If it is anything like the day I was there, it’s very inclusive of a diversity of views,” she said.

“The one thing I know about Ascham girls … is we’re taught how to think critically. Despite the fuss over whether the old girls are contributing or not contributing to Allegra or Dave or whoever, the best thing is we’re a mixed bunch.”

Stricker-Phelps said she doubted the election would be a hot topic at her five-year reunion, which is being held at Hotel Bondi in a couple of weeks.

“But you never know,” she said. “We’re spoilt for choice in this electorate. Isn’t it wonderful that the Ascham community is right in the centre of it? We’ve seen [Sydney] Grammar for so long being the home of the prime ministers and the home of the leaders. But Ascham’s coming up!”

Cut through the noise of the federal election campaign with news, views and expert analysis from Jacqueline Maley. Sign up to our Australia Votes 2022 newsletter here.