Nationals senator Samantha McMahon was encouraged to leave the upper house on Tuesday evening after several colleagues raised concerns that she appeared to be disoriented, struggling to walk, barely awake and was battling to sit upright in her seat.

The Northern Territory veterinarian, who faces a preselection battle for the number one spot on the Country Liberal Party ticket on Saturday, was a key supporter of Barnaby Joyce in his ousting of Michael McCormack this week to return as Nationals leader. 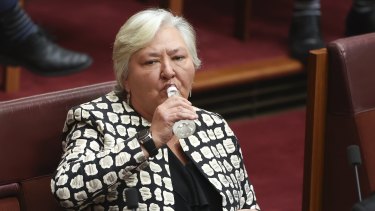 Nationals senator Sam McMahon takes a sip of water during a division in the Senate on Wednesday morning.Credit:Alex Ellinghausen

More than 10 senators – from different political persuasions– have confirmed Senator McMahon appeared to be “heavily” under the influence of alcohol while on the floor of the Senate.

Senator McMahon said it was “incorrect” she had been adversely affected by alcohol, saying she’d had only one glass of wine with dinner and had been overwhelmed during the evening after received “sad personal news”. She said she had asked to leave the chamber because she was not coping.

While she did not miss any late-night votes, several colleagues said she had to be “propped up” in her chair on several occasions and they were worried she was at risk of falling over while crossing the floor to vote.

Speaking on the condition of anonymity, senators from across the aisle all confirmed Senator McMahon appeared “trolleyed”, “off her head”, “embarrassing” and “maggoted”.

“It was totally inappropriate,” one senator said. “This is a place of work, we all have a social drink from time to time but this was on another level.”

Another said the senator appeared to walk into a door as she attempted to enter the chamber earlier in the evening.

The incident coincides with several workplace culture reviews within Parliament House following allegations of bullying, sexual harassment and sexual assault in the building.

Around 10.45pm, Senator McMahon appears in the footage to be supported by Nationals Senate leader Bridget McKenzie and Attorney-General Michaelia Cash. The pair watched her stand up and slowly cross the floor of the chamber for another division.

Senator Cash then encourages her to sit down on the other side of the chamber and continues talking to her.

Following the counting of another vote, government whip Dean Smith is seen talking and gesturing to Nationals whip Perin Davey, who then approached Senator McMahon.

She is then helped from her seat by Senator Davey and Senator Cash, appearing to hold their hand while she attempts to stand up from her seat. After a short period of pointing towards the door, Senator McMahon stumbles towards the exit, bows to the Senate President and leaves.

She was then granted a pair for the rest of the evening.

Senator Smith did not return calls and Senator Davey said she would not comment about the incident.

“We all thought she wasn’t going to make it that far,” one Coalition colleague said. “I’ve never seen anything like it.”

Another senator said Senator McKenzie, whose behaviour during the same period was described as “quite raucous”, then intervened to manage the situation.

Senator McMahon was among the Nationals MPs who voted to install Mr Joyce this week, telling The NT News said she has “a very close relationship” with the new Deputy Prime Minister.

Her future in Federal Parliament played a key role in the party room turning against Mr McCormack, because he was perceived to have not shown enough support for her in the preselection battle.

Alice Springs deputy mayor Jacinta Price and Tim Dixon, chief of staff to NT Opposition Leader Lia Finocchiaro, are among the candidates who are contesting the preselection.

CLP senators and MPs can choose to sit within the Liberals or the Nationals party room, with the Nationals concerned the party room could shrink and they could lose a ministerial quota if Senator McMahon wasn’t returned.

Victorian senator Sarah Henderson and fellow Liberal MP Katie Allen said in March they “would be up for” breath-testing for alcohol and drugs in Parliament, saying the building should have “the highest possible standards” and it currently had “outdated procedures and policies”.

In 2003, Andrew Bartlett resigned as Australian Democrats leader after a late-night fracas with Liberal senator Jeannie Ferris that left her nursing an injured arm.

Senator Bartlett “mauled” Senator Ferris and hurled abuse at her following a dispute over bottles of wine she said he took from a Christmas party.

Senator Ferris said the Democrats leader was annoyed with her for earlier demanding that he return five bottles of wine he had taken from a Liberal Party Christmas barbecue.

Later that night when the senators passed each other on the floor of the Senate following a division, Senator Bartlett shook her by the shoulder and called her a “f—ing bitch”.