A Liberal senator’s searing claim that Scott Morrison is “not fit to be prime minister” has set off a political firestorm after senior cabinet ministers dismissed the attack while some Liberals confirmed the growing anger at the way the Prime Minister was seeking to select candidates for the coming election.

Concetta Fierravanti-Wells doubled down last night on her caustic denunciation of Mr Morrison by rejecting claims from her Liberal rivals that she only made her remarks out of bitterness at losing a party ballot to keep her place in the upper house. 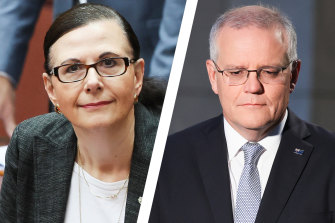 Concetta Fierravanti-Wells doubled down on her caustic denunciation of Scott Morrison. Credit:Alex Ellinghausen

Senator Fierravanti-Wells also ramped up her calls for action on her concerns by saying the Prime Minister’s close ally, Immigration Minister Alex Hawke, had questions to answer over moves that deprived party members of their rights.

“I have raised concerns about the lack of democratic processes in the NSW division through correspondence to the party membership in recent months, including the obstructive conduct of Alex Hawke,” she told The Sydney Morning Herald and The Age.

“I have been honest and forthright on a range of difficult subjects including commenting on major policy issues that I have placed on the record.”

A dispute over the running of the party’s NSW division is set to go to the state’s Court of Appeal on Friday with members aligned with Senator Fierravanti-Wells, a senior figure in the conservative wing, challenging plans by Mr Morrison and Mr Hawke to choose candidates.

Party member Matthew Camenzuli is taking the action with support from others in a bid to force Mr Morrison and Mr Hawke to back down and accept open ballots by party members in preselections to choose who stands for the party in key seats within weeks.

Senator Fierravanti-Wells stunned observers in the Senate on Tuesday night by condemning Mr Morrison for being a “bully” to others, making “racial comments” to hurt a rival candidate and being so “ruthless” he should not be prime minister.

One Nation leader Pauline Hanson backed Senator Fierravanti-Wells on Wednesday by saying she had given much to the Parliament and Mr Morrison had “blackmailed” people on the issue of vaccination.

“This is not a Prime Minister for the people. He is a bully! And I back the senator up completely with that. He is a bully because I have experienced it myself. He’s a man where you do it my way or there’s no way, and it’s a shame,” Senator Hanson said.

Senator Fierravanti-Wells’ remarks were made under the protection of parliamentary privilege less than two hours after the federal budget was released, throwing a political grenade into the government’s media blitz on Wednesday to tell voters about the budget.

In a key claim, which the Prime Minister denies, she said Mr Morrison had blocked his rival Michael Towke from becoming the confirmed Liberal candidate for the seat of Cook at the 2007 election even though Mr Towke, a Christian from a Lebanese family, had won a ballot against Mr Morrison to gain the position.

“He is adept at running with the foxes and hunting with the hounds, lacking a moral compass and having no conscience,” she told the Senate.

“His actions conflict with his portrayal as a man of faith. He has used his so-called faith as a marketing advantage.

“Morrison might profess to be Christian, but there was nothing Christian about what was done to Michael Towke.

“I am advised that there are several statutory declarations to attest to racial comments made by Morrison at the time that we can’t have a Lebanese person in Cook.”

After a long tussle over the ballot and intervention to settle the differences, Mr Morrison gained the party endorsement to run for Cook in 2007 and has represented the seat, which includes Cronulla to the south of Sydney, ever since.

Mr Towke did not respond to a request for comment. Mr Hawke’s press secretary said he would not comment.

Treasurer Josh Frydenberg rejected the assessment of Mr Morrison and said the Prime Minister had led Australia well during a challenging time in the pandemic. 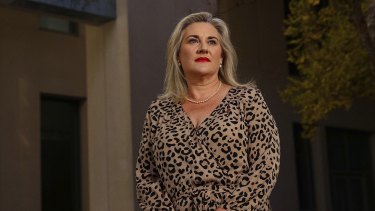 Senator Hollie Hughes says if she hadn’t stood aside for Senator Fierravanti-Wells, she would have lost her Senate seat six years ago.Credit:Dominic Lorrimer

“I think as most people who go out of this place and do so with dignity, they should be very grateful to the Liberal Party for the career that they’ve had for the opportunities they had.”

Senator Hughes said she had been in line for preselection for the upper house six years ago but Mr Morrison had spoken to her to allow Senator Fierravanti-Wells to take the position.

“And for the good of the party, with Scott’s intervention, I stood aside from that preselection victory and allowed Connie, who was then a minister under the Turnbull government, another six-year term in Parliament,” she said.

“Had I not stood aside, and without Scott’s intervention, Senator Fierravanti-Wells would have left the Senate six years ago.”

Mr Morrison also blamed the attack on him on the events at a Liberal preselection last Saturday when Senator Fierravanti-Wells came third in a race with Senator Jim Molan and Foreign Minister Marise Payne for positions on the NSW Senate ticket at the coming election, relegating her to a position that is seen as unwinnable.

“But in politics, on occasion, people have disappointments.

“I obviously don’t agree with her assessments but if she has any formal complaints, in the Liberal Party we have processes to deal with that.”

Jacqueline Maley cuts through the noise of the federal election campaign with news, views and expert analysis. Sign up to our Australia Votes 2022 newsletter here.