A 15-stone singleton got the last laugh on a man who rejected her on her birthday for being ‘bigger than he would go for’ by losing five stone for a ‘revenge body’ – only for him to try to come crawling back.

Lori Ball, 24, from St Asaph in Denbighshire, Wales, who had been single for four years, was thrilled when she bagged herself a first date and planned to meet up with the beau for a second time on her birthday six days later.

However, her date cancelled their next meetup just hours before they were due to see each other for a meal – claiming he had had second thoughts due to her weight.

Weighing 15st 12lb and wearing size 16 clothes, Lori was devastated and immediately decided to lose weight by getting more active and eating in a calorie deficit – losing five stone in just six months.

She then found new love and met her current boyfriend Sam Roberts in August 2018 – just two months after dropping down to her svelte goal weight of 10st 8lb and fitting in size 10 clothes. 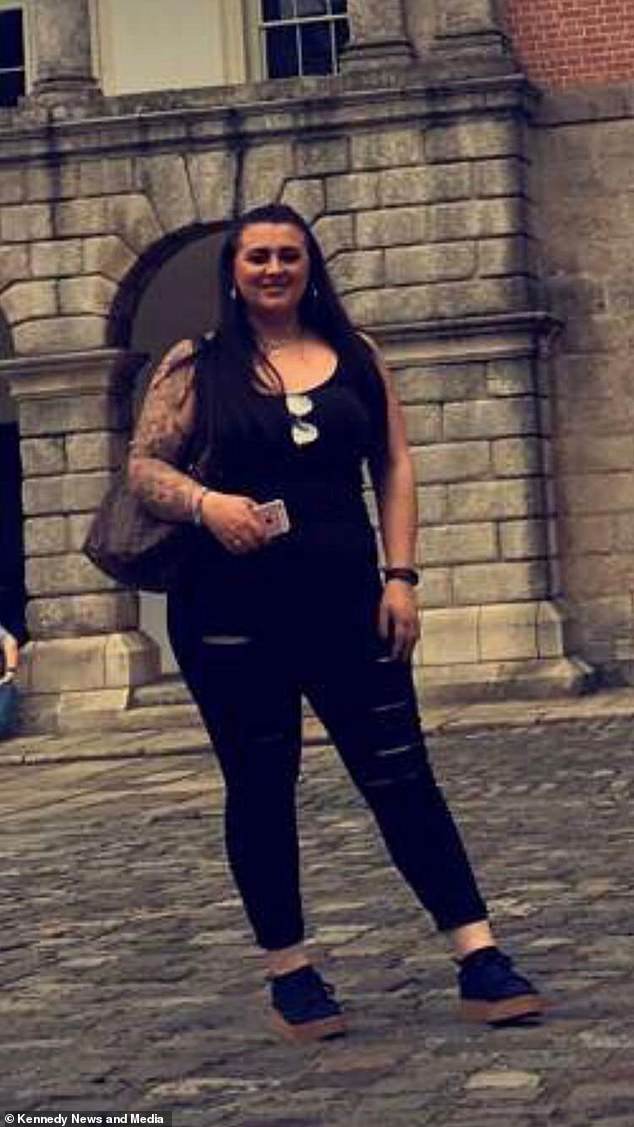 Lori Ball, 24, from St Asaph in Denbighshire, Wales, got the last laugh on a man who rejected her on her birthday for being ‘bigger than he would go for’ by losing five stone for a ‘revenge body.’ Pictured, at her heaviest weight, 15st 12lb 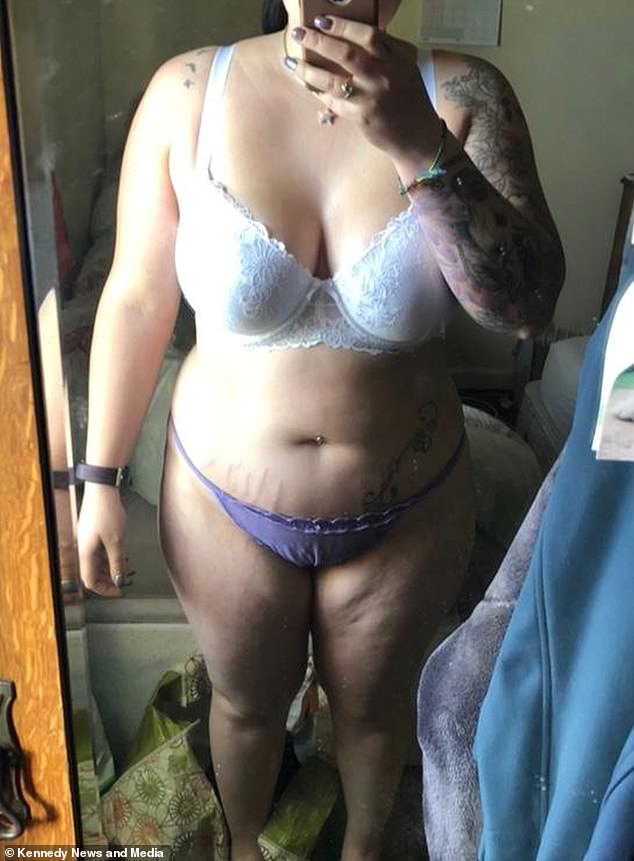 Lori loved to gorge on calorie-dense takeaways and even snacked on packets of crackers and spreadable cheese. Pictured, at her heaviest weight 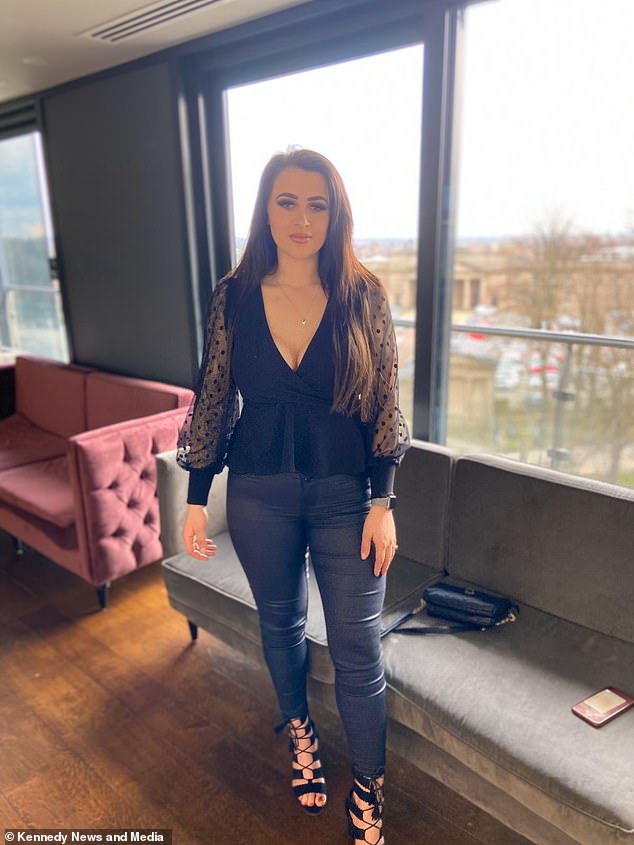 Lori had been single for four years when she bagged herself a first date and planned to meet up with the beau for a second time on her birthday six days later. Pictured, after her impressive weight loss

And Lori had the last laugh when the hopeful contacted her months later to ask if she was still single but she ignored his message – and finds it amusing to see that the bitter bloke still watches all her Instagram stories.

‘I’d been unhappy,’ she explained. ‘I’d put it on over the space of two years. ‘I’d been unhappy for a long time and tried to lose it but just couldn’t stick to anything because I love food. My mum eats to survive, whereas I live to eat. I love going out to eat.

‘I was single for about four years and I tried online dating and went on a date. We went out, had a nice time, arranged to go out again on my birthday but he went really cold on me.

‘He messaged me that day after we had booked to go out for my birthday, saying, “I’m really sorry to do this, but I don’t want to see you again because you are bigger than what I would go for.”‘ 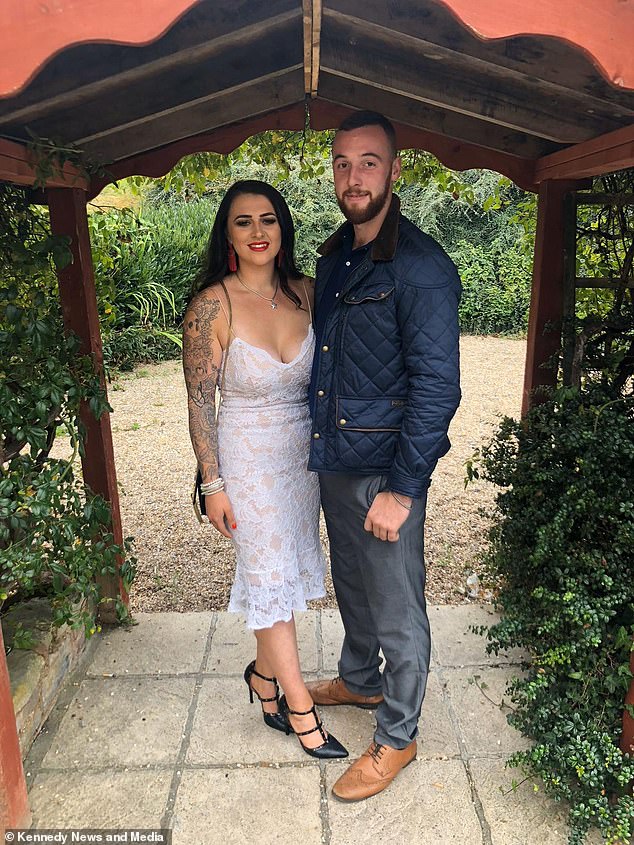 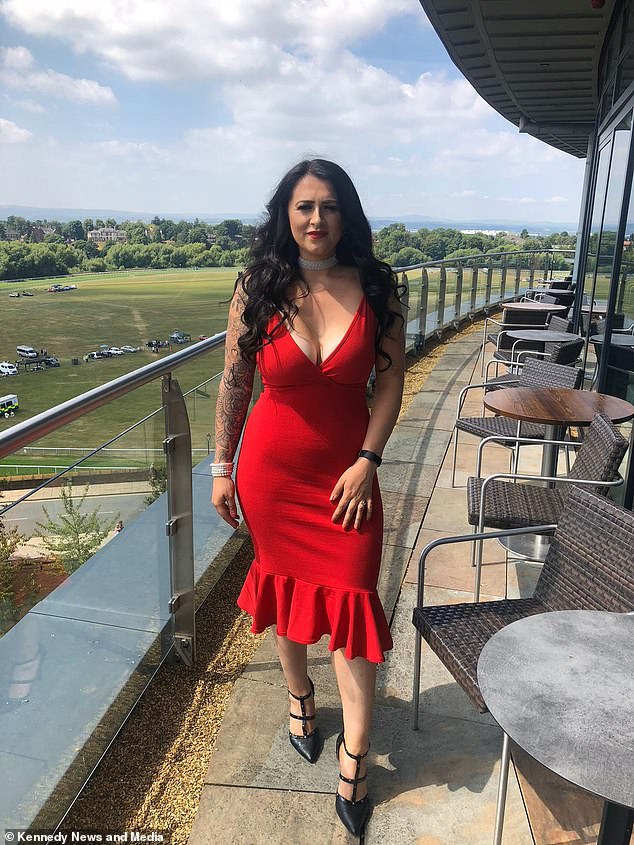 Weighing 15st 12lb and wearing size 16 clothes, Lori immediately decided to lose weight by getting more active and eating in a calorie deficit. Pictured, with her svelte new figure 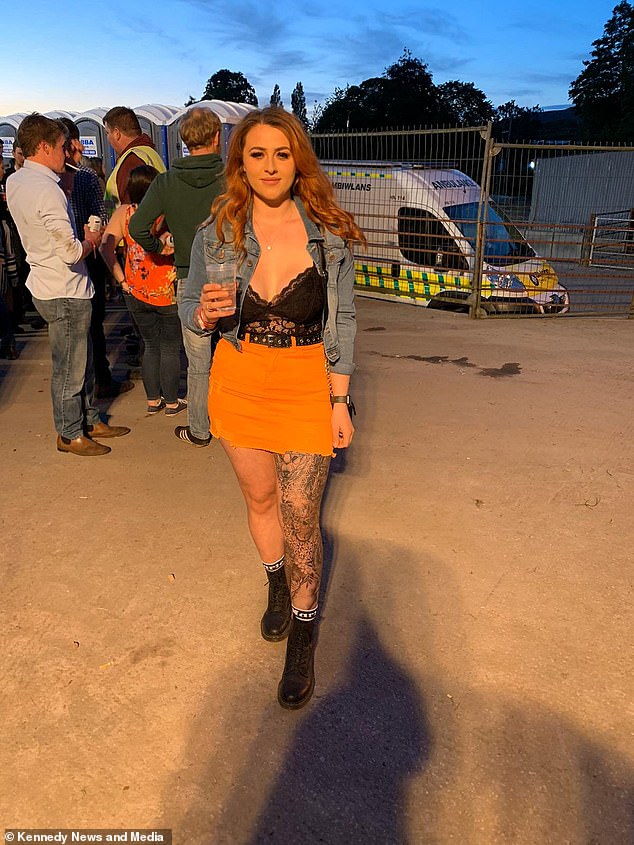 The super slimmer said she had the last laugh when the date who rejected her contacted her months later to ask if she was still single but she ignored his message. Pictured, after her weight loss

‘It cut me deep. It really cut me deep. I don’t hold it against him because he was honest. I thank him for it now because that was when I decided to make a change.

‘And I did. That gave me a real kick-start to be honest. I’m grateful to him now.

‘He messaged me a couple of months later saying something along the lines of, “hi, how are you doing, you look really well. Are you still single?.”‘

‘I never replied to him. I didn’t bother. He still follows me on Instagram and watches my story. Oh dear.

‘I’ve been in a relationship for nearly two years. I met my partner in August 2018. I didn’t want to try again until I was ready and I didn’t go back on online dating or anything.

Dinner: Healthy takeaway style meals such as stews or casseroles

Exercise: 15,000 steps daily, plus exercise at least five or six times a week

‘I just happened to meet him at the Royal Welsh Show. It just went from there. I’d already lost my weight by them.

‘He’s not very sympathetic, my boyfriend. He’s a cutthroat farmer boyfriend but he does know about what happened to make me lose weight.’

Lori claims the pounds easily piled on over two years as she ‘lived to eat’ – loving to gorge on calorie-dense takeaways and even snacking on packets of crackers and spreadable cheese.

But she says she approached her weight loss as a ‘lifestyle transformation’ rather than a diet and refused to swap out her favourite foods such as Creme Eggs – instead making room for them in a strict calorie limit.

Lori quickly started getting active and managed to lose a staggering five stone in just six months. Pictured, at the gym 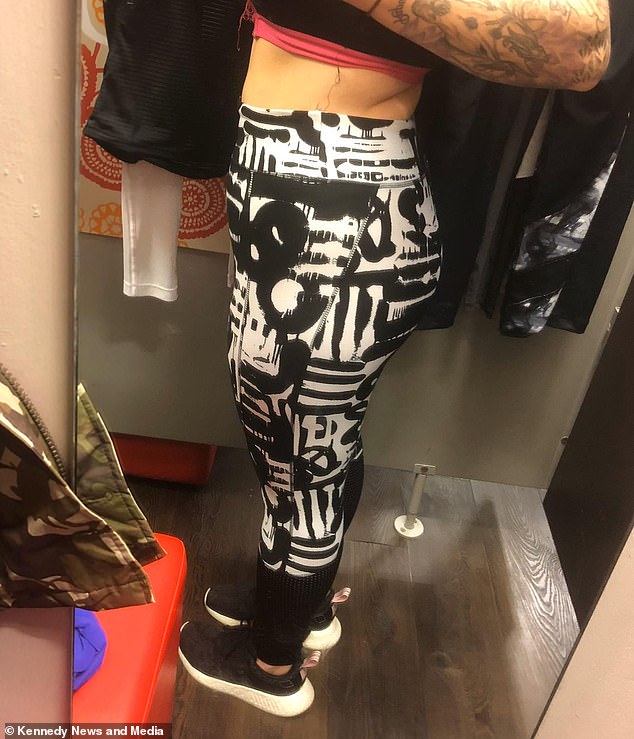 After joining a Slimming World group with a pal for inspiration in January 2018, she started recreating her favourite takeaway meals at home with healthy twists to reduce their calorie content.

She was also spurred on to work out up to six days a week and hired a personal trainer to teach her workouts that would help her tone her body.

After changing jobs, Lori was thrilled when she saw her daily footsteps shoot up from 3,000 to more than 15,000 every day, and the weight dropped off by June 2018.

She had previously avoided photographs as much as possible, but was thrilled when people noticed her transformation and complimented her on her weight loss.

Now, the gym buff has been maintaining her weight ever since by eating 1,900 calories on training days, and 400 calories less on rest days.

‘It’s nice when people start noticing,’ said Lori, who works as an insulation consultant. ‘It helped with my confidence massively and spurred me to keep going.

‘It felt like it got to the point before where every time I was talking to someone or if I had seen someone I hadn’t seen in a while, all they were thinking was “how much weight has she put on” or “how big is she.”‘ 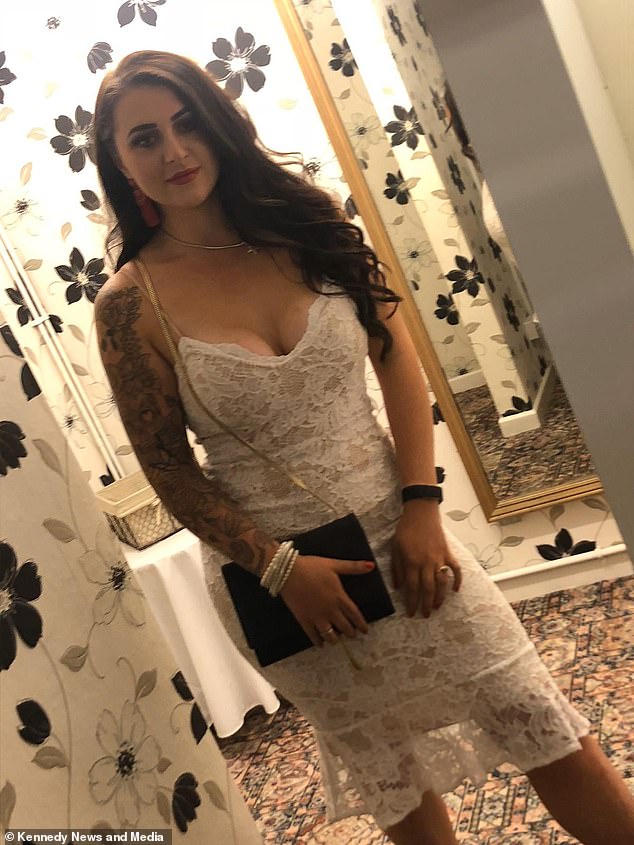 Lori claims she approached her weight loss as a ‘lifestyle transformation’ rather than a diet and refused to swap out her favourite foods. Pictured, with her new svelte figure

Lori finds it amusing that the bitter man who rejected her for a second date still watches all her Instagram stories. Pictured, after her impressive weight loss 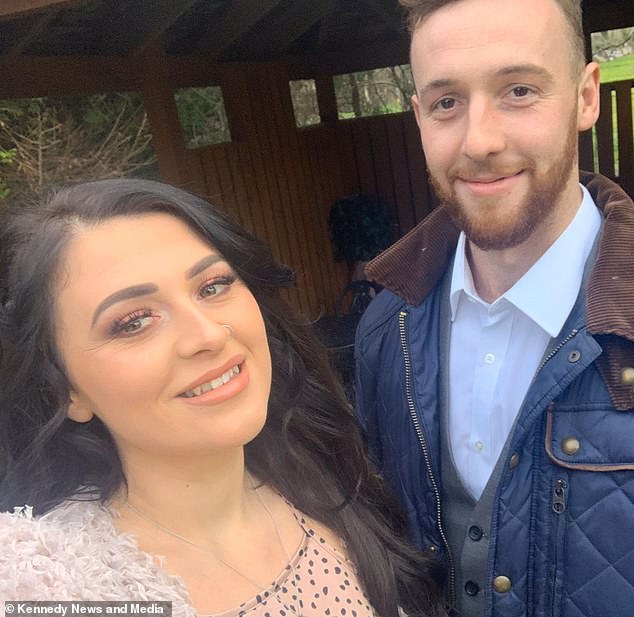 Lori, pictured with her new boyfriend Sam, said the comment about her weight ‘cut her deep, but added she doesn’t hold it against him

‘That type of thing was going through my head all the time. People do a lot of crash diets and stuff I didn’t do it. I was never hungry.

She continued: ‘I was never deprived of anything. I didn’t cut out the things I wanted which I think is a big mistake that people make. I don’t see it as a diet, I see it as I totally changed my lifestyle.

‘I went to a Slimming World group with a friend of mine. I only did a very short term but it helped me to get a better relationship with food.

‘Obviously it’s about portion control and eating more healthy stuff. I did it for probably around three weeks and then I did it on a more calorie counting basis.

‘I lost a couple of pounds in the first couple of weeks and then people started to notice and that spurred me on to carry on.

‘The first couple of weeks I had no clue what I was doing exercise-wise, so I decided to get a personal trainer. I signed up with one, and I was with him for probably about six to eight months. 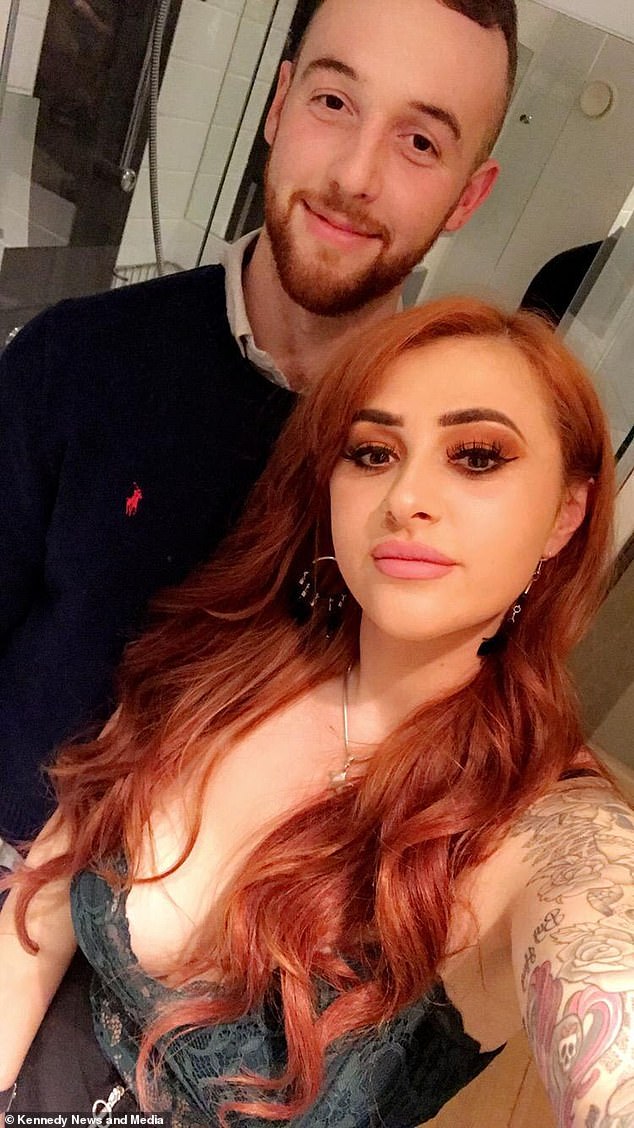 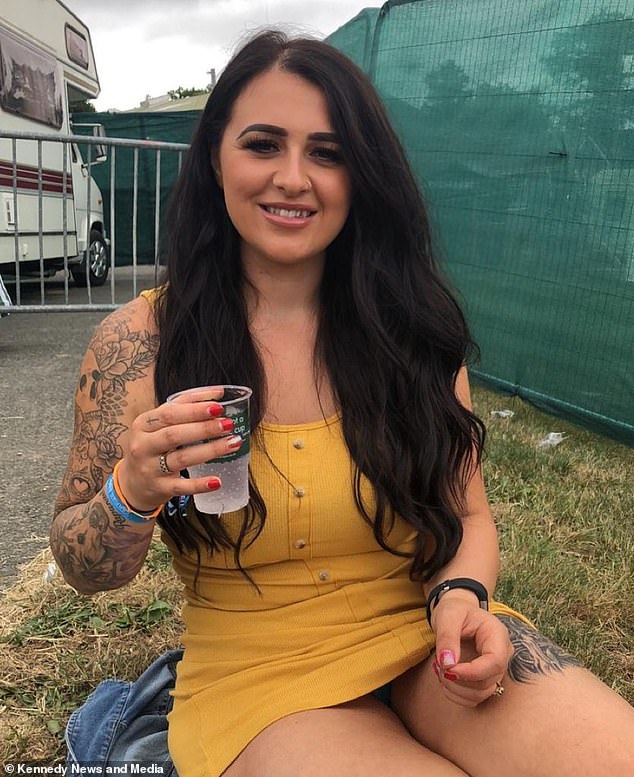 ‘I said to him I didn’t want help with my diet because I was quite happy with what I was doing. I just wanted him to help me with the training side of things.

‘I drastically reduced the takeaways I was eating. Before, when I was making pasta I wouldn’t weigh it, whereas now I weigh the amount of pasta that I have.

‘Even now, if I was a Creme Egg I will have it, but I’ll log it and make sure I don’t go over the calories for the day. If I go over on that I might reduce the amount of pasta I have for my tea.

‘It’s just being more mindful of what you’re actually putting in your mouth.

‘The other night I really wanted a Five Guys so I went online and totalled up the calories of what I wanted to have from there, and it was about 1,900 calories. That’s over my daily intake.

‘It’s amazing looking back now. But [losing weight] is really not easy. It’s so easy to put it on but it’s not easy to take it off.

‘It takes a lot of determination, especially when you love food. I didn’t give anything up, which I think helped me.’ 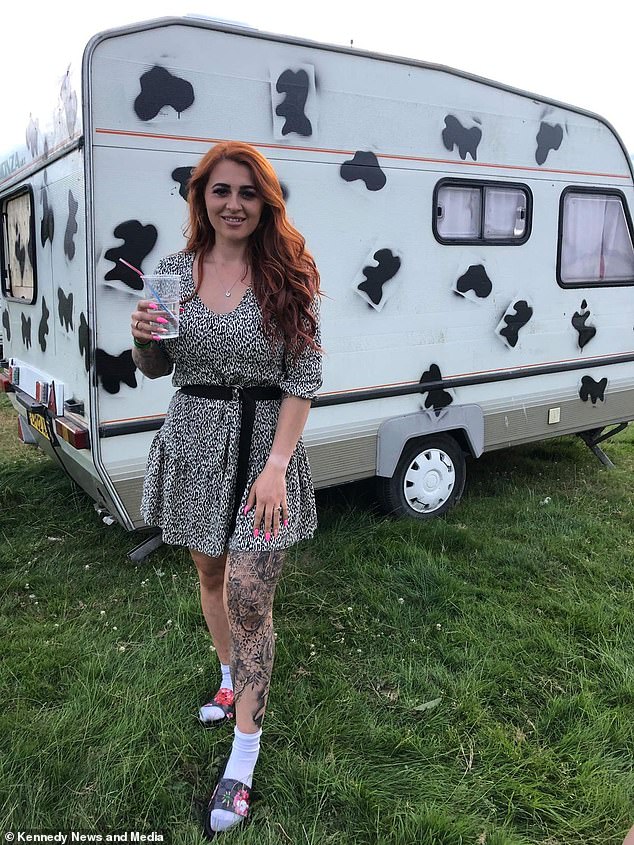 The super slimmer (pictured, recently) said that if she wants a treat, she will have it, but will log it to make sure she doesn’t go over the calories for the day 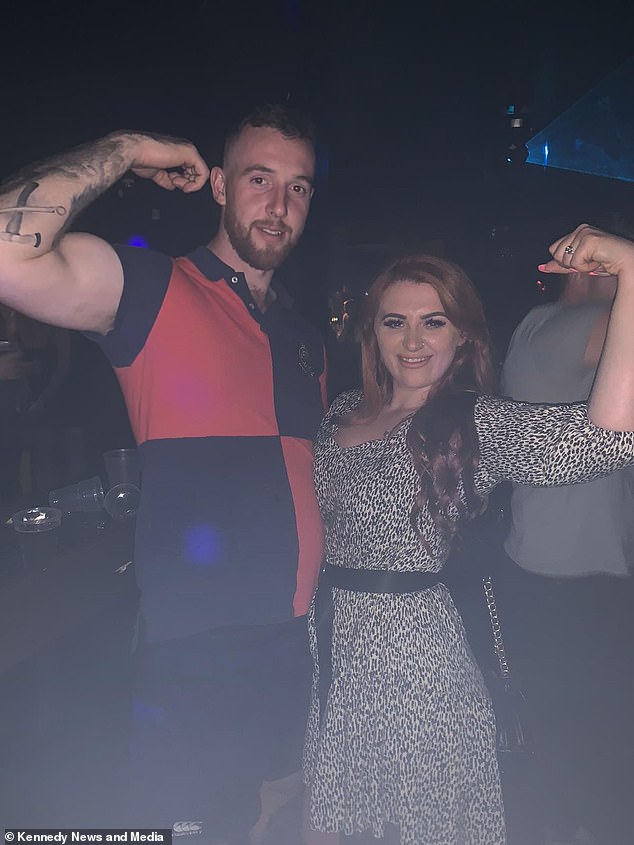 Lori added her weight loss journey took a lot of determination, especially because she loves food. Pictured with her boyfriend, Sam