Art is a fickle mistress. Composer and lyricist Jason Robert Brown expertly crafted his musical The Last Five Years, and then a decade later churned out this. So much for the upward-trajectory theory. Robert James Waller's novel of the same name was already clammy with mawkish sentimentality, the writer just managing to leaven it with sufficient genuine poignancy and a lacing of soft-focus erotica. The musical opens the floodgates of slush. 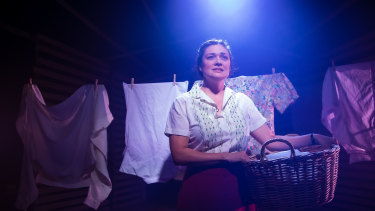 Kate Maree Hoolihan’s voice springs to life with What Do You Call a Man Like That?Credit:Grant Leslie

It's not so much a fault of Neil Gooding's production, and certainly not the fault of Marsha Norman, whose convincing dialogue makes one suspect the stage show, like the film, would have been happier with no songs. But then presumably Norman was complicit in deciding to turn what may well have prospered as a two-hander into a show with a cast of 10, and in the bizarre choice to dramatise so much action peripheral to the main plot.

This tells of Francesca (Kate Maree Hoolihan), a bored housewife stuck on a farm in Iowa, who's approached by Robert (Ian Stenlake) a lost photographer looking for directions to a covered bridge. With Francesca's husband and children off at an agricultural fair for a four days, the two find themselves powerless to resist an attraction like nothing either has felt before.

In Waller's novel this infatuation flowers gently, touchingly and in a way that makes time feel stretched rather than compressed. Overwrought songs were an implicit danger to trying to render this musically, yet rather than nimbly sidestepping the peril with muted melodies, understated accompaniment and half-expressed emotions, Brown unleashes the full barrage of power ballads, anguished, wordless cooing and florid exposition. Even the craft of his lyric-writing falls apart with lines in Temporarily Lost where the emphasis falls on the final syllable of "Washington" and "Lake Superior". Ouch. Otherwise that's actually one of the stronger, character-defining songs, and so a pity the words ride the melody as uncomfortably as Robert's truck does a corrugated dirt track.

Brown does remind us of his talent with Francesca's What Do You Call a Man Like That? and Robert's The World Inside a Frame, but most of the rest are overwrought, overlong, entirely superfluous or all three. A classic example is Francesca's opening To Build a Home, which is precisely how not to build a musical: with dreary scene-setting rather than instant plot. Compounding the sin in Act Two is an interminable song about Francesca's back-story.

Hoolihan forgivably struggles with these, as anyone would, but her commendable voice springs to life with What Do You Call a Man Like That?, and her performance is particularly fine as she shyly falls for this stranger, stirring together charm and embarrassment, like iced-tea and sugar.

Stenlake doesn't quite catch Robert's self-sufficient detachment, although neither does the writing, which has him expressing so much of his inner self that you expect the marrow to ooze from his bones. His songs include the fearsomely bad Who We Are and Who We Want to Be (reminiscent of Kris Kristofferson at his worst), in which the protagonists' wordless singing seems a substitute for simulated sex.

Among the extraneous characters Zoe Ioannou stands out as the feisty Carolyn, Francesca's daughter, as do Beth Daly and Michael Beckley as the neighbours, who enjoy some of Norman's sharpest dialogue. Ultimately, however, all these extras do is slow the show down, and like the songs, distract us from an interesting tale of the potential innocence of illicit love.