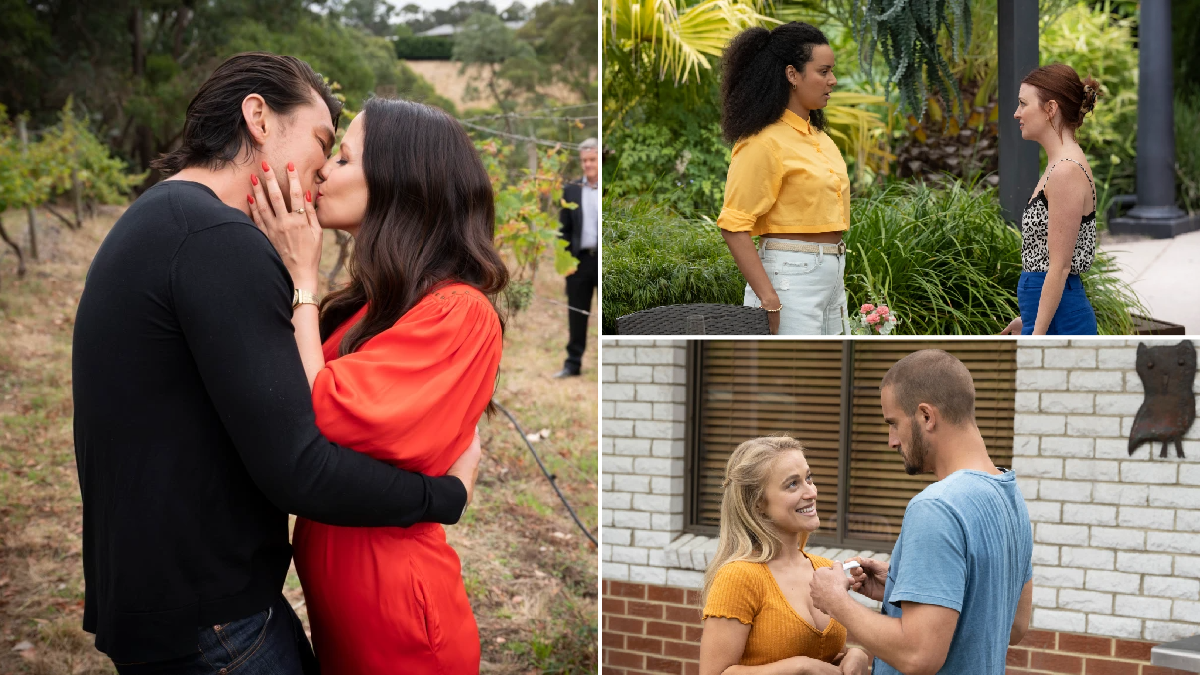 The highs and lows of this week are huge in Neighbours, with Kyle (Chris Milligan) and Roxy (Zima Anderson) hitting the peak with their unexpected news, while David (Takaya Honda) hits absolute rock bottom.

David is now the centre of a blackmail plot against him after what he did to Gareth, and with his sense of guilt ever increasing, could he be about to crack?

Paul Robinson (Stefan Dennis) has got his eyes on the prize – Montana (Tammin Sursok). But he’s about to discover his son Leo (Tim Kano) has got their first. And Paul is not someone who likes to be out-done, even by his own son.

Amy’s (Jacinta Stapleton) feeling spontaneous and makes a decision that could see her relationship with Ned (Ben Hall) hit the rocks faster than the Titanic.

And Mackenzie (Georgie Stone) may have found a new direction in life.

Here’s what’s ahead in Neighbours.

Baby joy for Kyle and Roxy as exit looms

Roxy and Kyle are at an emotional low following the devastating news that their one chance at a biological child is ruined. They decide to fight for compensation, but they know it won’t change things. They accept an offer from the fertility clinic and decide to rethink their future. Meanwhile, to cheer them up, Sheila decides to throw them a party to show them how loved they are. Instead, they withdraw from their friends and family, and ultimately make a revelation that stuns everyone into silence – they’ve decided to leave. Sheila desperately tries to get them to change their minds with underhand tactics, but when Kyle learns the offer of a new home has been rescinded, he knows exactly who to blame. The stress causes Kyle and Roxy to fight, and Roxy turns to her mum for support in understanding why she can’t regulate her emotions. But Gemma has a completely unexpected pearl of mumsie wisdom – she thinks Roxy might be pregnant. Roxy discovers it’s true and tells a gobsmacked Kyle. Now there’s even more reason to leave, for their new little family.

Pressure’s on David as he hunts for blackmailer

David is squirming after finding the note ‘I know what you did’, and now he’s on a race against time to find out who knows, what they know, and to stop them from telling anyone else. He confides in Freya that their secret about killing Gareth isn’t a secret anymore and is left fuming to learn she may have accidentally let it slip to Gareth’s ex Emma. She had one job. David is aghast and no longer trusts her, but things escalate when he receives another note, this time threatening his family. This is enough to get Freya to spring into action to help keep their dark truth a secret. David, meanwhile, reasons that Dean must be the blackmailer and confronts him. Bit of an error there, as Dean seems none the wiser as to what David is going on about. But while David is preoccupied with all of that, he doesn’t realise his own husband is starting to twig what’s really going on…

Paul wants to get Montana onside to score one up on Terese, so he decides to wine and dine her. This irks Terese, but she has no idea what else he’s planning. That said, Paul’s plans are quickly derailed, as when he goes to the vineyard, he accidentally walks in on his own son Leo getting it on with Montana. Initially, this plays right into Paul’s hands as he sees a way of once again getting back at Terese. He accuses the couple of doing things underhand in terms of Fashion Week, but this only drives them closer. Paul’s plan backfires and he finds himself shunned. But he’s not about to roll over and let this one go…

Amy’s bitten off a bit more than she can chew and can’t think straight – namely that she’s prioritising the Fashion Week design above all else. That means her beloved van is languishing and she’s lost all love for it – to the point she decides to sell it to fund her entry into Fashion Week. That’s it for Ned, he’s fed up of her doing things on a whim and not thinking things through. For him, this proves they are not ready for a family. The couple row and realise they need time to cool off, so temporarily go their separate ways. But when Ned arrives back on Ramsay Street, he notices Amy has ignored everything he’s said and put a for sale sign in the van. He’s done.

Clive’s incredible penthouse wows the pants off Toadie, Melanie and Susan, leaving Karl to re-evaluate all that he has. How can Clive have such luxury while he has nothing? He’s gutted that he hasn’t provided Susan with the amount of opulence she deserves and realises he needs to up his game – but this could lead him down a dark whole. He wants to make money fast and decides to look for investment opportunities. He stumbles across Montana Marcel and sees dollar signs. He quickly decides he’s going to invest in her newest start up. Does this have disaster written all over it?

Mackenzie is desperate for some Fashion Week work experience and puts herself forward as an unpaid intern. She bags herself a spot as an assistant to Montana, but Montana is not interested in having an inexperienced teen under her feet. Instead, she suggests Mackenzie take a step on the stage and rock the looks herself. Mackenzie’s headed for the catwalk, and could it be a whole new life?!

Nic vows to win Kiri back

Unlucky in love Nic is over the moon that Kiri is coming to Ramsay Street, her feelings stronger than ever. She feels the spark between them hasn’t died and decides this is her opportunity to show Kiri the real her. Will it work?