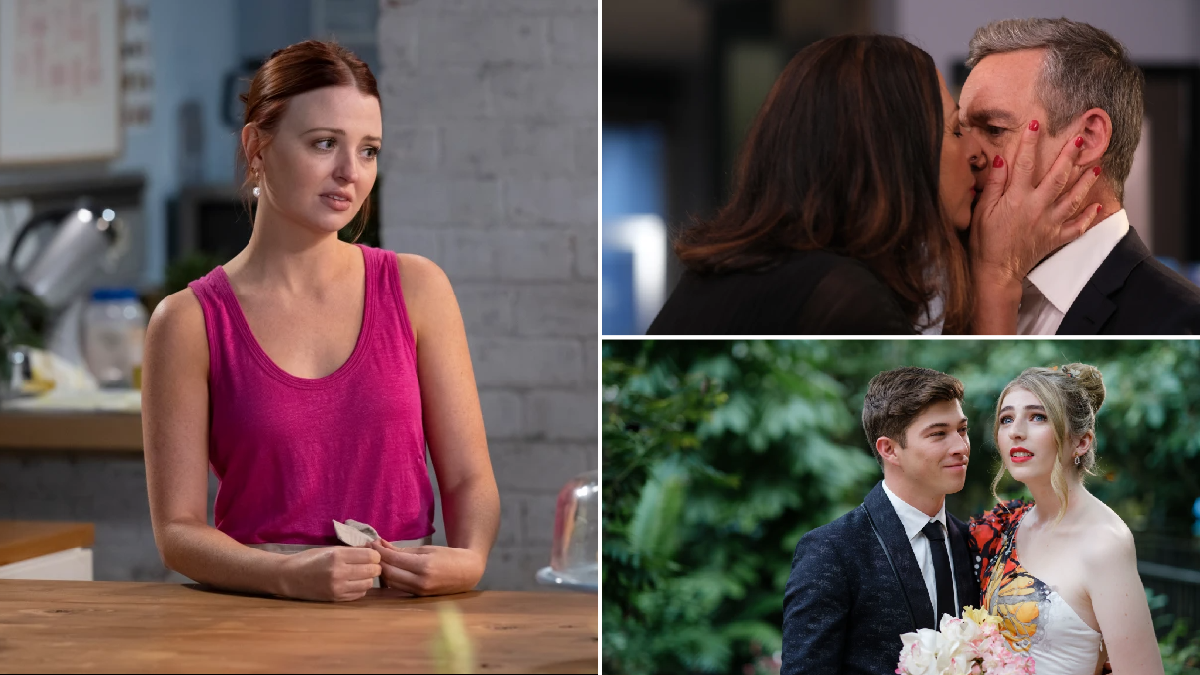 There’s joy in the Neighbours air this week as the wedding day arrives for Hendrix Greyson (Ben Turland) and Mackenzie Hargreaves (Georgie Stone), but emotions are mixed with the impending surgery. Things also look a bit dicey for Harlow Robinson (Jemma Donovan) and Terese Willis (Rebekah Elmaloglou) as one plans an ill-advised sting operation and the other discovers her mum and her ex are getting it on.

Spirits are high as it’s the day of Hendrix and Mackenzie’s nuptials, and it’s been a hard slog getting here. It’s a day of celebration, followed by the day of Hendrix’s surgery. Nerves are at an all-time high – will he be ok?

Kiri Durant (Gemma Bird Matheson) finds herself in a bit of a love triangle when she realises she has serious feelings for both Chloe AND Nicolette. Who will she pick?

Harlow is fed up to the back teeth of Corey (Laurence Boxhall) and comes up with a dangerous plan to catch him.

And things are pretty dire for Terese when she discovers her mum and Paul Robinson (Stefan Dennis) are properly getting it on.

Here’s what’s ahead in Neighbours.

Hendrix and Mackenzie tie the knot

Hendrix and Mackenzie have been doing everything in their power to get their wedding organised in time, but their impending nuptials are plagued with problems. First, their venue falls through and it’s a scramble to find another. Then, their dads begin warring and threaten to disrupt the day (because what’s a wedding without family drama?!). But the couple will not be deterred and press on with their wedding, and when it finally arrives the love in the air is palpable. They enjoy their first dance as a married couple and Mackenzie’s day is topped when her dad asks for a father daughter dance. Life is sweet. For now.

Kiri can’t make up her mind what she wants; is it Chloe? Is it Nic? She seems to be turned off from Nic when she witnesses her have an outburst and Kiri decides someone that volatile is not someone she wants to associate with. But Chloe talks her round and gives her perspective, and Nic is back on her radar. Kiri starts to find herself drawn to Nic, and her feelings are made more evident when Jane brings Asher to the wedding as a date for Nicolette and Kiri feels pangs of jealousy. To offset the green-eyed monster, Kiri hooks up with Chloe but it’s all kinds of awkward the next morning. They decide to push through the awkwardness and give it a go, but are they kidding themselves?

Harlow is still working through the trauma of what happened to her at the hands of Corey when she makes a shock discovery – he’s installed spyware on her phone and is following her every move. She’s furious that he still has her in his clutches, but quickly realises she could use this to her advantage. She formulates a plan to use the spyware to reel him in so that the police can finally catch him. Harlow starts by sending him misleading texts hoping he’ll bite, but is disappointed when she gets no reaction. Will she go to extremes to make sure he’s caught?

Terese has had enough

Terese is raging when she learns Estelle is still seeing Paul. She kicks her mum out and ignores her protests, leaving Estelle broke and homeless once again. Estelle feels she has no choice but to turn to Paul for comfort – but will they cross a line?

Hendrix and Mackenzie are husband and wife, and everything feels like a fairy-tale, especially when Pierce gifts them a free apartment. But the couple are brought down to Earth with a bump when the day of Hendrix’s surgery arrives. He’s terrified but tries to mask his fear from Mackenzie. Will he pull through?

Estelle is not only grateful for Paul putting a roof over her head, she thinks the gesture means something more. With this in mind, she goes in for the kill and plants a huge kiss on him. There’s no one more surprised by this than Paul, who thought this had all been a bit of a game and that giving Estelle somewhere to stay would get back at Terese. Suddenly things have got serious. He’s not down for that, so gives a shocked Estelle the elbow. She crawls back to Terese with her tail between her legs, but it’s no good. Terese holds firm and tells her mum she’s made her bed, now she has to lie in it.