Dave Haskins had a pressing reason of the heart to obtain an official dispensation allowing him to cross the Victorian-South Australian border.

He lives and works in Mt Gambier, South Australia. His fiancee, Bindi Triggs, is a nurse at Portland, Victoria.

The two cities are only 96km apart. 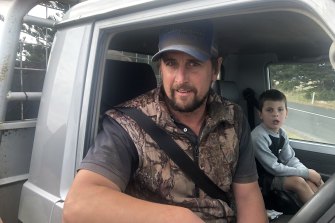 Alistair Watson manages a beef property that straddles the border. He and his son, Rory, 4, wanted answers.Credit:Tony Wright

But at 4pm on Tuesday, the South Australian Government declared the border was closed to prevent the spread of coronavirus

Only freight transport and travellers with official exemptions could cross. Everyone else would be placed in compulsory 14-day isolation if they arrived from interstate, the South Australian Premier, Stephen Marshall, had promised.

That meant Dave needed a “sticker” for his car, granting him permission to cross back and forth to spend time with Bindi.

But as the minutes ticked down to 4pm, he and a small knot of other travellers stood at the border near Nelson, waiting in confused expectation for police or government officials to give them some indication of what they should do.

No one turned up.

Most of those waiting at the border had sent emails to the South Australian Department of Health and Wellbeing, asking for exemptions to the border shutdown.

Each had received an email back saying their request had been “logged”. But that proved the end of communications.

“You’d think someone would be here,” said Dave, anxiously starting down the empty road.

Farm manager Alistair Watson had an even more urgent problem. 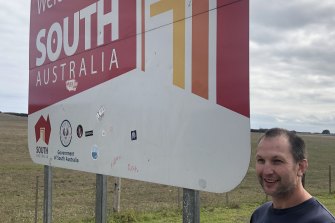 Dave Haskins of Mt Gambier waits at the border to see if new restrictions will prevent him seeing his fiancee.Credit:Tony Wright

He manages a 3000-acre cattle property, Merna, that straddles the border. He was about to take delivery of a truckload of bulls. Would the truck, driven by carrier Brenton Geue, be allowed to cross the border?

By 4.10pm South Australian Time – and 4.40pm in Victoria – those waiting for clarification simply gave up.

Dave Haskins decided to drive 74km back to Portland to spend the evening with his fiancee.

Alistair Watson took the chance that his bulls could safely be unloaded.