By the time the 2032 Brisbane Olympics roll around, there’s every chance Romanian swimming superstar David Popovici will be a household name in Australia.

For now, though, he remains relatively unknown Down Under – but the young gun has launched a charm offensive ahead of his tantalising showdown with Kyle Chalmers at the World Shortcourse Championships in Melbourne this week by labelling the Australian Olympic gold medallist a “national hero”.

After breaking the longcourse 100m freestyle world record in August, in a time of 46.86 seconds, Popovici is the hottest male prospect in world swimming and has arrived in Melbourne as the biggest drawcard for the first FINA event on Australian shores since 2007.

Despite significant hype surrounding Popovici, the 18-year-old has been quick to claim underdog status for his 100m duel with Chalmers on night three of competition at the FINA World Championships (25m), beginning on Tuesday at the Melbourne Sports and Aquatic Centre.

“I’ve heard Kyle is a national hero around here,” Popovici told the Herald and The Age. “He’s very popular. I like the fact that the country loves their swimmers so much and athletes in general.

“It’s going to be a rivalry for sure. I hope me and Kyle are going to get even better for Paris [2024 Olympics]. I hope it’s going to be a showdown, not only between us, but between a lot of competitors.” 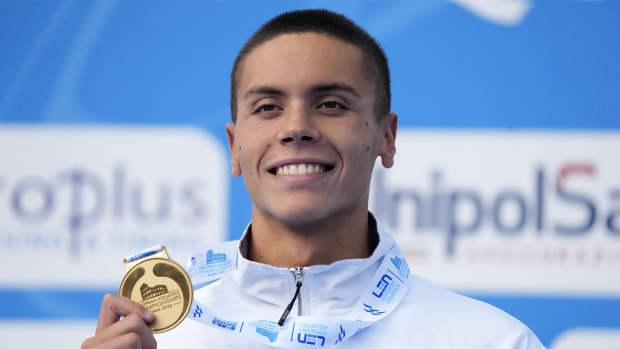 “Even though [shortcourse] is not my specialty, I will do my best and try and learn as much as possible.”

Chalmers is the favourite for the blue riband event. The South Australian is the world record holder, sharper on his turns – which is crucial in pool half the size of the Olympic standard 50m – and will be buoyed by the rare chance to race in front of a home crowd.

“The team is absolutely buzzing at the moment. It makes me a bit emotional to think that my family and friends are going to be in the crowd.”

When it comes to longcourse, Popovici does not shy away from setting ambitious goals. His improvement in the 12 months since the Tokyo Olympics has been marked, with world titles in the 100m and 200m freestyle events solidifying his growing reputation as one of the early gold medal favourites for Paris 2024.

All of which suggests his claim to underdog status isn’t entirely accurate, although Popovici assures he’s not foxing ahead of his first meeting in Australia.

“I don’t think it’s a bluff. I don’t like shortcourse that much,” Popovici said. “It’s good coming here knowing I’m not actually the best, yet, in shortcourse. I live for racing. Sometimes it’s good knowing you’re not the favourite. I’m definitely not the crowd favourite and I’m OK with that.

“I am extremely pumped for this competition. I can see why Australian people are looking forward to the race.” 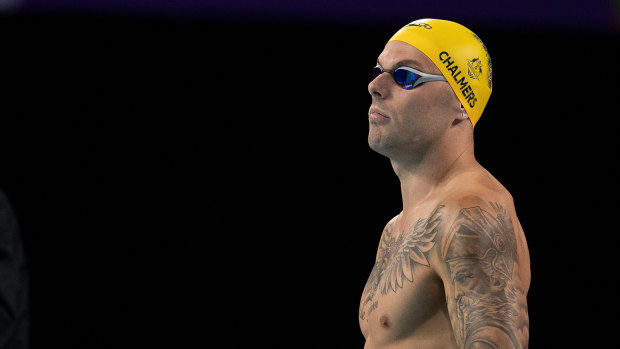 At 24, and with a body breaking apart with every year of competition, it’s a safe bet that Chalmers won’t be on the blocks at the Brisbane Olympics.

But there’s no reason why Popovici can’t carve out a 10-year career and make it to Australia’s first Olympics since Sydney 2000.

“I’m going to be 27 or 28, so hopefully I hope to come back here and swim here for the Olympics in 2032,” Popovici said. “Even if I’m not swimming, I’m going to be here in the stands cheering for people who used to be just like me when I had my first Olympics.”

There are very different motivations for the 750 athletes from 166 countries competing over six days in Melbourne.

Popovici wants to sharpen his turns to better his longcourse performances, while the lure of a home crowd has enticed the likes of Emma McKeon and Kaylee McKeown to compete before a well-earned break.

Meanwhile, American star Lilly King had a simple explanation for why she decided to compete in her first world shortcourse meeting since 2016.

“Long story short, I just wanted to come to Australia,” King said. “Australia is like the USA’s southern cousin. Similar, but different.”

News, results and expert analysis from the weekend of sport sent every Monday. Sign up for our Sport newsletter.