A talented Texas teenager has revamped Britney Spears’ debut song Hit Me Baby One More Time, turning it into a viral coronavirus-themed ballad.

Singer Margaux Beylier, 18, from Houston, took to TikTok earlier this week to share a video of herself performing the song, and her a capella rendition quickly went viral, earning a staggering 7.9 million views and more than 2.1 million likes.

Using the popular tune from 38-year-old Britney’s 1998 hit, Margaux, who was on the third day of quarantine, sings: ‘Covid-19 is killing me and I, I must confess I hate quarantine (quaratine). 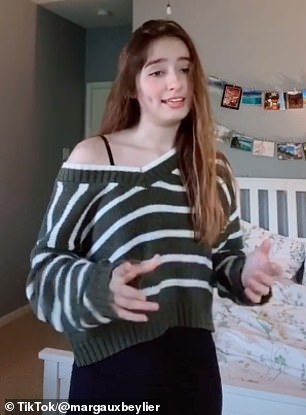 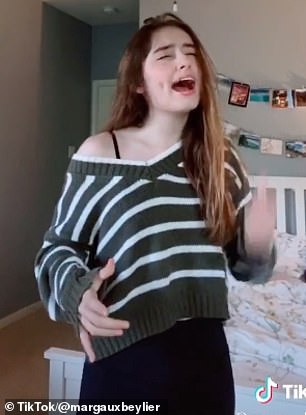 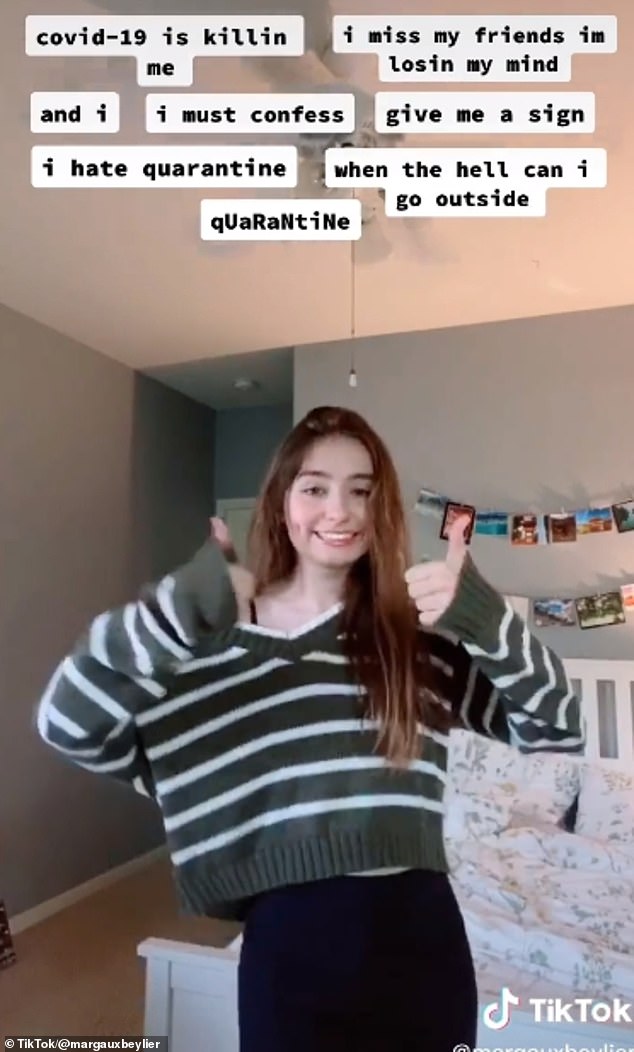 Thumbs up! The Texas teen changed the lyrics of the song to fit the quarantine theme, ending the tune by asking, ‘When the hell can I go outside?’

‘I miss my friend, I’m losing my mind. Give me a sign, when the hell can I go outside?’

The video, which appears to have been recorded in Margaux’s bedroom at home, was met with high praise from viewers, with thousands of people applauding the teenager in the comments section.

‘Love this wow,’ one person wrote, while another chimed in: ‘OK this is honestly so good tho.’

A particularly enthusiastic fan offered to submit the video to The Voice in order to secure Margaux a spot on the next season, and another simply said: ‘I’m so in love with your voice.’

Many commenters went wild for Margaux’s ‘voice cracks’, the moment in the song when her voice breaks slightly, with fans praising the authenticity that it adds to the video.

More than 7,500 TikTok users showed their appreciation for Margaux’s song by using it in their own videos, many of which showed people stuck inside amid the coronavirus pandemic. 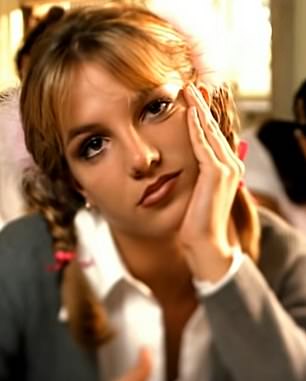 Iconic: Britney released her debut song Hit Me Baby One More Time back in 1998

This is not the first time that Margaux has put her own personal spin on a classic hit, in fact she regularly shares videos of herself performing a capella versions of much-loved songs on Instagram, TikTok and YouTube.

Last week, she recorded a stunning version of The Killers’ Mr. Brightside, and in January she filmed herself singing Owl City’s hit Fireflies.

Margaux is also not the only person to put a Covid-19-themed spin on a classic hit; on Wednesday, popstar JoJo delighted her fans when she released a new version of her much-loved 2004 song Leave (Get Out), changing the lyrics to focus on the importance of social distancing and self-isolation.

The 29-year-old singer shared a TikTok video of herself belting out the new lyrics to the tune, which is now aptly called ‘Chill (Stay In).’

‘I never thought corona could be such a nasty b***h,’ she sings at the start of the video. ‘But now that she’s here, boy, all I want is for you to use common sense.’ 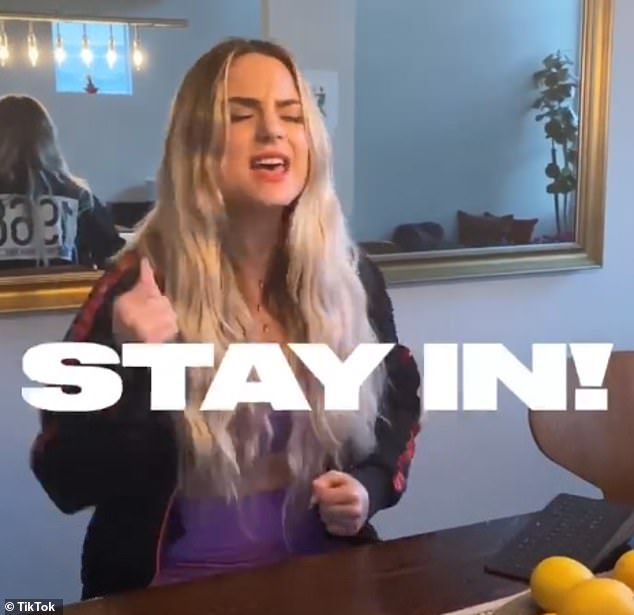 Remix: On Wednesday, popstar JoJo, 29, delighted her fans when she shared a TikTok video of herself singing the new coronavirus-themed lyrics to her 2004 hit ‘Leave (Get Out)’

Loving it: Thousands of TikTok users took to the comments to praise her for the tune

The updated chorus is all about the things people can do to help prevent the spread of the virus, from staying quarantined to frequent hand-washing.

JoJo pounds her fist on her dining room table to the beat of the song while crooning: ‘Stay In! Right now! Do it for humanity! / I’m dead***! About that! But we will survive / So you gon’ learn how to cook now / and practice good hygiene / I know you’re bored and want to f**k around but not on me.’

In the following lyrics, she asks why people are ‘acting so confused,’ noting that ‘the CDC laid it out for you.’

Like the original song, the new one is also about a liar, but instead of being unfaithful, the villain is enjoying nights out on the town.

‘To go behind my back and hit the bar shows how immature you really are,’ she sings before belting out the final verse: ‘Keep exposure to a minimum.’

JoJo tweeted that she would be releasing the full song sometime on Thursday, writing: ‘Droppin the full version of Chill (Stay In) tomorrow. Just doin my part, y’all.’

Get ready: JoJo tweeted that she would be releasing the full song sometime on Thursday 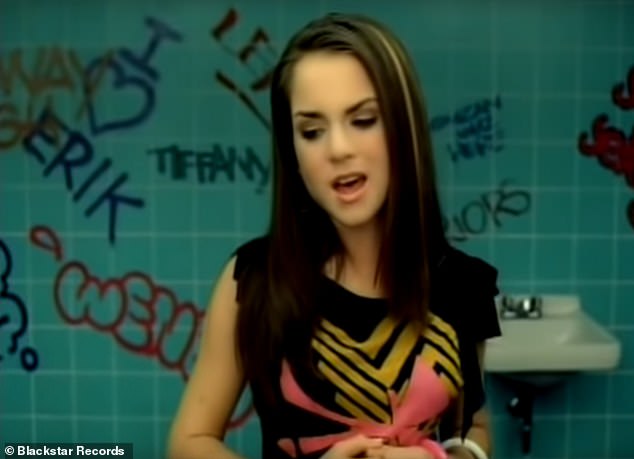 Never gets old: The singer was just 13 years old (pictured) when she dropped her debut single ‘Leave (Get Out),’ and 16 years later it has morphed into a coronavirus anthem 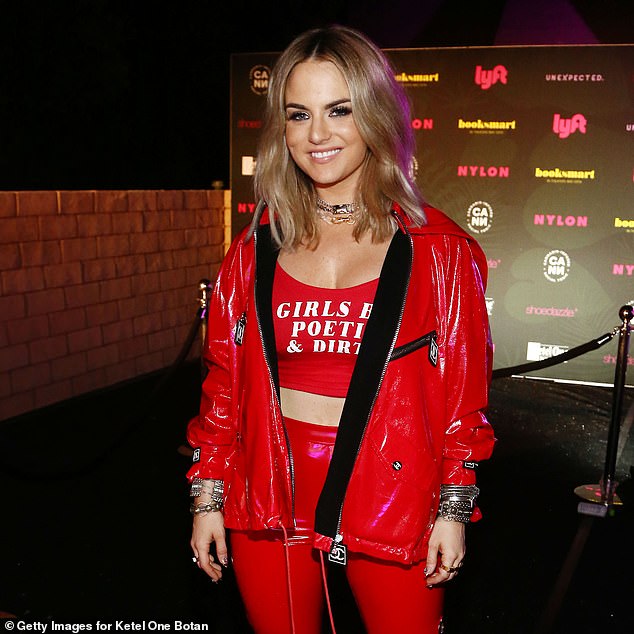 New stuff: JoJo is set to drop her new album, Good to Know, on May 1

The singer was just 13 years old when she dropped her debut single ‘Leave (Get Out),’ and 16 years later it has morphed into a coronavirus anthem.

The video, which was also shared on her Instagram page, has been viewed more than two million times on TikTok, and thousands of fans took to the comments to praise her for the tune.

‘OK I NEED A FULL VERSION,’ one person wrote, while another noted: ‘MY CHILDHOOD MEETS 2020.’

‘Ugh 90s babies in their feels for sure,’ someone else agreed.

‘I found our new national anthem,’ one TikTok user gushed.

JoJo, who has released two other LPs since her debut single, is set to drop her new album, Good to Know, on May 1.

As of Friday lunchtime, there were more than 14,300 confirmed cases of coronavirus in the US; 211 people have died as a result of the illness.