Jonny Greenwood (left), 48, is lead guitarist with English rock band Radiohead. Richard Tognetti, 54, is the Australian Chamber Orchestra’s artistic director. Despite their distinct musical styles, the two are finely in tune with each other. 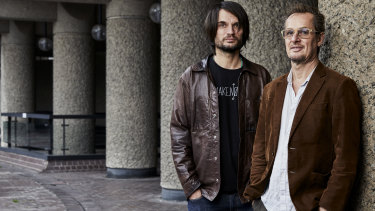 Richard Tognetti on Jonny Greenwood (left): “I do want Jonny to write more for the ACO, but he has a lot of planes on the runway and we are just one of them.”Credit:John Davis

RICHARD: I don’t mean to sound hubristic but my friendship with Jonny is a musical one; I honour him because he keeps classical music alive in the rock and pop world. When people turn up to a Radiohead concert, they end up listening to some damn serious music.

It was when they came out with [the 2000 album] Kid A that I started paying grave attention. Then I saw the 2007 film There Will Be Blood and the music was incredible. I had to stay for the credits and saw Jonny Greenwood’s name. I thought that was impossible, then I remembered he’d written [the score for] Popcorn Superhet Receiver, which put him on the radar as a classical composer. I ran home to listen and realised he’d adapted it for the film.

Fast forward five years: Radiohead were touring Australia and we got a call out of the blue asking if we were interested in commissioning a piece from Jonny, and could he come and work with us. He’d been playing to 50,000 people a night, which can’t be very good for you. He collapsed, as you would, then wound himself up again to get into writing.

We found a place for him and his family – Baz Luhrmann’s old house [in Sydney’s Darlinghurst] – and hung out together. His son and mine were both about 10 and desperate to go surfing, though Jonny’s wife freaked out. I said, “Come on, Sydney is safe, shark sightings are very rare.” Then we got to Palm Beach and there was the yellow-and-black sign denoting activity. So that was that: no surfing.

Jonny wrote a piece for the ACO called Water and played this one-note drone on the tanpura with the orchestra like an Alfred Hitchcock cameo. I know a lot of composers who write on computers, but Jonny has craftsmanship. He can sit down with pen and paper, he understands the horizontal and the vertical, he understands structure.

While he was in Sydney, ACO Underground was playing uber-contemporary music at this venue called The Standard – the old Kinselas – and Jonny agreed to play with them. [My wife and ACO principal violinist] Satu [Vänskä] introduced him in her understated Finnish way, “Welcome on stage, Jonny Greenwood,” and the audience were like, “What??!!” He played a fantastic piece of American minimalism for electric guitar by Steve Reich.

I’d love to see him unleash his imagination on a concerto for electric violin but I think, because he deals in electronica in his day job, he wants to immerse himself in acoustic instruments. He seems to have two followings now: obviously Radiohead, but also people who come to hear him as a composer. He should be really proud of that. He’s very self-deprecating but also very well prepared; his written music is immaculate.

We go to great pains to promote him as a composer. I do want him to write more for us, but he has a lot of planes on the runway and we are just one of them. It’s amazing having a relationship with a living composer who’s so humble and talented. We keep in touch by email. My friend [actor] Jack Thompson says real mates don’t have to see each other, they communicate in other ways. That’s the mateship I have with Jonny.

JONNY: All I knew about the ACO from reviews was that they were the best chamber orchestra in the world, so it was a happy coincidence that our 2012 tour ended in Sydney and I could stay and work with them.

Richard is strange because I don’t think he realises quite how good he is.

That tour was tough; Richard found us a house and we became very good friends. He would turn up at the house and we’d work on music. It’s funny, but when I think of us hanging out in Darlinghurst and then I see him on stage, he doesn’t seem like the same person.

Richard is strange because I don’t think he realises quite how good he is. When he is actually playing, it’s like the violin is grafted into him, or as if he is moving another limb. You could say it’s effortless but it’s more than that: when he puts the violin down it’s like he doesn’t know what he’s been doing, as if he’s been somewhere. I think that the violin was a retreat for him as a child; a big comfort.

In Sydney, he tried to get us into surfing but we were too pallid and English. Then Richard took us up to Byron Bay, where the big highlight was sitting in a restaurant when Barry Humphries came in. He came over to say hello to Richard and rested his hand on my daughter’s head. For me, that was papal.

Richard revels in Mozart and Haydn, et al, well outside what I know and understand, but when you see him play it’s so youthful and vibrant, and so far from the dusty vinyl you don’t buy because it’s symphony No. 100-and-something and you don’t trust someone so prolific. Which is childish, of course, and listening to the ACO disabused me of such prejudice. But at the same time as being steeped in the classical tradition, he is open-minded and keen to experiment. When I wrote Water for the ACO in 2012, I took it to Richard as [a piece for] piano and violin, but I had to explain that it was a concerto for solo tanpura – essentially one note – and everything had to revolve around that.

Some people are very up themselves about music and being musicians; Richard is the opposite. One time I mentioned building software for music and the next day he came in carrying an electric violin; he’s very hungry for information. When I see him next, he’s going to want to talk about electric violins and computers and I will have to explain that I’ve had it. With electronic music you have some variables; with an orchestra it’s infinite.

I always told Richard that if I wrote a violin concerto, it would be for him. Then I had an idea for a piece for 48 violins – it was performed in 2019 at The Proms – and I had to email him to say, “Look, I’ve written this thing and there are 68 people on stage so it’s not really suitable for you.”

To read more from Good Weekend magazine, visit our page at The Sydney Morning Herald, The Age and Brisbane Times.