You could broadly categorise TikTok videos into five genres: jokes, stunts, pranks, promos and tricks. Each is less a description of content than intent.

Items in the joke category aim for wit, levity or originality. Sketches feature deliberately lame costumes, the puns are dad-worthy, and the coronavirus gags are appropriately pandemic – but the sheer volume of comedy marks TikTok off from its competitors. 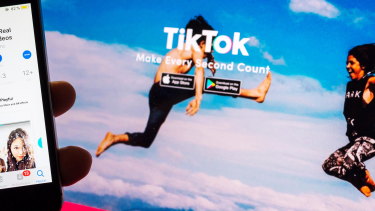 TikTok is becoming a marketing tool for companies.Credit:Alamy

Stunts are efforts to impress through physical prowess or painstaking effort. The challenge dance is easily one of the platform's most popular memes, as are lipsynch routines, elaborate Rube Goldberg-esque contraptions and special effects wizardry.

On Youtube and elsewhere the prank has made stars of many, but TikTok's generally amiable atmosphere doesn't gel so well with potential public humiliation. A mean-spirited prank, especially, isn't likely to go viral on the platform.

Promos sell their maker as a brand. These include the strange sub-genre in which users list reasons someone might want to date them as well as its opposite, where the text lists reasons they're undateable.

There are also the tutorials that go behind-the-scenes to show how a user's other, more spectacular video was created (usually in the stunt category).

Oddly enough, these are far more popular than the original video being dissected.

Tricks are the least satisfying of TikTok videos, solely designed to score likes and follows. They're stunts in which a payoff is promised for viewers who come back tomorrow, and videos in which nothing appears to be happening but viewers are asked to 'wait for it…' (nothing happens by the end, either).