The great chicken kiev battleground: Demand grows for brands to change Soviet spelling to ‘kyiv’ in solidarity with Ukraine – but where does the popular dish REALLY come from?

Customers are calling for food brands, restaurants and supermarkets to change the spelling of chicken Kiev to Kyiv in solidarity with the Ukrainian people amid a social media campaign to ditch the Soviet spelling – but questions remain over the origins of the dish.

James Chiavarini, owner of Il Portico and Pino in west London’s Kensington High Street, revealed yesterday that chicken Kyiv is ‘back in the menu’ and £5 from every order would be donated to help out victims of the Russian invasion.

The high-end Dublin-based hamper, picnic and wine shop Fallon & Byrne also revealed that they were renaming their Food Hall item to ‘Chicken Kyiv’. Irish food producer Finnebrogue, owner of the Better Naked brand, and Chelmsford business, Our Local Butcher, have done the same.

None of the major supermarkets have made the change but Morrisons and Sainsburys are both ‘considering’ and ‘reviewing’ the situation. 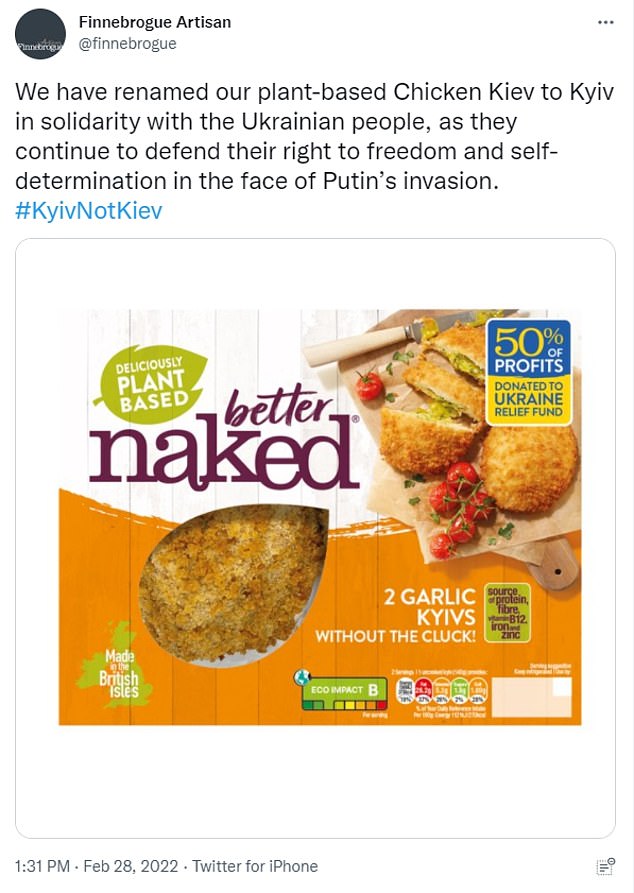 Food brands and restaurants are rebranding chicken Kievs, chicken Kyivs in solidarity with the Ukrainian people amid a campaign to ditch the Russian spelling, but questions remain over the origins of the dish. Irish food producer Finnebrogue has changed the name of their product 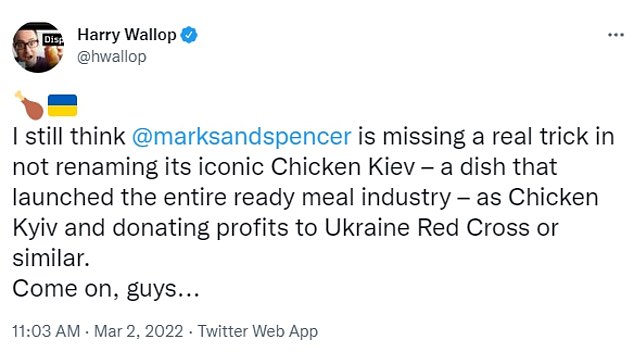 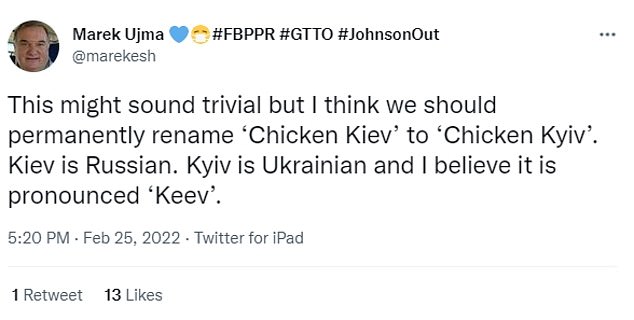 Proponents claim changing the spelling is a small, peaceful way to show solidarity with the people of Ukraine and taking a stand against Russia. Above, Twitter support for the campaign

Proponents claim changing the spelling is a small, peaceful way to show solidarity with the people of Ukraine and taking a stand against Russia.

BBC reports have led the way in this campaign, changing their spelling and pronunciation of the Ukrainian capital to ‘Kyiv’.

Yet the origins of the dish to which Kyiv gives its name are disputed.

It became widely popular in Western countries in the 1970s and was even served at a May 1990 dinner at the Soviet embassy in Washington DC to then leader Mikhail Gorbachev as Soviet Union collapsed.

Kiev vs Kyiv: Why the change in spelling?

‘Kiev’ was the standardised spelling for the city under Soviet rule, and recent Russian aggression has seen more Western institutions heed Ukrainian calls to abandon it.

The UK Government has been referring to its embassy as being based in ‘Kyiv’ for years, with an Internet archive showing this had been the case until records began in 2014.

Ukraine’s capital is known as Київ in Ukrainian and Киев in Russian. Both terms do not have a direct translation into the Roman alphabet, with Kiev, Kyiv, Kyyiv or Kiyev all being possibilities.

But the spelling ‘Kiev’ is intrinsically linked with the old USSR due to its widespread use by the British and Americans while the city was under Soviet rule.

This continued after independence in 1991, until ‘Kyiv’ was legally approved by the Ukrainian government.

It was not until the Maidan uprising of 2014 the issue hit the public consciousness, with the ousting of pro-Russian Viktor Yanukovych and the creation of a new administration seeking closer ties to the West.

Young Ukrainians see ‘Kiev’ as a relic of the Soviet past, and this view is now shared by the government, which launched a ‘KyivNotKiev’ campaign in 2018.

A strikingly similar dish, ‘chicken fried in batter’, appears in the 1861 edition of the domestic bible, Mrs Beeton’s Book of Household Management.

Other Ukrainian oral traditions claim the Continental Hotel in central Kyiv invented the modern version of the dish in the early 20th Century.

There is another theory that the dish is French and was brought to Russia in the 1840s by chefs of the royal family who were sent to learn the latest culinary techniques in Paris.

‘The dish was made in Paris with veal but in Moscow, it was made with chicken. At that time, chicken was more expensive and considered more of a delicacy,’ Russian chef Viacheslav Gribov recently claimed.

Originally served only in high-end dining rooms such as the Merchant Club in Russia, Gribov claims Ukrainian chefs then perfected the modern day recipe – which does not include garlic or cheese, has a bone sticking out to stop the butter leaking, and, if done properly, some of the butter remains un-melted.

‘This began as a dish for dignitaries meeting one another. You would never serve them garlic,’ he said. ‘We don’t just learn how to make the dish; we also learn a special way of serving and cutting it to avoid butter splashing out.’

The dish eventually became more common and was served in Russian Tea Room in New York in the 1950s to cater for new immigrants. Some believe this is when the name ‘chicken Kiev’ was first coined.

The dish was popularised in the UK in the 1970s thanks to a range of ready meals from M&S and was a household staple by the 1980s.

Despite the confusion over where exactly the breaded dish come from, shoppers are still eager to have the name changed on shop shelves and packaging in a show of solidarity. 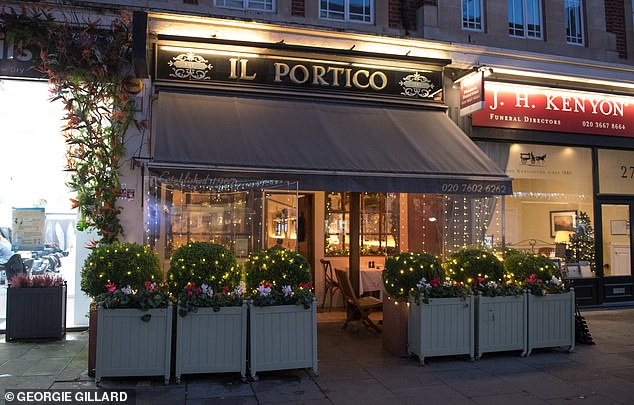 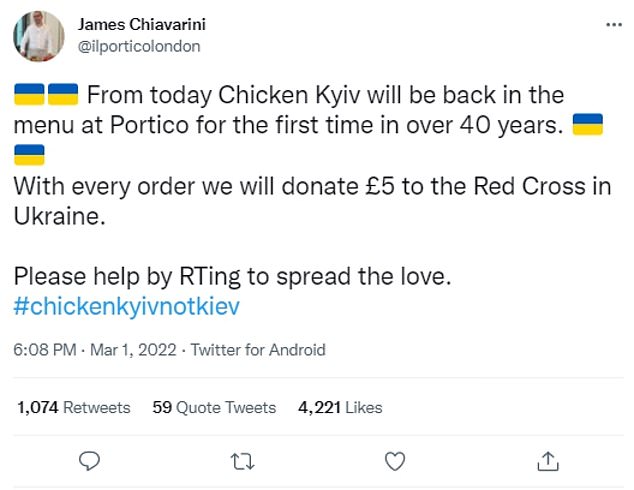 James Chiavarini, owner of Il Portico and Pino in west London ‘s Kensington High Street, revealed yesterday that chicken Kyiv is ‘back in the menu’ and £5 from every order would be donated to help out victims of the Russian invasion 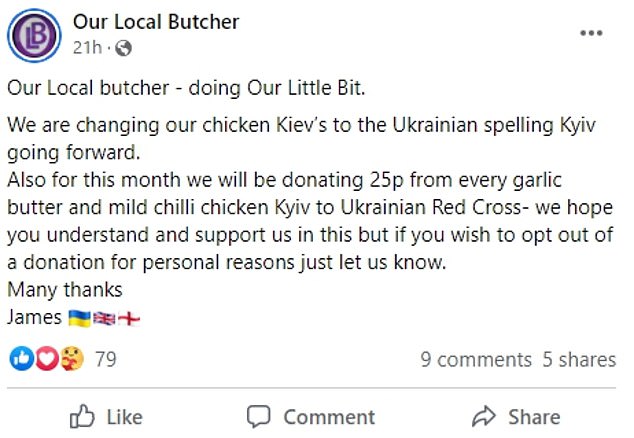 The Chelmsford business, Our Local Butcher, also said it would be altering the spelling

One tweeted: ‘I still think @marksandspencer is missing a real trick in not renaming its iconic Chicken Kiev – a dish that launched the entire ready meal industry – as Chicken Kyiv and donating profits to Ukraine Red Cross or similar. Come on, guys…’

Another posted: ‘Lets start a campain to rename Chicken Kiev, the Russian name for Kyiv, to the Ukrainan name and call it Chiken Kyiv from now on. #Ukraine Support Ukraine.’

A third wrote: ‘We had Chicken Kiev’s for lunch; maybe Mr Tesco needs to rename them Kyiv’s out of respect? #UkraineWar #PutinPackyourBags.’

A Facebook group, simply named ‘Chicken Kyiv’, has been created to advance the cause of renaming the beloved breaded dish.

The group’s administrator wrote: ‘It seems to me that a good passive protest would be to lobby supermarkets and food manufacturers to rebrand the humble Chicken Kiev in honour of the valiant city whose soviet-era name is still used.

‘We should start calling the dish Chicken Kyiv, out of respect, or even Kyiv Suprême. And we should start eating it and posting pictures as another sign of support.

‘Anyone working in restaurants and food retail get lobbying.’