Ahhh, smell that schadenfreude. George Clooney, the cow-eyed Hollywood heart-throb and activist, has declared himself "surprised and saddened" by the revelation that Nespresso may have been using child labour.

Clooney has been "global ambassador" for the coffee company for 14 years, and sits on its "sustainability advisory board" to help keep it ethical. But a new Channel 4 investigation has found that children as young as 11 are working on some Guatemalan farms that may supply Nespresso. 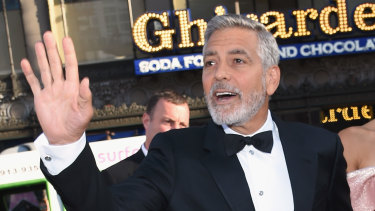 Actor George Clooney has discovered he may be in bed with a company that has used child labour.Credit:Getty

Why would a man with such a prominent social conscience, so prone to moralising, get into bed with Nespresso in the first place? The company – owned by Nestle, of baby milk infamy – single-handedly reinvented coffee-making to introduce a new form of superfluous packaging. Less than a third of its single-use capsules ever make it to one of Nespresso's specialist recycling centres. In Britain alone, around 350 million coffee pods (including those of copycat brands) get swept into landfill every year.

"He does not believe who does not live according to his belief," wrote the English cleric Thomas Fuller. If your deeds don't match your words, you will face accusations of being a hypocrite. And yet, I feel for Clooney. Because I am a hypocrite myself, and so are you. Living virtuously – an arduous task under any circumstances – is next to impossible when everything you eat, drink, wear and do depends on the complex supply lines of global capitalism.

What is it you care about? Climate change? Better go vegan, then. But wait! That almond milk you're about to slosh into your coffee (which you can't be sure wasn't harvested by pre-teens) will almost certainly have come from the almond plains of California. This vast, monocultural landscape, dripping with pesticides and fungicides, has become a sort of killing field for bees, billions of which are bussed in every winter to pollinate the almond trees. More bees die every year in the US than all other fish and animals raised for slaughter combined.

Every attempt at virtue collapses in on itself. That organic cotton bag-for-life you bought in order to cut down on plastic bags? You'd have to use it 20,000 times to make up for all the extra resources that went into making it. Boycotting palm oil to save the orangutans? Well, yes, but an oil palm produces more oil per hectare than any other plant. Whatever replaces it might lead to worse deforestation. Even the case against coffee capsules turns out to be complicated: they are extremely efficient at reducing coffee waste, and thus saving carbon.

This is not an argument for consumer apathy; only for humility. We can – we must – try to live conscientiously. But perfect virtue is a delusion. Imperfect hypocrisy may be as good as it gets.