Weddings are dreamy. The white dress, the layered cake, the slow first dance. The public declaration of love, the bridesmaid dresses, the speeches. They can be so beautiful. Brides and grooms describe their wedding as the best day of their lives. But what if you don’t fancy being ogled by 200 of your closest friends? What if you don’t want to pay a small fortune for flowers that’ll wilt before the night is out? What if you don’t like crowds, don’t like tradition, or don’t like organising large scale events, even in the name of love?

Perhaps the most romantic possible scenario is to run away to a stupidly beautiful location and get hitched with just enough people to legally witness the ceremony. Whether it’s pragmatism or romanticism, lots of couples decide to do exactly that.

My dad married my stepmother in a Las Vegas church. I see pictures of elopements on Instagram and absolutely swoon.

As I contemplate love and marriage and promised forevers, I spoke to four women who decided to ditch the conventional wedding ceremony and elope instead. Here are their stories.

“We were in the midst of starting to plan our wedding in our hometown of Sydney from our then-base of London, when someone suggested eloping as a joke. I ended up in a Google spiral for hours, reading up about eloping and how to do it. That night I went home and casually suggested it to my fiancé, and he was like, ‘sure!’ We were already planning a huge trip to Italy before we returned home to Sydney from London, so we decided we’d make the trip extra special and have a ceremony in Tuscany, just for the two of us. We booked a celebrant, my husband bought a suit, and I ordered a simple white linen dress online from Reformation and that was it! 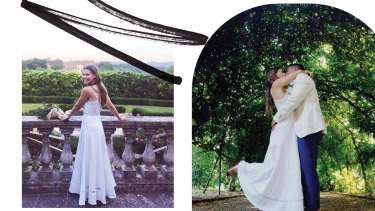 “We told our parents and siblings, and although they were a bit surprised to begin with. In the end, it just came down to the fact that they were happy we were happy. We hosted a dinner at a Sydney restaurant a couple of months after we got home, which coincided with the day we signed the legal papers to certify our marriage legally in Australia. (It costs a lot of time and admin to legally get married overseas, so we saved this part for when we got home. Although my husband and I both count our Italy wedding day as our official anniversary.)

“I love going to weddings! But when we originally started planning a wedding, I was so put off by the commercial nature of everything, and I really didn’t have a concept of how expensive it really was going to be. For me, it’s not worth spending thousands of dollars on flowers that last a day and that no one is going to remember, when I could be putting that money towards building a home that could last us forever. We looked at it from a really practical sense.

“We did everything ourselves, simply, because that’s how we like it. We brought along a disposable camera and a GoPro and captured the whole day ourselves rather than spending hours posing awkwardly in front a photographer we don’t know. We made a Spotify playlist of our favourite songs, instead of hiring a DJ. We had an incredible eight course dinner in a villa in Tuscany with a private chef, instead of chasing down canapes at a wedding reception. We forgot to buy some flowers at the markets in Italy, so just before our ceremony I picked up the flowers from our hotel bedside, shook off the water – and off we went! I have absolutely no regrets.”

“Last year, we were talking about getting married and I mentioned that I didn’t want a big wedding. Mac said we could have a small wedding, and I said I’d rather elope. We were going to Morocco on a holiday anyway, so I suggested we just have a ceremony there. He said no for a while, but I kept bugging him about it, and then he agreed. He hadn’t even proposed at this stage! He did that two months later. 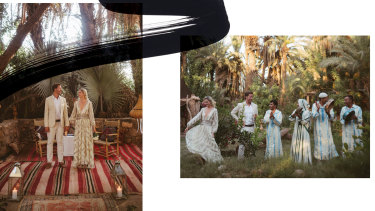 “I’ve never been the kind of girl who dreamed of a big, white wedding. So instead, we just organised a hotel in town about six hours south of Marrakesh, in an oasis with palm trees and cacti. It was just us, our friend Natalia who is a photographer, and some locals. We did a civil ceremony when we got home and had a party, which we count as our reception. We have big families, so it was a big party. We’ve got seven parents between us and millions of siblings. We had some speeches and we shared some of our vows, so the people we love felt included.

“We told our families before we left for Morocco. Mac’s dad said he was concerned about how the mothers would take it, but the mothers were cool with it. We told a few close friends beforehand, too, so it wasn’t a complete secret. Otherwise, people just found out when we put the pictures up on Instagram.

“I ordered a dress online from America. It’s long-sleeved, with sequins, in a sort of beige colour. We made a video of the ceremony in Morocco. We danced, we had dinner in a tent, and it was all over by 8 or 9pm. We got the idea from this couple we know who did it in the Maldives and then had a party in Byron Bay. It was just the best decision. Lots of friends have since said to us that they wish they’d done it this way, because their weddings were so stressful.”

“We were considering a traditional wedding but I am originally from Poland and my family is huge – my dad has eight siblings! – so we were both dreading having a big wedding in front of people that I don’t even know or remember and Toby definitely hasn’t met. We wanted to have a nice relaxing day, where the main focus would be on us and our love, not pleasing someone else. 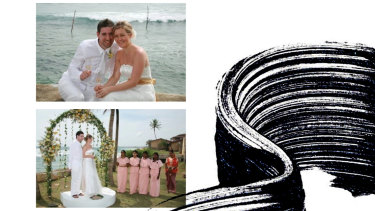 “There was also the question of religion. My family is very Catholic and Toby was baptised in the Church of England. We are not very religious people so we decided to have a Buddhist ceremony! Their wedding traditions are really beautiful.

“I don’t remember who first suggested it. After stressing about the thought of organising a big fat Polish wedding, we said that we might go away on holiday somewhere warm, but then we thought why don’t we get married while we are there? It was 11 years ago. We went to the south of Sri Lanka and stayed in the most beautiful hotel by the Pacific Ocean. All our friends and family thought that we were just going away on holiday.

“Two of our friends were emigrating to Australia at that time and they really wanted to meet up with us in Sri Lanka. So we told them that we were getting married and they agreed to be our witnesses. So they were there with us on the day, plus another couple that got married at the same hotel a week earlier that we had become friendly with during our stay.

“I was wearing a cheap and cheerful dress I bought a week before a trip. Toby wore a white shirt and trousers and flip flops. On the day of the wedding, before the ceremony, I went for a nice spa treatment and Toby was drinking beers on the beach. It was all very relaxing. In the evening we had a nice dinner that was set up in the middle of the pool. After the wedding we went on our honeymoon, travelling around Sri Lanka for two weeks. The whole thing was just magical.”

“It was his idea, initially. We’d been together five-and-a-half years and I’d been hoping (and hinting) for a proposal but I didn’t think he was ready. After dinner out one night, three weeks before a planned family holiday to New York, he suggested we just run away and get married in Central Park. Naturally, I did not let him off that easily and insisted upon a proper proposal. I didn’t need a ring and a bent knee, but I needed the official question to be popped properly. Our love story actually spans 16 years, with a few things – kids and another marriage – happening in between. 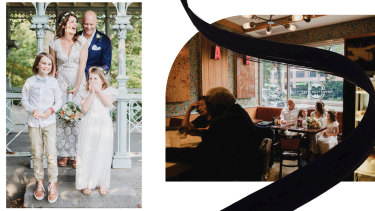 “Our friends and family were thrilled. They all agreed it was totally an ‘us’ thing to do. The mums were delighted and a little tearful, and his mother was a little sad that she missed the festivities, but we are total gluttons for fun so we’re having another wedding celebration this week with friends and family.

“The secret nearly killed me. We announced the engagement immediately, and everyone was saying how surprised they were that I was at being so blasé and not making any big plans straight away. I told one very dear friend because I needed help choosing a dress. Some decisions cannot be made without a trusted opinion. Not telling all my closest girlfriends was torture but their reaction was worth it.

“We got our photographer to give us a couple of images immediately and we sent them to everyone and called them straight away saying, “look what we did!”.

“We are absolutely thrilled with ourselves. It was so romantic and surreal to do it in New York with only my children and a friend as witness. It was positively dreamy.”

This article first appeared on Future Women, a club connecting women through community, events and journalism. You can join here. Emily Brooks is the editor of Future Women.