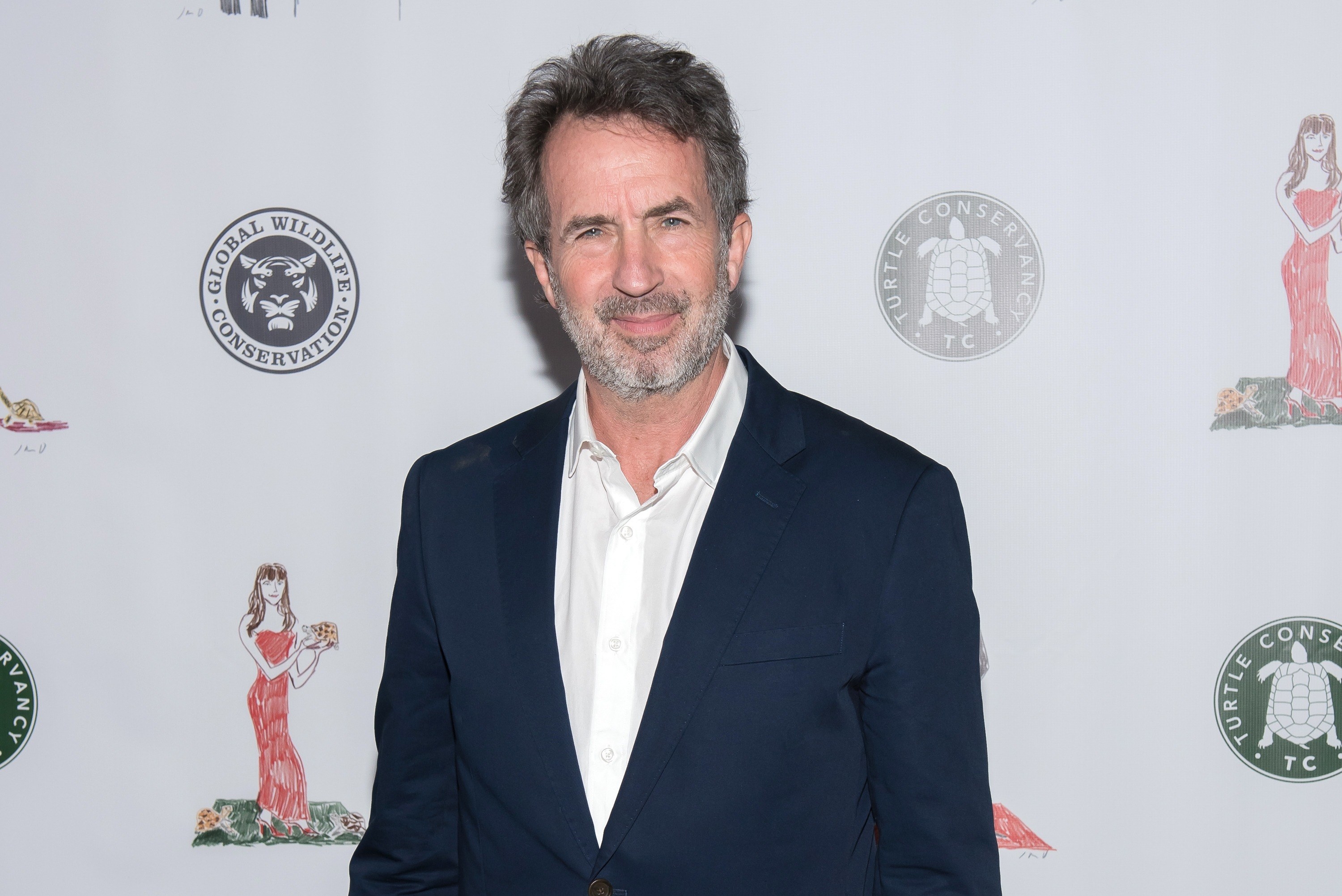 Eric Goode attending a 2017 fundraiser at The Bowery Hotel, one of the venues he owns.

Staff employed at one of the restaurants owned by Eric Goode, one of two people behind the smash hit Netflix documentary series Tiger King, are pleading with the wealthy businessman for financial aid after he laid them off due to the coronavirus pandemic.

Goode, who served as director and executive producer of Tiger King along with Rebecca Chaiklin, is a New York artist-turned-hospitality mogul and conservationist who owns several upscale hotels and restaurants in Manhattan, including the Bowery Hotel, the Jane Hotel, and the Waverly Inn. One of his restaurants, B Bar and Grill, has been a fixture in the trendy NoHo neighborhood since 1994. Goode, who owned the site, sold an interest in the property last year to developers, pocketing almost $60 million.

“We made him a lot of money,” said Arturo Vasquez, who worked for Goode for 22 years at B Bar, most recently as a chef. “I was always there. I never missed it… At the least, leave me with compensation or something to help with this problem we have.”

Vasquez was one of roughly 70 waiters and cooks at the restaurant who were, like hospitality workers across the US, laid off last month when the restaurant shut its doors indefinitely due to the pandemic. But four staff members at the restaurant told BuzzFeed News that unlike other wealthy hospitality leaders who have donated salaries and worked to fundraise for those suddenly out of work, they have heard nothing from Goode as he enjoys Hollywood attention. Goode, they say, has the wealth and cultural influence to help them at a time when they need it most.

“They have families, they have children, they have mortgages to pay, and they spent a lot of their life working for B Bar,” said Luis Lugo, a former floor manager. “You’re the director of Tiger King and you own the Jane Hotel and you’re not a small mom and pop shop that’s struggling. You’re someone that has the financial resources to make a difference.”

“To have been profitable for so many years on the back of these people and not even say, ‘Hey, guys, here’s a couple thousand dollars’ seemed really unfair to me,” Lugo said.

Goode did not respond to multiple requests for comment for this story. The restaurant’s general manager, Aaron Perez, said he had no comment. 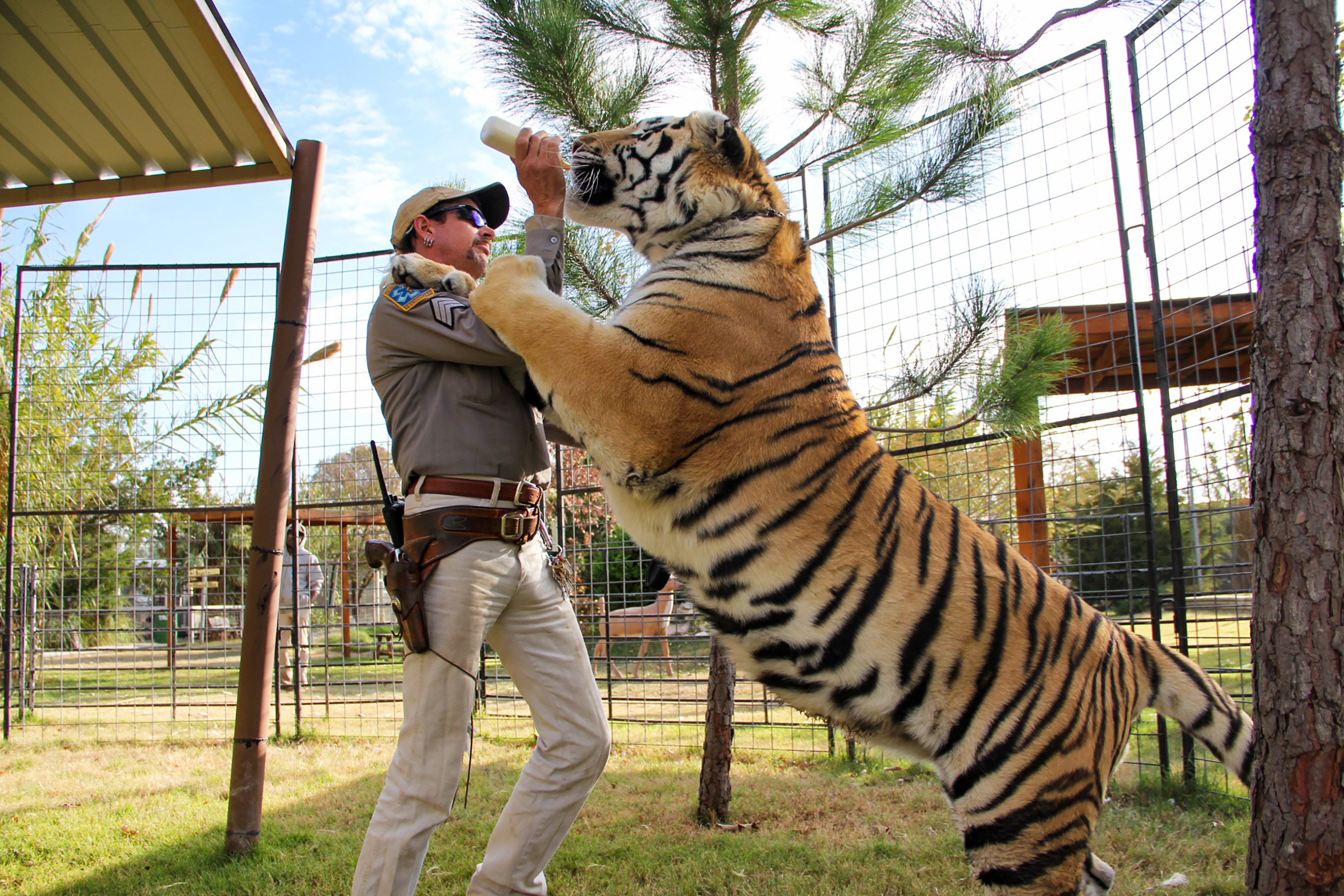 A still from Tiger King.

After rival restaurateur Danny Meyer laid off some 2,000 people, his Union Square Hospitality Group started a nonprofit to aid staff and to which Meyer donated his entire salary. (Meyer owns Union Square Cafe and Gramercy Tavern, among other restaurants, and founded the burger chain Shake Shack). Executives at the company also took a pay cut, Meyer’s restaurants sold gift cards to fundraise, and the group held an online auction that raised an additional $239,000. So far, more than half a million dollars in grants have been awarded to affected staff, a spokesperson told BuzzFeed News.

Other hospitality leaders in New York are also working to fundraise. Dozens of prominent restaurants and companies banded together to form a group called ROAR, which stands for Relief Opportunity for All Restaurants which raised $500,000 in one week for workers, according to a spokesperson.

“I think the entrepreneurial juices are starting to flow in terms of how organizations are creating revenue streams,” said Derek Sherman, director of New York City Hospitality Group, a professional industry group serving local restaurants (Sherman was speaking generally and not about Goode, specifically). “We’ve seen companies start GoFundMe campaigns and donate the food to their own staff and things of that nature.”

The NoHo Hospitality Group, which owns restaurants not far from B Bar, including Joe’s Pub and Lafayette, started a GoFundMe and sold gift cards that have so far raised more than $100,000 for their 1,200-person staff, a spokesperson said. Another GoFundMe started for two prominent and trendy Brooklyn restaurants, Olmsted and Maison Yaki, which have about the same staff as B Bar, has raised more than $80,000 after a social media campaign. In contrast, the GoFundMe started by the general manager of B Bar has raised just $1,500.

“I’m really worried about a lot of the cooks and the back of house staff. Some of the servers, too, have families and they have no income coming in and they have no checks coming in after the layoffs,” said one server who worked at B Bar for four years and who asked to remain anonymous in order to speak freely. “And here Eric Goode is the number one trending thing in the country. It just doesn’t feel right given the nature of everything that’s been going on. I would have expected him to at least pay those employees two weeks of paid time off.” 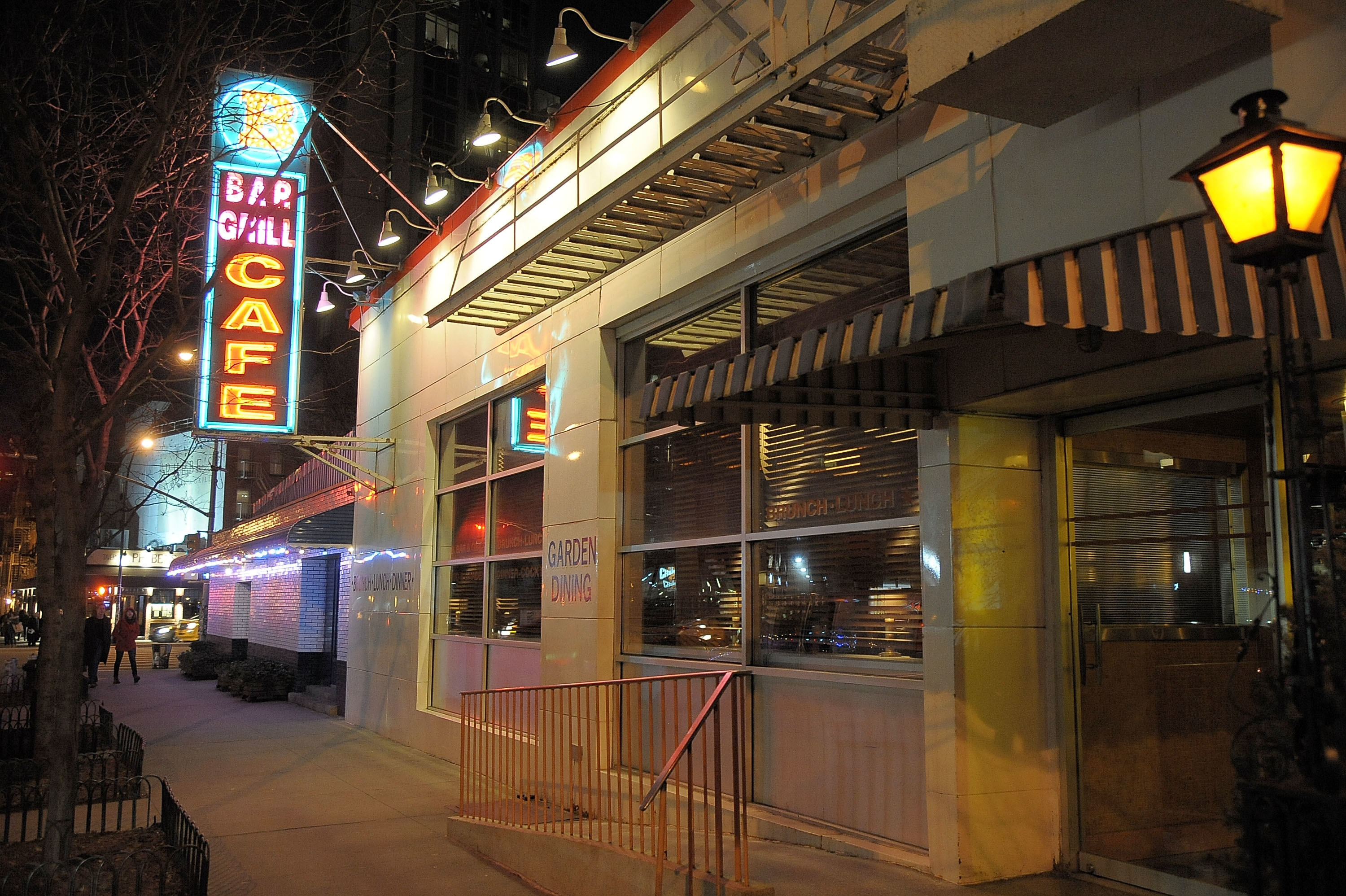 Lugo, the ex-floor manager, had written a letter on behalf of colleagues to Goode on March 23, roughly a week after B Bar ceased operations, asking for two weeks sick pay for all staffers. He thanked the Goode family for years of employment in an “unparalleled” work environment, but spoke of feeling “as if upper management has abandoned us in such a time of need.”

“While we understand this pandemic discriminates against nobody and is affecting all of us, we urge you to use your position of power and offer at least 2 weeks of sick pay to all your employees,” read the letter, which was signed, “Your team at B Bar and Grill.”

Staff heard nothing until three days later, when they all received letters from Goode formally laying them off. “Please know that we are deeply sorry to have to take this action and wish you and your families the very best during this difficult time,” Goode wrote in the letter to staff.

Lugo said he received one week of pay and was told in a staff group chat by two other managers, the executive chef, and the payroll manager they received the same one week of pay. Other staffers received nothing.

“Simply, they sent us home and they sent us an email saying we were dismissed,” said Vasquez, the chef. “Nothing. Just thrown out on the street.”

“It strikes me as unjust that I worked a long time for him and didn’t get anything in return,” said Eloy Aguilar, who worked for 25 years at B Bar as a line cook. “We need economic help, not just for me but also my other colleagues.” 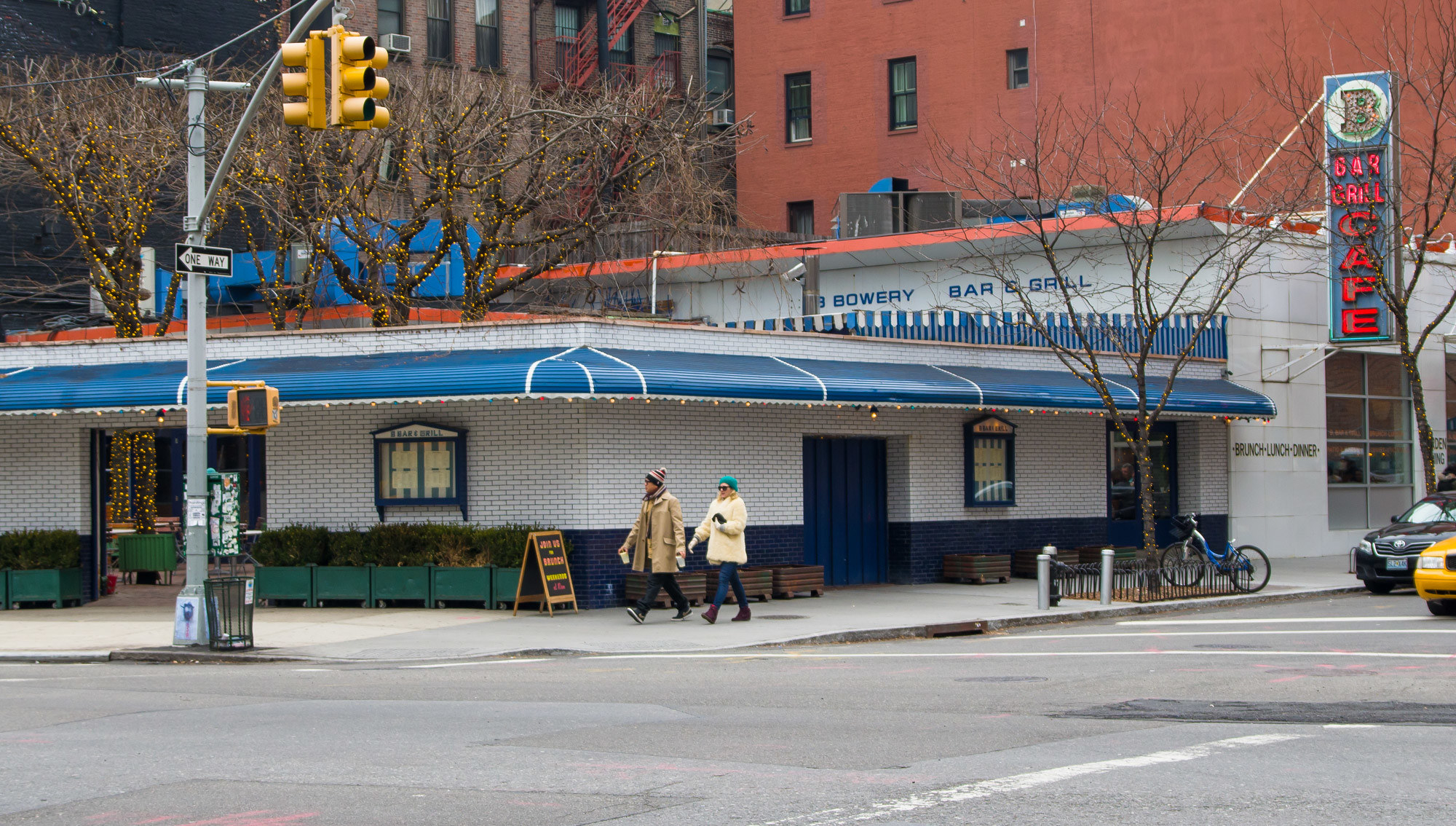 In his letter, Goode promised “to do what many in the hospitality industry are already doing and take immediate action with an appeal to our communities to help raise funds that will help our staff in the interim.” Goode promised more information, but more than two weeks later, the staffers said they have heard nothing apart from the GoFundMe.

“There’s only $1,500 in it and they’ve done nothing,” said the waiter. “The Goodes have set up no charities or fundraising for their employees.”

When Goode last year sold the B Bar site to developers, staff were told the restaurant would shut by the end of 2020, but were promised they would receive 90 days notice to begin looking for other work. Now, amid the coronavirus pandemic, it is unclear if the restaurant will reopen at all.

Vasquez, the longtime chef, told BuzzFeed News he has self-quarantined in his basement with a suspected case of the coronavirus for days. He is worried about his wife, two children, and mortgage. “I worked many years there,” he said. “I would like them to help me economically … not just to throw us in the street like that. That’s how I feel. It’s something terrible.”

Aguilar, the line cook, said he has watched a few episodes of Tiger King. He said he hopes other viewers “see [Goode] and that they think about the way that he’s treating us.”

A few days after laying off his staff, Goode told the New York Times in an interview promoting Tiger King that it was an “interesting time” for him to be mulling future film projects.

“I happen to be in one of the worst businesses that one can be in at this time, the hotel and restaurant business in New York City. Being that they’re all shut, with no date scheduled for an opening, it’s an interesting time for me to think about making films,” he said. “I’ve always liked filmmaking, and I did it in an ad hoc way, prior to this series. So maybe that’ll be a good career move in light of what’s happening today.”