Around 2007, an 18-year-old Australian first eyeballed American football, that creation most of the world finds plodding and overly helmeted. She found it in the suburbs of Melbourne. She suffered. 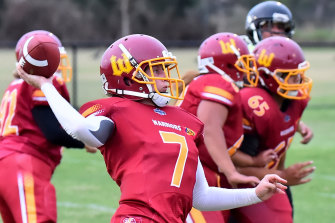 Heather Marini cut her teeth on the gridiron fields of Melbourne.

It remains the longest game she ever watched. "It was freezing," Heather Marini said. "There was a penalty called on every play," so thank goodness it lacked video review. "And there were no stands," so she stood there through the flying flags and the biting air, which meant this accomplished young athlete really must have liked the player who had invited her to watch. They had just begun dating.

Well, now. In that implausible way stories bud and flower, look at this: Whenever football resumes, it will find Marini standing on the sideline all game, game after game, by choice and by profession and by pioneering. In a sport hurriedly running out of firsts when it comes to women as coaches, the new Brown University quarterbacks coach Marini just became the first Division I female position coach. Let the air bite, but keep the flags minimal.

He said, "For me, it's already kind of routine."

And, "Anybody I think who does it, will feel the same way." 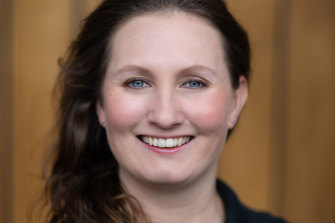 Heather Marini, who her boss expects to be a head coach one day.

It's a logical development within the Brown program after Marini spent a year as one of those assistants running around these days with the words "quality control" as part of their title. It's getting to be a welcomely humdrum development within football, in a fading winter during which the San Francisco 49ers reached the Super Bowl with a coaching staff that included Katie Sowers. It's getting to be a zany development only when considering the latitude and longitude at which Marini started out in life and toward jockdom.

After all, American football conversations seldom include the words "international date line."

"You know, it was so interesting because I actually was talking to my husband about it," said Marini, 30. "We kind of agreed it wasn't so much about being the first female coach. It was about me getting to coach, and on this side of the international date line."

Yes, same dude from before.

Her zigzagging path to X's and O's begins in the world's sportiest land with the father of her husband, who used to do as do few Australians and watch the NFL when it appeared on Australian cable and when few Australians had cable. It includes the 21st-century detail that her husband, Kieren, who works in cancer research at the University of California at San Francisco, googled the sport as a teenager and found a local league. Later, at something American teens might dub a "prom" but Australian teens call a "formal," Heather and Kieren met through friends of friends.

By the time both reached Monash University in Melbourne, Heather already had lived a childhood rich in that art sometimes lost in American parenting methods: sport-diversifying. In a ravenous manner that calls to mind Ashleigh Barty – the Australian tennis player who left the sport, went to high-level cricket, returned and reached No. 1 – Marini played netball, swimming, tennis, running, badminton and soccer. (She would play American football later, in adulthood.)

All along, she excelled at foreseeing. "Being able to anticipate," she said, "was one of my biggest strengths." In netball, the sport of her highest accomplishment (state-title level), she said, "I'd see where the ball was going to go before it could get there." Coaches kept telling her, "I wish you were just a little more athletic because you understand the game so well." Her high school yearbooks depicted her as a future teacher. Her intrigue grew with "how the body moves in different ways." 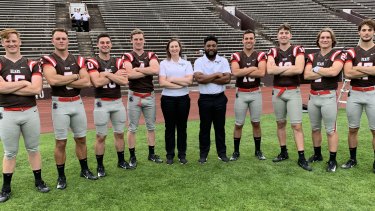 Marini with her charges at Brown.

In football, that means, "How can I make your receiver faster out of the stance?" Marini said. "How can I make the quarterback throw just a little bit more effectively? How can I help a lineman get more efficient?"

She took an internship at Oregon State in 2010 in strength and conditioning. She helped coach the Monash Warriors club team and helped coach, as did Kieren, the eventual Georgia Tech and Denver Broncos defensive end Adam Gotsis. She helped coach, as did Kieren, the Monash Warriors club, where both spouses coached Adam Gotsis, who would play defensive end for Georgia Tech and the Denver Broncos. She quarterbacked the Warriors' women's team when that got birthed. In Orlando, Florida, a few years back at an inclusion program run by the NFL, Perry spoke, and Marini listened. They did not meet.

Yet Perry, the Brown coach, already had hired and worked with other female coaches, Phoebe Schecter and Sue Lizotte, so Marini began contacting him with persistence. She began at Brown in August. As Perry points out, a batch of outstanding college coaches – and they include David Cutcliffe, Paul Johnson, Mike Leach and Bill Clark – did not play college football, making gender irrelevant as an obstacle to coaching.

But Marini also had played the game and so, Brown quarterback EJ Perry said, "I was dealing with injuries throughout the season" – a shoulder, a leg – and "she obviously having played the game was able to describe to me the things she went through."

She coached well beyond that, of course. "I sat down with her," Perry said, "and we went through all of my straight drops [dropbacks], which is an area that I struggled with." They pinpointed his "issue with stepping in the bucket," as goes football terminology, meaning, "I tend to fall away toward the left side," requiring a focus upon, "Eyes to the middle throughout the entire drop."

"I'm excited to learn even more from her" once life resumes, the first-team all-Ivy League and former Boston College quarterback said. "We're going to try to go faster and faster."

On a wider front, Marini specialised in Brown's Thursday habit of "self-scouting," Perry said. "There were things Heather was bringing to the table those Thursdays that in 10 years of college coaching would be unique to me." Those included "a study on how many practice reps we did of third and long and comparing that to how many third-and-long snaps actually happen in the course of a season."

Here she is, in this culture where third and long is a national problem requiring solving, capable of speaking about American football versus other athletic pursuits. "To me, I think football is the best bits of all those sports rolled into one. We get the spectacular catch like in Australian rules football [where] we call them 'speckies.' " She went on to cite football's incorporation of agility as in basketball, physicality as in rugby, endurance as in soccer. A tennis player once said to her, "But football's so slow," with breaks between the action, to which Marini said, "You're a tennis player!"

As a further detail both curious and immaterial, she's also a female person. "Yeah I think at the end of the day, as many women become involved, the less a microscope is going to be on us," she said. "I just happen to be the first one. That means there'll be a second and a third and a fourth."