A TikTok star has gained legions of fans online after launching a hilarious ‘Deaf Kardashian series’ as she acts out scenes from the reality show with ‘sassy’ sign language.

Scarlet May, 19, from Washington DC, has gained over 484,000 followers on the video sharing platform, and wracked up millions of views on her hilarious Deaf Kardashian series.

In the clips, the Tiktok user dresses up as the famous sisters and signs along to some of the most famous scenes from the Keeping Up with the Kardashians reality show.

The videos have had social media users in hysterics, with one excited fan commenting: ‘I’m obsessed with your Kardashian videos, they’re so much more entertaining than the real show lmao.’ 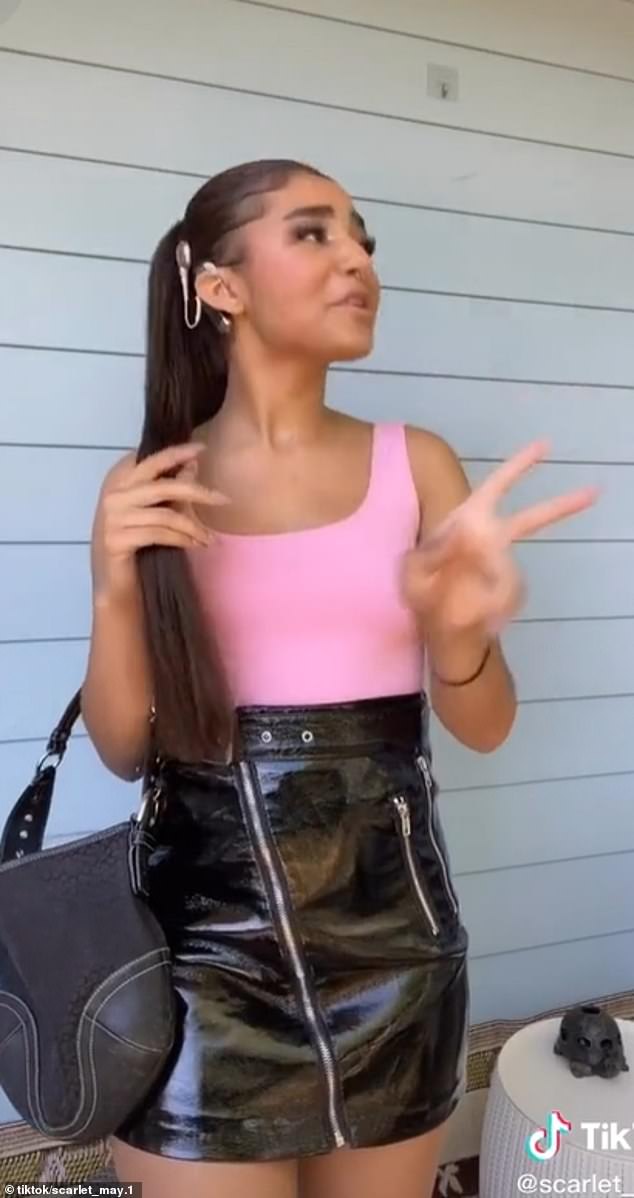 Scarlet May, 19, from Washington DC, has gained over 484,000 followers on the video sharing platform, and wracked up millions of views on her hilarious Deaf Kardashian series

Scarlet recently revealed on her YouTube channel that she began losing her hearing when she was just three-years-old, although she is yet to reveal the health reason why, and she quickly learnt to sign.

The teen, who attends university in the US, began posting ‘Deaf Kardashians’ a few months ago, and often often plays multiple sisters in each TikTok video.

She opts for quick, Kardashian-style outfit changes while rapidly signing away to some of the programme’s most iconic scenes.

The teenager has quickly gained thousands of fans, with over 1.3 million users watching a recent compilation of some of the most popular Kardashian scenes. 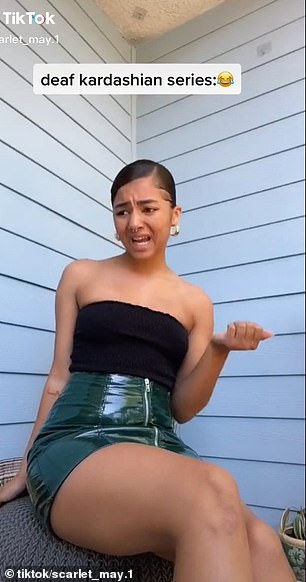 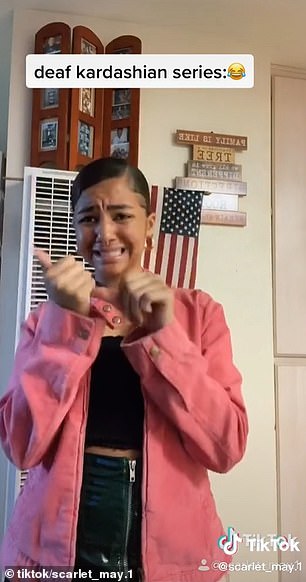 The teenager, who is currently at university in the US, often plays several different Kardashian sisters in the same videos, where she acts out some of the reality show’s most famous scenes

There are about 37.5 million deaf or hard-of-hearing people in the US and American Sign Language (ASL) is the third most used language in the country.

ASL is a complete language that uses signs made by moving the hands combined with facial expressions and body postures.

It is the primary language of many North Americans who are deaf and is one of many communications options for people who are deaf or hard-of-hearing.

British Sign Language (BSL) is used in place of ASL in the UK.

BSL users utilize both hands for the alphabet while ASL users only utilize one.

One delighted fan commented: ‘You have the most sassiest ASL I have ever seen! I love it.’

Meanwhile another wrote: ‘You need your own show!! I love this.’

‘You are so elegant and classy,’ a third added, ‘I want to be more like you, but my movement aren’t smooth all.’

One commented: ‘I’m obsessed with your Kardashian videos, they’re so much more entertaining than the real show.’ 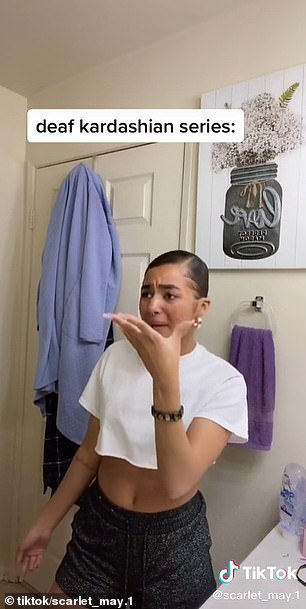 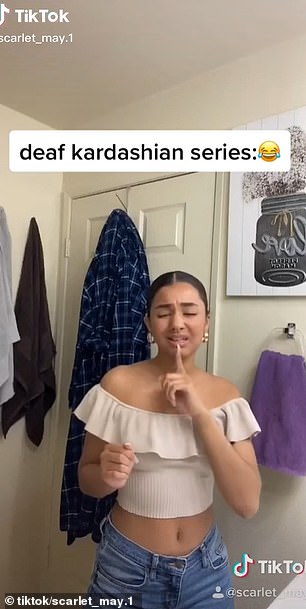 The teenager has wracked up millions of views on the video sharing platform and gained legions of fans for the hilarious series (pictured left and right, filming in her bathroom and playing different characters during the series) 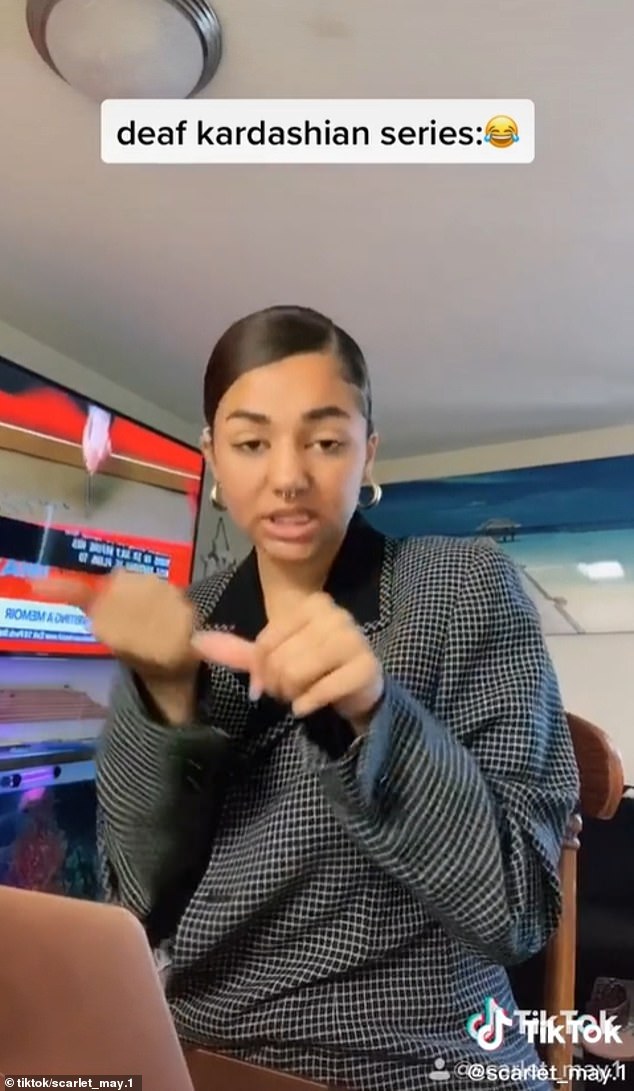 Scarlet often dons different outfits to play multiple characters in one video (pictured, signing along as Kris Jenner during one scene)

Others said they hoped Scarlet’s hilarious series would catch the attention the famous sisters, with one commenting: ‘I’m waiting for the Kardashians to react to you. This series is so good.’

As well as the hilarious series,  the teenager recently shared the importance of closed captioning on the site.

She posted: ‘I don’t think you actually understand how we feel to watch millions of videos and not have one idea what you guys are saying because you simply decided to not add closed captioning.

‘Imagine if I decided to make this video and not add closed captioning, you hearing people would be completely left out and lost.’ 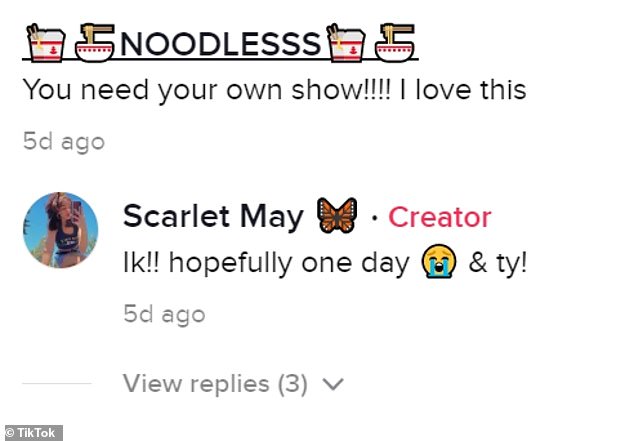 Social media users have heaped praise on the teenager, with many saying they hope her hilarious series will catch the eye of the Kardashian sisters