Sydney’s biggest toll operator will not freeze price increases during the coronavirus pandemic, arguing the revenue is funding projects that are keeping people employed during the crisis.

Prices on a handful of Sydney toll roads are set to increase from Wednesday, prompting calls from the NSW opposition for a stay on the indexed mark-up amid the economic downturn. 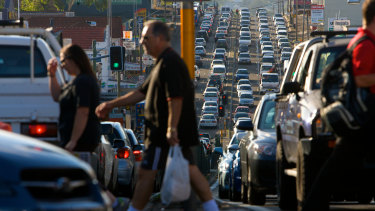 Opposition roads spokesman John Graham said the government needed to work with toll operators to freeze price increases for the quarter, and possibly beyond.

“NSW is in a precarious economic position right now and we need to look at different ways to ease the financial burden on families and businesses,” Mr Graham said.

Transurban, which owns all four toll roads that are set to increase, is refusing to budge on its pricing on the Cross City Tunnel, Eastern Distributor, M2 and Lane Cove Tunnel.

A spokesman for the company said the revenue generated from the price increases was being funnelled into its big infrastructure projects in the state, including NorthConnex and WestConnex.

“Tolls allow us to invest billions of dollars into new road projects, which have created more than 10,000 local jobs and none of them have stopped during this crisis,” the spokesman said. 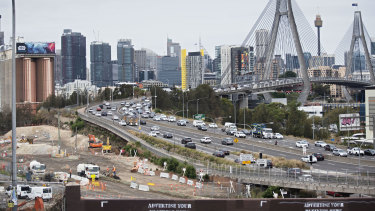 The WestConnex tollroad is not due to be finished until 2023.Credit:Christopher Pearce

The Herald understands Transurban is dealing with big shortfalls on projected traffic figures amid the coronavirus crisis that’s caused thousands of job losses and kept many of those still in work at home.

The company is also grappling with increased construction costs as interstate and overseas travel is cut down while strict social distancing measures are also being implemented on its work sites.

Transurban is expected to make an announcement on Wednesday outlining the severe impact the COVID-19 pandemic has had on the company.

Asked whether it could intervene to assist Sydney motorists, the NSW government said the price escalation on the state’s toll roads were “set and legally binding”.

“Under individual contracts with the NSW Government, motorway companies have the right to increase prices,” a Transport for NSW spokesman said.

“This funding approach has reduced the government contribution required for motorways and the overall burden on taxpayers, freeing up capacity to invest in other essential services such as hospitals, schools and public transport.

"Private toll roads are critical to keeping vehicles, including freight, moving across the state.”

Meanwhile, the Harbour Bridge and Harbour Tunnel tolls have not been increased since 2009. Transurban says it has suspended its debt collection activity during the health crisis.

“For anyone who needs help or more time to pay their toll accounts in these difficult times, we have financial support available through Linkt Assist," a Transurban spokesman said.