Toyota’s 6ft 10inch basketball throwing robot has been improved and can now run around the court and pick up balls itself before shooting them.

In a three-point shot contest, the machine succeeded in making 11 of its attempts.

Cue 4 was brought out in an All Stars jersey to shoot before Levanga’s B league All-Stars game in Hokkaido. 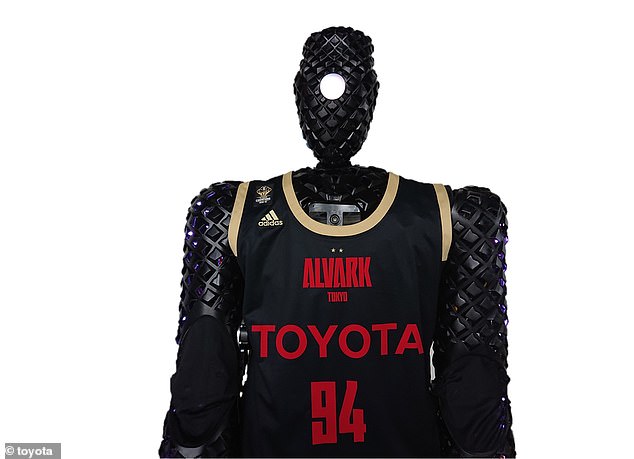 The robot, made by the Japanese company, is the latest CUE iteration, building on the successes of its predecessor, CUE 3.

But it had to be fed basketballs as it was unable to grip the ball and cumbersome wires meant it had to be stationary and could not move.

Advancements made to the robot allowed it to grip the balls itself with a new hand and has a carbon fibre frame comprised of 15 joints and 23 motor shafts.

The engineers at Toyota also made CUE 4 lean slightly forward to improve its balance and enable the robot to move around easier.

CUE 3’s power cables have been replaced with a small and powerful motor and the AI refined to improve the potency of the shooting mechanism.

Project leader Tomohiro Nomi said: ‘Since we were given the chance to continue our development of CUE as part of our work, instead of just in our spare time, we wanted to show what we could do with manufacturing to give people some excitement and exhilaration (what’s called waku-doki in Japanese).

HOW DOES THE TOYOTA BASKETBALL ROBOT SHOOT?

It can shoot from the centre circle by computing a 3D image of the basket.

It calculate its relative distance using vision and radar, and then using algorithms.

This transform the data into instructions for its arm, knee and torso motors and sensors.

Cue 3 then adjusts motors inside its arm and knees to give the shot the right angle and propulsion for a swish.

‘I shared my ideas with the Levanga team, and the staff and players unanimously agreed to accept CUE as one of their own.

‘We also wanted to deliver even more impressive performance to repay the Alvark Tokyo team, who have provided us with support and opportunities up to now, and to our suppliers, who have supported the project and developed special parts for us.’

The robot uses a variety of sensors to calculate the correct angle and force of a shot and uses motors to accurately replicate the same motion every time.

Toyota, a Japanese company, opted to complete 2,020 for its Guinness World Record last year to honour the upcoming 2020 Olympic Games, due to be held in Tokyo.

Toyota’s robot makes a three-dimensional image of where the basket is using sensors on its torso.

It then adjusts motors inside its arm and knees to give the shot the right angle and propulsion for a swish.

The company plays down how the technology might prove useful. It’s more about boosting morale among engineers, making them open to ideas and challenges.

In making the robot’s outer covering something like that of an armadillo, the engineers said they were just trying to avoid the white metallic look often seen on robots.

Toyota has previously shown off various robots, including one that played a violin.

Experts say robots that can mimic human movements, even doing them better, could prove useful in various ways, including picking crops, making deliveries, and working in factories and warehouses.