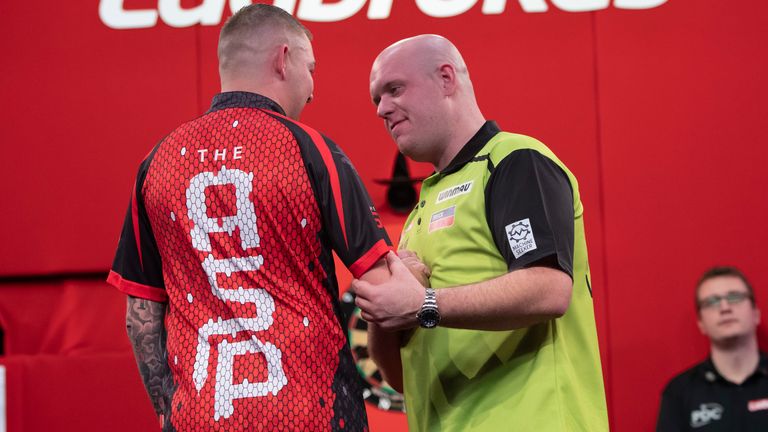 Michael van Gerwen ended Nathan Aspinall’s defence of his UK Open title on a blockbuster opening day of darts at Butlins in Minehead.

The world No 1, a two-time champion of the ‘FA Cup of Darts’, is without a title so far in 2020, and in the open draw format was handed a blockbuster fourth round tie against The Asp, the defending champion who triumphed on the Main Stage 12 months ago.

Aspinall had also claimed the MVG scalp in the Premier League a couple of weeks ago, but it wasn’t to be for the Stockport thrower as Van Gerwen chalked up a 105 average on his way to a 10-8 victory and a meeting with Jason Lowe in the last 32.

Lowe, who won his Tour card in January at Q-School, chalked up three wins to MVG’s one, beating Cody Harris and Jonathan Worsley before a sensational burst accounted for former UK Open champion Adrian Lewis in Friday night’s fourth round.

Wright advances to play world No 11 Ian White, while Gary Anderson, the 2018 champion, had to hold off a fierce comeback from Steve Beaton before eventually sealing a 10-7 win over the Bronzed Adonis.

Gerwyn Price, Daryl Gurney and two-time champion James Wade were also among the big names to safely make it through their first round matches.

Two-time Grand Slam champion Price, a semi-finalist last year in Minehead and the runner-up in 2017, smashed in a 104 average to account for Danny Noppert, while Wade was a 10-5 winner over John Henderson and Gurney accounted for Keegan Brown in a last-leg decider.

Rob Cross and Michael Smith advanced to a fifth-round showdown on Saturday afternoon, Smith powering his way past James Wilson while Voltage battled his way past Holland’s Niels Zonneveld.

World No 10 Dave Chisnall was the biggest name to fall, although Chizzy’s form has deserted him of late and a draw against Ireland’s William O’Connor was not what he would have wanted. The Magpie came through 10-8 and will face Gurney in the next round. 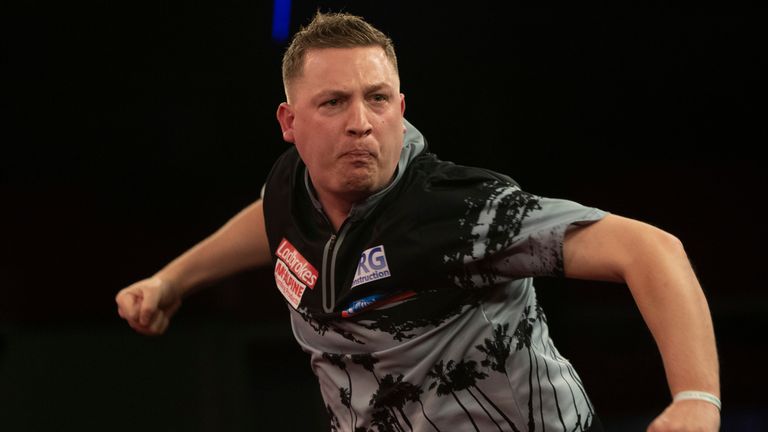 Stephen Bunting warmed up for his outing as a Premier League Challenger in Liverpool next Thursday with a 10-9 win over Vincent van der Voort while Chris Dobey edged out Krzysztof Ratajski in a classy affair. However Luke Humphries failed to billed on his history-making Premier League moment.

Less than 24 hours after he accounted for Gary Anderson, becoming the first Challenger to win a Premier League match, he was beaten in the fourth round by Andy Boulton after beating Kyle Anderson earlier in the day.

An epic day of arrows had got underway at 11am, with the Riley’s qualifiers and first of the Tour card holders getting the action going, and there was early disappointment for Fallon Sherrock and Lisa Ashton, who suffered first round exits.

Sherrock’s conquerer Kyle McKinstry shared the endurance honours for the opening day. The Village Man from Northern Ireland followed up his win over the Queen of the Palace with three more victories to make the last 32, beating Jason Heaver, Stephen Burton and Bradley Brooks.

Alan Tabern, the 2006 semi-finalist, was the other man to rack up four wins. The Saint started his day with a 6-2 win over teenage sensation Keane Barry and added the scalps of Steve Brown, Steve Lennon and Richard North on his way to a date with Bunting in the fifth round.

Martin Atkins was the only other man to enter at the first-round stage to be left standing, and he was lucky enough to secure a bye into the fifth round following the late withdrawal of Max Hopp, who was forced to pull out through illness.