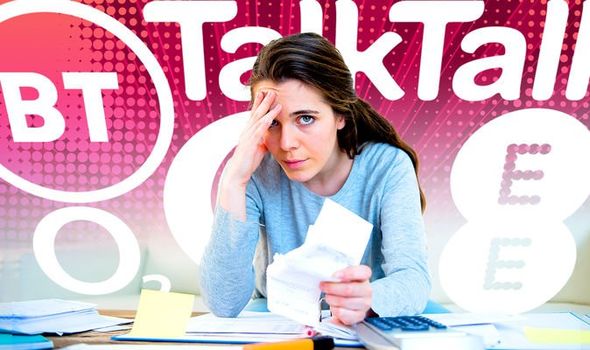 Your monthly bills are about to skyrocket. The Office of National Statistics (ONS) has published the latest inflation figures for the UK, which are used by some of the biggest mobile networks and broadband and television companies to calculate their annual price rises for existing customers. Spiralling inflation could force some customers to pay almost 10 percent extra each month – making it more important than ever before to take advantage of deals and discounts when they’re available. According to research from Ofcom, around 40 percent of all broadband customers are out of contract, if you’re one of them, you should check out our rundown of the best broadband deals to secure better monthly price (or faster speeds for the same price). The record-breaking price rises from BT, Vodafone, Plusnet, EE, TalkTalk and others follow confirmation from Virgin Media that the average customer on its fibre broadband plans will see bills rise by £4.70 a month. That’s around £56.40 extra to be paid each year.

With average download speeds between 65-73.5Mbps, this isn’t the fastest connection on the list, but it’s a phenomenal price. Quieter households without four people streaming boxsets in crisp 4K quality in different rooms should have no trouble with Superfast 2, which arrives with a guaranteed speed of 58.9 Mbps.

Plusnet has dropped its £10 activation fee on this plan – and added a £70 Gift Card to its popular Fibre Extra plan. In terms of the broadband bundle, you’ll get acceptable 66Mbps speeds and unlimited usage. The 18-month minimum contract isn’t the shortest on this list, but it won’t tie you in as long as some providers, like BT or Vodafone above.

If you’re looking to drop your monthly bills and keep a respectable download speed, you’ll struggle to find better than this M100 deal from Virgin Media’s January Sale. With the average broadband speed in the UK sitting around 70Mbps, you’ll be able to binge boxsets, download apps and make video calls without a stutter on this connection. Virgin Media has also waived its pricey set-up fee, which usually costs between £30 and £35. Brilliant!