Temperatures soared over much of Antarctica this past summer, prompting researchers to declare the first heatwave ever recorded at Australia's Casey station.

While the Antarctic Peninsula is well known to be among the fastest warming regions of the planet because of climate change, the continent's east had been relatively sheltered from the global heating. 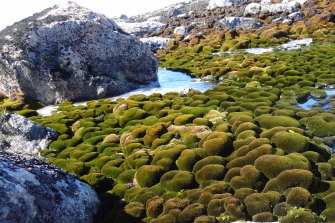 In a paper published on Tuesday in Global Change Biology, scientists from the University of Wollongong (UOW), Australian Antarctic Division, University of Tasmania and University of Santiago, Chile, identified periods of very unusual warmth that affected Antarctica’s ecosystems.

While record Antarctic heat in February made headlines around the world, the first signs of the heatwave actually appeared in the east of the continent several weeks earlier.

“In the 31-year record for Casey, this maximum is 6.9 degrees higher than the mean maximum temperature for the station, while the minimum is 0.2 degrees higher.”

Professor Robinson said Chilean counterparts studying the moss of King George Island also registered the spike in temperatures. While a typical December-February period, such as a year earlier, would see the mercury rising above 14 degrees for 3 per cent of the year, this past summer saw that proportion there jump to 14 per cent. 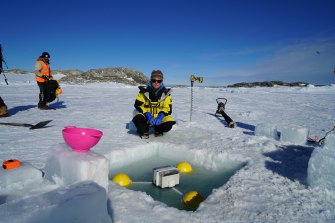 A tide gauge is deployed in an ice hole at Casey research station, the site of an Antarctic “heatwave” earlier this year.Credit:Imojen Pearce/AAD

Those readings were "not very Antarctic", she said, adding that for areas where the temperature usually remained below zero, "it's very worrying" since many plants such as mosses and animals have adapted to the normally frigid conditions.

The heatwave definition was based on a similar measure used in Australia of three days and nights of temperatures in the top 10 per cent of readings for that date.

The success of global efforts to reduced ozone-depleting chlorofluorocarbon chemicals (CFCs) was one of the reasons for this summer's exceptional warmth along with the background climate warming.

As the ozone hole over Antarctica has closed, the strong westerly winds have abated, allowing the rising temperatures to reach regions – such as Casey station – that had previously been shielded, Professor Robinson said.

The past summer's heatwave "is probably a harbinger of the future, as we have stopped production of CFCs", she said. "A lot people think of Antarctic as pristine and protected but climate change gets everywhere, so it's not protected."