A horrifying slow motion video shows the incredible trajectory of a sneeze that may be carrying the coronavirus – up to 27 feet away.

US scientists filmed a clip of a healthy person during a violent exhalation, slowed down from 25 seconds to a minute and a half.

They found that found viral droplets expelled in coughs and sneezes can travel in a moist, warm atmosphere at speeds of between 33 and 100 feet per second.

This creates an infectious and ‘turbulent’ gas cloud capable of reaching somewhere between 23 feet to 27 feet (seven metres to eight metres) away.

A moist and warm atmosphere within the turbulent gas cloud allows the contained droplets to evade evaporation for much longer than usual.

The study suggests the UK government’s coronavirus social distancing limit – 2 metres, or 6.5 feet – is at least four times too short if sneezing is taken into account. 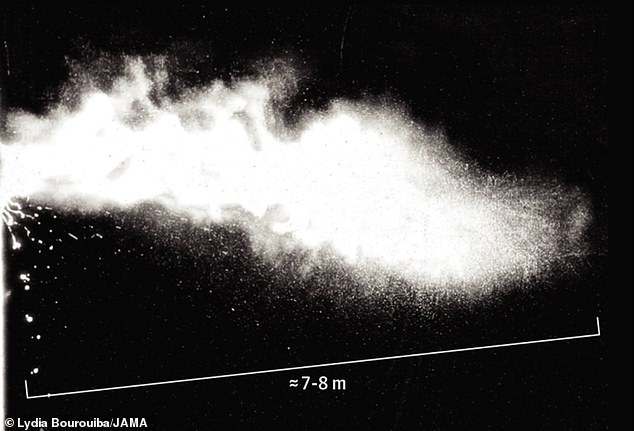 Peak exhalation speeds can reach up to 33 to 100 feet per second, creating a cloud that can span approximately 23 to 27 feet (7-8 metres)

Writing in the Journal of the American Medical Association (JAMA), Professor Bourouiba says today’s social distancing measures are based on outdated models.

The virus, called COVID-19, is transmitted from person to person via droplets when an infected person breathes out, coughs or sneezes.

This is because they do not account for the possibility of a hot and moist gas cloud, which is capable of sustaining the viral droplets for longer distances.

‘Although such social distancing strategies are critical in the current time of pandemic, it may seem surprising that the current understanding of the routes of host-to-host transmission in respiratory infectious diseases are predicated on a model of disease transmission developed in the 1930s that, by modern standards, seems overly simplified,’ she says.

‘Implementing public health recommendations based on these older models may limit the effectiveness of the proposed interventions.

‘These distances are based on estimates of range that have not considered the possible presence of a high-momentum cloud carrying the droplets long distances.’

Droplets that settle along the trajectory of a sneeze can contaminate surfaces, while the rest remain trapped and clustered in the moving cloud.

Eventually the ‘turbulent gas cloud’ loses momentum and the remaining droplets within the cloud evaporate. 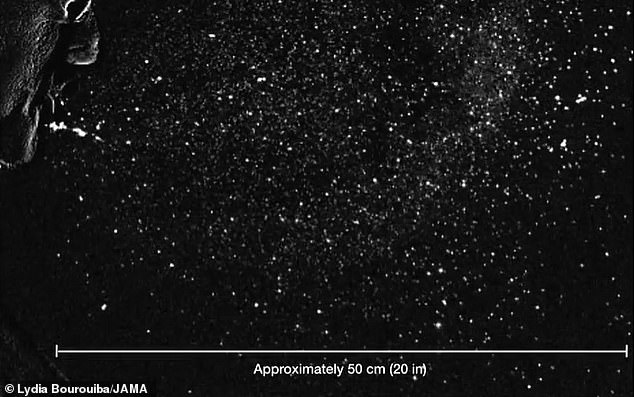 Close-up view of emission within 20 inches from a healthy person during a sneeze, originally recorded at 2,000 frames per second

The rate at which these droplets eventually evaporate depends on their size, the speed of the gas cloud and ambient environment conditions such as temperature and humidity.

Under higher temperatures, the lifetime of a droplet could be extended by up to 1,000 – or from a fraction of a second to several minutes.

But even after evaporation, ‘droplet nuclei’ may stay suspended in the air for hours, getting caught in airflows from ventilation or air conditioning systems, such as in supermarkets or even hospitals. 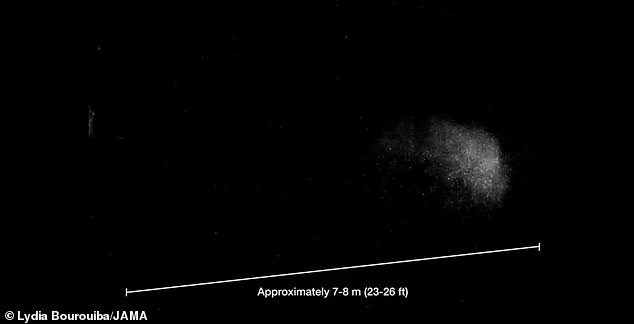 Wide-angle view of emission within 26 feet (8 metres) during their violent exhalation. The study found that a moist and warm atmosphere in the ‘gas cloud’ allows the droplets to evade evaporation for longer

Viral particles could be found in the ventilation systems in hospital rooms of patients with COVID-19, according to a report from China earlier this year.

‘Given the turbulent puff cloud dynamic model, recommendations for separations of three feet to six feet (one metre to two metres) may underestimate the distance, timescale, and persistence over which the cloud and its pathogenic payload travel, thus generating an underappreciated potential exposure range for a healthcare worker,’ she said.

‘For these and other reasons, wearing of appropriate personal protection equipment is vitally important for health care workers caring for patients who may be infected, even if they are farther than six feet away from a patient.’

Outside of hospitals, Brits are now finding themselves in close quarters with others on a daily basis in places liked cramped supermarkets that don’t accommodate the recommended social distancing requirements.

The UK government says COVID-19 spreads through close sustained contact with someone who has the virus, such as being within 2 metres of someone for longer than 15 minutes.