Prince William and Kate Middleton are parents to three young children who delight royal fans every we see them out and about. Prince George, Princess Charlotte, and Prince Louis have done everything from appearances on the royal balcony to play dates during polo matches to walking the red carpet with their parents. Something fans aren’t treated to very often though is actually hearing them speak.

Well, now you’re in luck because we compiled a few adorable videos of each time were heard the Cambridge kiddos utter a word, or two, or full sentences. 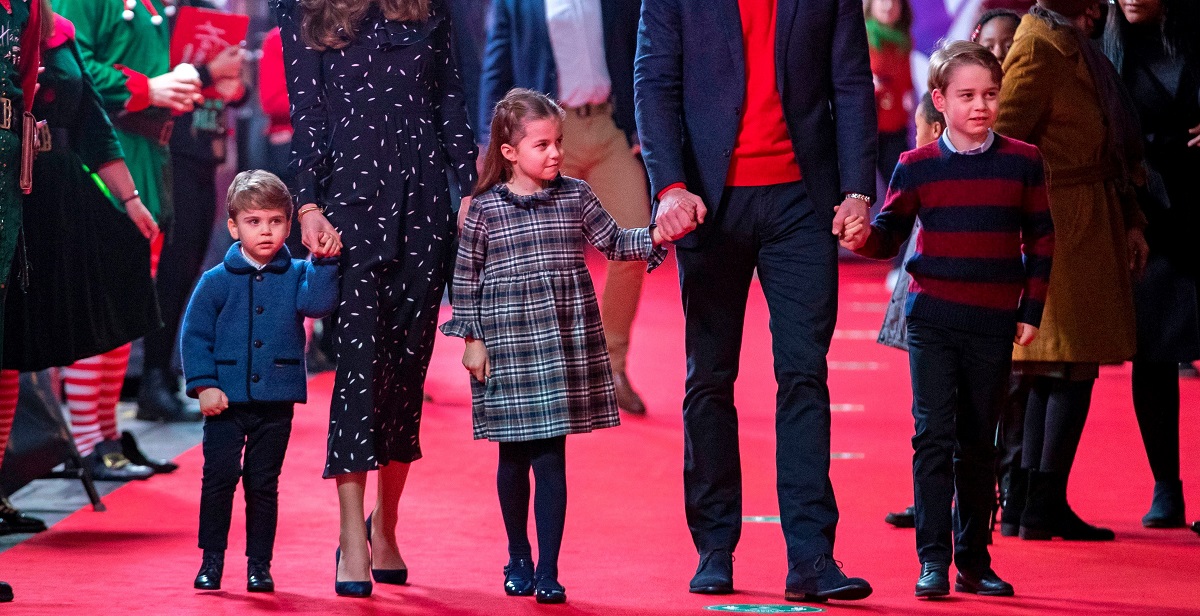 The very first time the public heard William and Kate’s only daughter, Princess Charlotte, talk is when she and George were on tour with their parents in Canada in 2016. During a children’s party on the grounds of Government House in Victoria, a then 16-month-old Charlotte was excited to see a display of balloons and when she ran over to them exclaimed “pop!”

That day, she was also heard referring to William “Da da.”

Charlotte gets cheeky with photographers at Prince Louis’ christening

Another time the little princess was heard speaking on camera was at her brother Prince Louis’ christening.

On July 9, 2018, the royals gathered at St. James Palace for Louis’ baptism. While the ceremony was private, photographers were outside the chapel hoping to get a glimpse of the Cambridge family and they did but Charlotte was too happy they were there.

When she saw the paparazzi snapping pictures the little princess made it a point to tell them they were not invited to her sibling’s christening. As she walked by the photogs and while holding her dad’s hand, Charlotte turned to those taking photos and said: “You’re not coming.” She then stared them down until she was out of view. Prince William did his best to hold in his laughter following his daughter’s remark.

Royal fans had already heard Charlotte speak a couple of times before they heard from her big brother. But everyone got to hear what the future king sounds like in 2019 when the Duke and Duchess of Cambridge shared a video of their children playing in the RHS Back to Nature Garden at the Chelsea Flower Show.

The space was co-designed by their mother and when William asked his son what rating he would give the garden out of 10, Prince George said “20!” The duke then started laughing and replied: “That’s pretty good, I think mummy’s done well!”

Charlotte makes a brief appearance in the video as well and is heard saying “yeah” in response to her dad calling her.

The only Cambridge child fans hadn’t heard from was Prince Louis. But that changed in October 2020, when the duke and duchess shared a clip on social media of each one of their kiddos taking turns asking Sir David Attenborough a question.

First George asks: “Hello David Attenborough, what animal do you think will become extinct next?”

His sister followed that up with: “Hello David Attenborough, I like spiders. Do you like spiders too?”

Then it was Prince Louis’ turn and he stole the show with his question: “What animal do you like?”