They stand metres apart, unable to touch or console each other, self-isolating among the headstones as a minister pays tribute to the life of their loved one.

Travis Trewarne and his family held a graveside service last Thursday for his 101-year-old grandmother Thelma Aujard, who died from pneumonia at an aged care home in Ashburton in Melbourne's eastern suburbs on March 12. 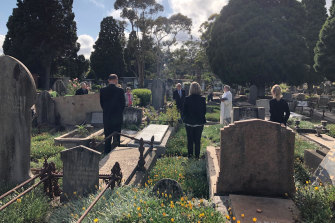 They had trouble hiring a minister and had to move locations twice after a church and event centre closed, the second time only a few days before the service.

Once they accounted for four pallbearers and the minister, that left only five family members at the graveside, each of whom had to abide by the new four-square-metres-per-person rule.

About another 20 family members stood around 20 metres back, all spaced apart, making it hard to hear the minister.

Mrs Aujard’s friends from the Burwood retirement village, where the once extremely social woman had lived, were unable to attend at all due to age-related health risks. 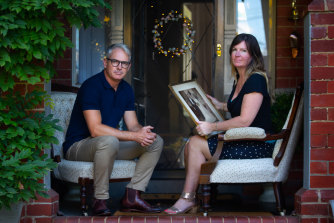 “We couldn't really comfort each other, that sense of intimacy at a time like that, it was just gone,” Mr Trewarne said.

As soon as the service ended they went separately to their cars, with no wake to follow.

The family is chatting on the phone and via social media, but for Mr Trewarne it’s not the same as face-to-face contact and is making the grieving process more difficult.

“She would have wanted something befitting of how she saw herself in this world,” he said.

Some other families are turning to technology to help them mourn their relatives and find closure.

Sarah Holland-Batt threw her father, Tony, a virtual funeral on Tuesday night, alone in her Brisbane study surrounded by nothing but books.

Her mother, Jenny, is immuno -compromised after chemotherapy last year for leukemia, so they decided they couldn’t even risk a small service. 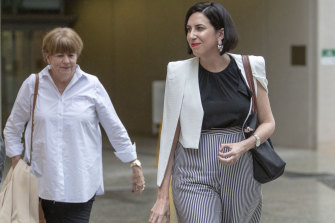 Sarah Holland-Batt (right) and her mother Jenny in 2019. Due to social distancing the family had a virtual funeral for Sarah’s father Tony.Credit:AAP

“The whole thing about funerals is you want them to have a sense of decorum and marking the occasion,” Ms Holland-Batt said.

“I was quite keen to preserve that and that’s when I thought of a video.”

They both recorded eulogies in their homes and an Anglican priest filmed himself giving a blessing and singing a psalm from a 13th century church in Norwich, England. 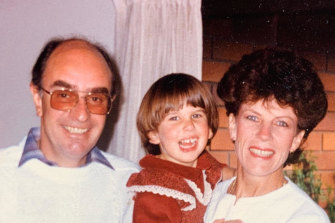 A photo of Sarah Holland-Batt as a child, with her mother and father, which was used in the funeral service video.

The 82-year-old, who had Parkinson's disease, died from pneumonia at a Gold Coast nursing home on March 7.

They sent a link to the film to his friends and family around the world and suggested they watch it at the same time, which most did.

Ms Holland-Batt, a writer and associate professor at University of Queensland, said they were initially confused and worried about how it would turn out.

“But the response was just so, so positive,” she said. “It did feel like we all gathered together, just not physically.”

The Australian Funeral Directors Association says there has been an increase in requests for live streamed services and burials and cremations without ceremonies.

Its chief executive, Dale Gilson, said parents who had lost children could not embrace, while desperate mourners were showing up at services that had reached the 10 person limit, pretending they were visiting other graves.

Clinical psychologist Kim Felmingham said it was important for mourners to connect to their loved ones using technology if it was accessible.

She said not being able to hold a funeral or say goodbye to the dying at their bedside were risk factors for complicated grief, where the bereaved were not able to move on with their lives.

Professor Felmingham recommends mourners seek professional help if they are struggling with the grieving process due to social distancing.

She suggests finding other ways of saying goodbye, such as writing a letter, and to be gentle with themselves.

“You’ve had significant loss in an awful situation. It makes perfect sense you are going to be in distress.”