It is the biggest killer in Australia's recorded history, and one of the biggest pandemics the world has ever seen. But a century later there is scant record of it, and few statues or markers.

The fight against the Spanish flu in 1919 now seems a silent, forgotten battle. Very few Australians remain who can recall it in their living memory. 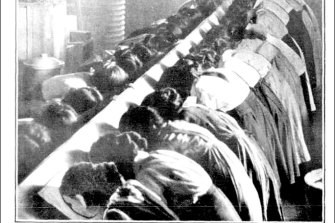 Female employees at Kodak’s Abbotsford factory use an inhalatorium – meant to clear the lungs with sulphur – during the Spanish flu outbreak in February 1919.Credit:The Australasian

Today, in the midst of the global coronavirus pandemic, there are some important lessons in how authorities in Victoria responded to the Spanish flu. And some serious warnings to heed.

The strategy was fairly similar when the virus hit Australian shores in January 1919: quarantine anyone from overseas who was thought to have been exposed, stop foreign visitors from entering, isolate infected people at home, and introduce mandatory reporting of anyone with the illness. 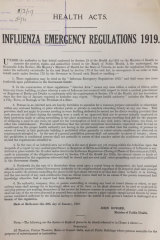 The condition was first referred to as "le grippe" after it struck weakened, malnourished troops on the Western Front during the war's final days in late 1918. It was later dubbed the Spanish flu –not because it originated there, but because that was the first country to report it.

According to Australia's official records 12,000 people died of the respiratory condition in the 1919 outbreak. Later revised estimates, considered quite conservative, suggested more than 17,000 people died of it in Australia at the time. Up to 40 per cent of the population fell ill.

While air travel and technology have helped the coronavirus spread around the world within weeks, Australia had many months to prepare its defences after it first received word in 1918 that pneumonic influenza was on its way. 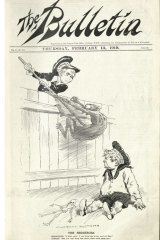 The Spanish flu border stoush between Victoria and NSW was captured in an illustration by Norman Lindsay on the cover of the February 13, 1919 edition of The Bulletin.

Officials got wind of the outbreak from South Africa, and put in place strict maritime quarantine controls for any ships that docked at our ports.

That held the condition at bay for some time. But the virus broke through our maritime defences and caused an almighty bunfight between Victoria and NSW when it leapt over state lines.

Victoria was slow to declare an outbreak, such was its overconfidence in its quarantine measures. NSW ended up declaring cases first, followed a day later by Victoria.

A day after that, NSW closed its borders to Victoria – in defiance of a national agreement hammered out in late 1918 in preparation for the pandemic – leaving many people stranded on the opposite side to where they lived.

Once it hit, authorities mobilised, setting up 35 temporary hospitals around Victoria, many in schools that remained closed after the summer holidays. The Melbourne Exhibition Buildings became our biggest pop-up medical centre, treating around 1500 patients at a time.

The condition spread most rapidly in central Melbourne, as well as in Port Melbourne, near the docks, and in the slums of Collingwood and Fitzroy. Other hotspots appeared in Warrnambool, possibly due to its port, and in Wonthaggi, largely among coal miners whose lungs were already weakened. 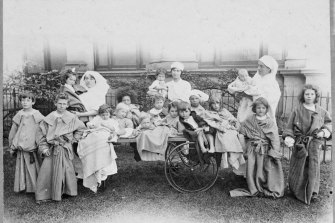 Nurses and patients outside the Royal Exhibition Building during the pandemic. The makeshift hospital catered to up to 1500 patients at a time.Credit:Museums Victoria

Employers staggered workers' hours to reduce contact on public transport. Schools stayed shut after summer holidays. But the virus spread into the suburbs, following the path of railway lines, then further afield, carried by postmen.

Mary Sheehan, a professional historian who has spent several years researching the Spanish flu in Victoria for her doctorate, said it was sad that there were few reminders left of the pandemic.

"There were more deaths from that than the war," she said. "But I guess the war was a bit more tangible.

"If there’s a fire, a flood, there’s something you can fight." Ms Sheehan said. "There’s no heroics with this."

In 1919, they didn't even know what a virus was – they thought the condition was a bacterial infection.

"There was no knowledge of viruses at the time, and coming straight out of the war, it must have been terrifying. People were blaming Russia," Ms Sheehan said, after its flu outbreak in the 1890s, "or the wrath of God.

"There was a mandatory requirement to report cases, and the fine was pretty hefty, I think it was about 20 pounds if you didn’t report a case, and the household was confined too.

"People would deliver meals or milk to the front gate. But there were those who went to work because they simply had to."

There was little or no government assistance at the time. 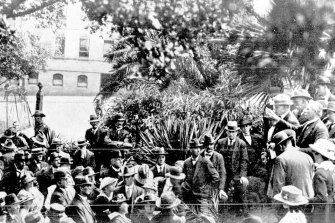 Around 200 people from interstate who were left stranded in Victoria after state border were closed gathered at Melbourne’s Treasury Gardens on February 4, 1919.Credit:The Australasian/National Library of Australia

"It made destitution more commonplace." Ms Sheehan said. "There were quite moving cases of people, particularly in the inner city area, who were totally destitute."

But there were also many examples of generosity.

"There was a lot more community support, and that was amazing. I was just reading recently, in Wonthaggi they was organised a rabbit shooting party, and businesses donated the cartridges.

"In Yarraville there were women going around doing people’s washing, cleaning their houses for them, making custard for people and other sorts of food to hand out, barley water and gruel…

"It's much better than supermarket hoarding."

As the number of cases started to ebb, so did people's vigilance. Authorities began to close the temporary hospitals.

Just as everybody let their guard down, the next wave hit Victoria, much harder than the first, claiming far more lives. A third, less severe wave was still to come.

"The big mistake they made, the education department and the health department … they thought it was all over so they closed 16 emergency hospitals, they relaxed," Ms Sheehan said.

"The increases at the Exhibition hospital were quite incredible really, they just had more people than they could deal with. They couldn’t get them hospitalised and they were neglected…

"The estimates in Victoria were there were about 3500 deaths, and in metropolitan Melbourne about 2500. But I think they are I think grossly underestimated.

"There were plenty of others who died and it went unnoticed."

There was still was much to be learned from the actions taken a century ago, particularly in terms of containment, Ms Sheehan said.

"It's quite fascinating," she said. "The measures implemented now are really important in terms of social distancing and self-isolation.

"During the pandemic in Melbourne they staggered working hours to lessen crowding on public transport. Some areas in the public service would start early and knock off early. It just spread the numbers travelling. In a way they’re doing that now.

"Football wasn’t [cancelled]. I checked that. I thought it would be but it wasn’t. But the races were called off. Maybe football was less crowded.

"Bands were still allowed to play as long as they kept their distance from each other. Weddings were limited to the bride and groom and witnesses. I think funerals were limited as well."

"When you study it, you … look at the bigger picture and realise people were going about their daily lives, but implementing protective measures.

"This will be forgotten too, the coronavirus. There’s nothing tangible, there’s not going to be any monuments, no destruction of any form, nothing left in the landscape.

"But there's plenty to learn from it."