Until last week, it had been a hot minute since British musician Ed Sheeran released new music. But don’t worry fans, he is back and ready to drop lots of material it appears. According to The Sun, the “Thinking Out Loud” chart-topper stated he wrote “25 songs a week” while he was on a mini-hiatus. “I have done two albums and have written like 250 songs. In that, about 50 ballads,” he told the publication, adding, “I write about 25 songs a week and one of them will be all right and that will go on the ‘maybe’ list.”

While creating his new material, it seems Sheeran was also working alongside music icon Elton John. “Ed and Elton put their heads together and got some new tracks written together. They’re really good pals and it was great they could connect and work on new music together,” an insider told The Sun. “The songs they wrote are great and they have a very special place in Ed’s heart.”

Sheeran dropped his single “Habits” on June 25, which will be taken from his upcoming fifth studio album. The LP is believed to be called “Subtract.” While promoting the track, the Grammy Award winner has revealed that a legendary Australian pop singer is expected to feature on one of the album tracks. Keep reading to find out more. 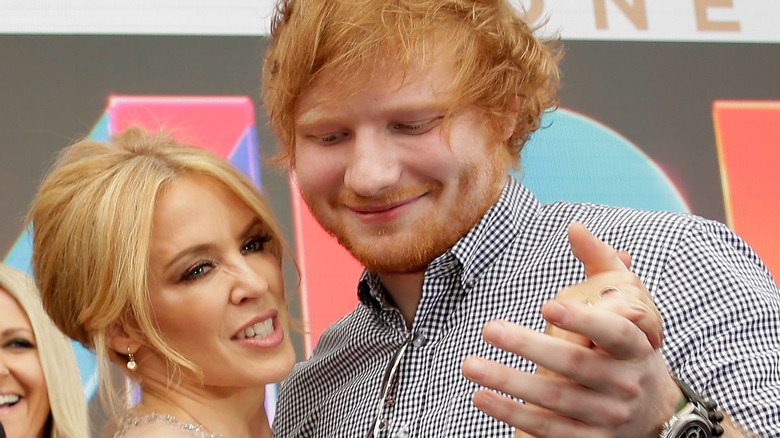 During an interview with “Ash London LIVE,” Ed Sheeran explained he has worked with two Australian stars — Kylie Minogue and Jimmy Barnes — on a track.

According to Music News, Sheeran flew out to Australia in March this year to perform with Minogue at a memorial for his friend who died, music executive Michael Gudinski. He joined Minogue on stage for renditions of her hits “All The Lovers” and “The Locomotion” and sang their new song together, “Visiting Hours.” The unreleased song also features vocals from Barnes and is expected to be on Sheeran’s upcoming LP.

“Jimmy Barnes and Kylie are actually singing on that on the album now. I’ve got them singing backing vocals on it,” Sheeran said. “From knowing Michael, they are the most important people in his life musically. He was always saying, ‘Kylie’ or ‘Jimmy Barnes’.” He also explained how the track came together. “When I was in Australia, I sang with Kylie and I was hanging with Jimmy Barnes and I said to them, ‘You guys have to be on the song,” he continued, adding, “So I got back to England, I recorded it and sent it off to them and they’re on it.”