Games On? Or Games Over?

It would be one of the biggest sports news stories ever.

The postponement – or cancellation – of the world’s greatest sporting mega-event because of coronavirus would be unprecedented in peacetime.

The 2020 Olympics are due to take place in Tokyo from 24 July to 9 August – here are some of the key questions as the Olympic movement faces up to unchartered territory.

What is the latest in Japan?

There is inevitably mounting concern; Japan’s proximity to China where the outbreak began, the postponement of Tokyo 2020 volunteer training, the restrictions placed on last weekend’s Tokyo marathon where only elite runners were allowed to participate, the suspension of J-League matches and other sports events, and the country’s closure of schools.

The Asia Sevens rugby tournament, which was due to be a pre-Games test event held in Tokyo next month, was cancelled on Wednesday.

The news came just as International Olympic Committee (IOC) president Thomas Bach was facing the media in Lausanne, after a two-day executive board meeting.

Tokyo 2020 organisers had also agreed to scale back the torch relay in response to coronavirus, with the lighting of the flame due to take place in Greece next week.

Japan’s Olympics minister broke ranks on Tuesday, saying that Tokyo’s contract with the IOC allowed for the Games to be postponed until later this year.

What has the IOC said? 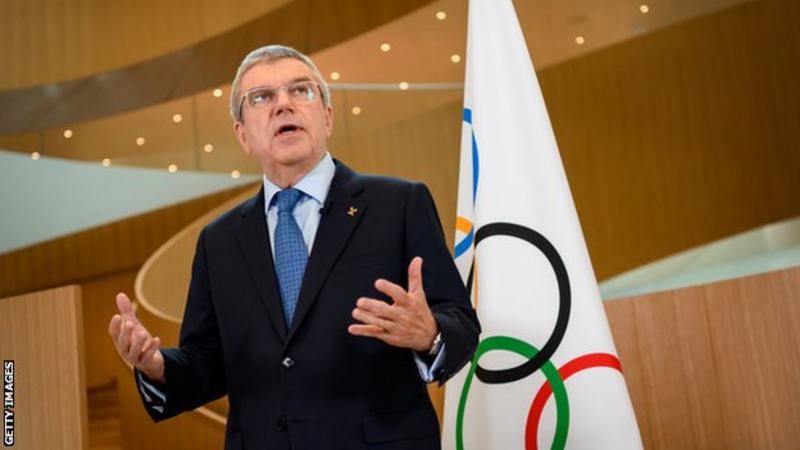 At the news conference on the banks of Lake Geneva, Bach fended off a barrage of questions about whether the Olympics could be delayed.

The admission 24 hours earlier from Japan’s Olympics minister perhaps forced Bach into a hastily arranged and unscheduled statement, in which he tried to make clear his confidence the event would proceed as planned, and urged athletes to prepare “full steam”.

At his news conference the following day, Bach struck an even more defiant tone.

He denied having a ‘Plan B’, refused to be drawn on when any decision to postpone or cancel could be made and remarkably insisted – not entirely convincingly – that the words “cancellation” and “postponement” were not even mentioned during the meeting.

The president did admit to a “challenge” when it came to the cancelling of some qualifying events, as has the International Paralympic Committee (IPC), which has also said qualification criteria will be reviewed as a result.

In a letter to athletes on Thursday, Bach seemed to reveal a little more realism, admitting the coronavirus was “a major concern for all of us” and was “a major subject of discussion” at the executive board meeting.

When asked what exactly his confidence was based on, Bach referred to the guidance the IOC is receiving from the World Health Organisation, part of a dedicated task-force that is now in regular dialogue, without explaining what that advice actually was.

Bach’s reassuring messaging will no doubt be welcomed by many in Japan, the Olympic movement, its stakeholders, and many athletes.

But some may wonder whether the president is in denial. Or merely delaying the inevitable. Others will ask if it is irresponsible or naive not to have a contingency plan.

The reality is the IOC almost certainly does have a ‘Plan B’. Insiders explain that it always does for unforeseen events at the Olympics, ranging from terrorism and war to natural disasters and boycotts.

As Bach – a man who never gives the impression of panicking – explained in Lausanne, he has been faced with challenges ahead of previous Games before – from the Zika virus and Russia’s state-sponsored doping scandal before Rio 2016, to the threat of nuclear war on the Korean peninsular in the build-up to Pyeongchang 2018.

So perhaps his calm exterior should not come as too great a surprise. The IOC operates in something of a bubble after all, and will not be pushed into an expression of alarm just because some in the outside world expects it.

Perhaps this is wise. This crisis comes with the IOC facing a challenge to persuade cities to bid to host Games at the best of times. Bach is hardly going to rush into cancelling or delaying Tokyo 2020 – and perhaps in doing so deter other cities from bidding in the future – until it becomes absolutely necessary.

Why no decision yet? 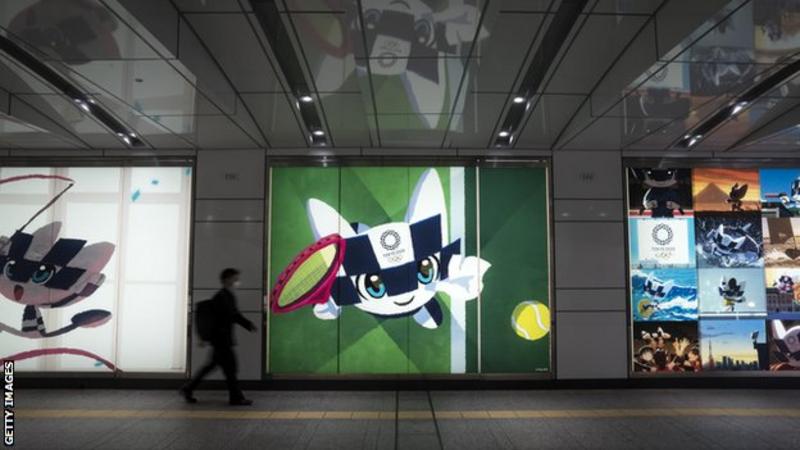 Firstly, because it may be premature. If the Games were being held now, it is hard to see how it could proceed as planned given the current approach of the Japanese authorities to mass gatherings and thousands of athletes in close proximity to each other in the village. But if, as many hope, the outbreak peaks, and then eases in the summer months, then it would be Games on.

And secondly, if the IOC were to publicly countenance a delay or cancellation, it would almost certainly have a detrimental effect, harming sales of tickets and hospitality packages, worrying athletes, and harming the all-important broadcast and sponsorship partners who ultimately bankroll the Olympic movement.

The only exception to this stance so far has come from long-serving IOC member Dick Pound, who last week admitted a decision to cancel could be made as late as May.

Ultimately, the situation is fluid and developing all the time, and just because Bach is confident now, it does not mean the situation will not change. So his words should be viewed with that in mind.

Under the heading ‘Termination’, clause 66 of the official Tokyo 2020 host city contract gives the IOC the authority to “withdraw the Games from the city” in the event of war (as happened in 1916, 1940 and 1944), civil disorder or boycott, or if the organisation believes that the safety of participants would be threatened “for any reason whatsoever”.

Significantly perhaps, the document states the IOC can also terminate if the Games do not take place in 2020. There is no reference to postponement.

The IOC then, is in control. But ultimately it will act on the advice of the experts at the World Health Organisation – and the Japanese government.

And with so much at stake, until they tell the IOC that to proceed would be irresponsible, expect the show of confidence to be maintained for as long as possible.

Could there be a short delay?

The distinct sense I picked up in Lausanne this week was that the kind of short-term three to four-month delay mooted by Japan’s Olympic Minister is highly unlikely. In fact, almost impossible.

It would certainly be very difficult trying to fit an autumn or winter Games into an already crowded sporting calendar, with so many other international events planned years in advance and potentially impacted.

Under a deal agreed four years ago, more than 5,000 apartments in the athletes’ village are due to be sold to private residents after the Paralympics, so it is unclear whether it would even be possible to accommodate 11,000 competitors and thousands more support staff at a later date in the event of a postponement. The availability of hotel rooms and volunteers would be uncertain.

The IOC’s most important live broadcast partner NBC – which has just announced it has sold a record £970m of advertising for Tokyo 2020 – may also take a dim view of the prospect of the Games clashing with the professional US basketball and NFL seasons, with the obvious negative knock-on effect that would have on audiences.

What are the other options?

Stage the Games without fans and behind closed doors, as suggested this week by British Cycling performance director Stephen Park.

Delay it by a whole year.

Try to re-locate the event elsewhere.

Or cancel it altogether, which as Pound suggested last week, actually feels like the most likely outcome in the event the outbreak prevents the Games taking place as planned.

That may seem unthinkable. The impact would be hard to quantify, But interestingly, it may not be as cataclysmic to the IOC as you may imagine.

The host city contract states that in the event of a cancellation, the local organising committee “waive any claim and right to any form of indemnity, damages or other compensation or remedy of any kind”. So Tokyo could not sue the IOC for damages.

The IOC has built up reserves of about £700m in case a Games is lost, and which would enable it to still support international sports federations and national Olympic committees.

The IOC is thought to have spent about £20m on insurance to cover most of the £800m investment it pumps into each summer Olympics.

On the assumption that its policy covers diseases like coronavirus, the IOC could claim for lost income.

Who would be the biggest losers in the event of cancellation?

The insurance industry, which would suddenly face hundreds of millions of pounds’ worth of claims from broadcasters, advertisers, sponsors, hotels, and of course the local organisers themselves, all trying to claw back some of the losses they would incur.

Japan, which may have insurance for lost ticket sales, but would be unable to reclaim the estimated £10bn it has spent on infrastructure and preparation for the Games over the past seven years as it tries to use the event as a means of kickstarting a recovery from the 2011 Tohoku disaster. And it is too late to scale back now. The investment has been made. The loss in tourism revenue would also be a major blow to the country’s struggling economy.

And finally the athletes, men and women who have spent years dreaming of and training for the Games. For many, Tokyo will be their only chance of experiencing the Olympics.

When one considers just how much is at stake, perhaps it is no surprise that Bach seems so reluctant to even contemplate the suggestion of a delay or cancellation, and is in no rush to take a decision before he needs to.