It could be a glimpse of two harpists (one playing a classical harp, the other an African kora) on a stage nestled beneath tall trees.

It could be the startling sight of giant faces projected onto foliage and blinking benignly as they peer into the night. 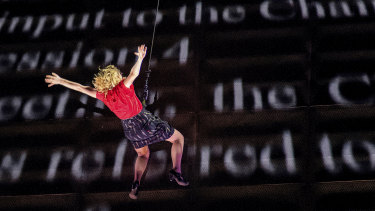 It could be a four-metre-high monkey or antelope – guided by the expert puppeteers of France's Company Archibald Caramantran – sashaying gracefully through the crowd or bending down to gently embrace a small child.

It could even be a naked circus performer, temporarily stripped of his shorts (and his modesty) by fellow members of the remarkable Australian troupe Gravity and Other Myths.

A record number of revellers made their way to Botanic Park on the weekend for this year's WOMADelaide, with over 97,000 tickets sold across the four-day event.

But it was still possible – indeed, virtually guaranteed – that dedicated patrons could stumble upon something enchantingly unexpected.

Neither coronavirus fears nor the late withdrawal of one of the festival's headline artists (Ziggy Marley) dampened patrons' enthusiasm for the annual event, which has managed to maintain its air of relaxed charm despite tripling its audience figures since the debut edition in 1992.

Admittedly, it's a little trickier these days to stroll from stage to stage and find a prime viewing spot without careful navigation (or some polite elbow nudging). 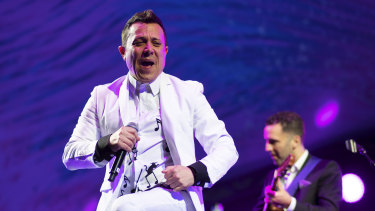 Musically, the seven stages hosted acts ranging from intimate solo artists to big-band extravaganzas. There was heart-stirring gospel from the Blind Boys of Alabama; spirited Celtic reels courtesy of Scotland's Rura; hypnotic, pulsating Afrobeat from the Public Opinion Afro Orchestra; and madcap Balkan brass played by Belgians who looked like bikies (but with a rare talent for odd-metered folk dancing).

Some of the most engaging shows combined vastly different musical sources to create unlikely new hybrids. Rhiannon Giddens and Francesco Turrisi forged an alluring blend of 19th American minstrel music and sprightly southern Italian rhythms. Giddens's voice is as potent as her convictions, carrying echoes of history and heartache as she embodied aching spirituals or earthy blues, her fiddle and banjo responding to the irresistible pulse of Turrisi's frame drums and accordion.

UK company Wired Aerial Theatre was also concerned with extinction, but of species and ecosystems rather than musical traditions. Their spectacular production As the World Tipped began on a horizontal stage that gradually tilted to become a vertical screen suspended high in the sky.

Actors suddenly became aerialists, scrambling and tumbling across projected images of floods, fires and mass urbanisation in an enthralling visual representation of the impact of climate change. Thought-provoking and technically ingenious, it took us on an immersive journey that was by turns playful, sobering and inspiring. 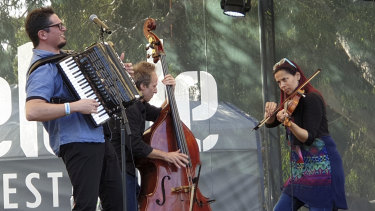 It's always the cumulative impact of multiple sensory experiences that makes WOMADelaide so memorable. But if I had to choose highlights I'd nominate two acts from opposite ends of the dynamic spectrum. Portuguese singer-guitarist Luisa Sobral presented two spellbinding shows on the tiny Moreton Bay stage, her voice floating effortlessly over tender lullabies and jazz-inflected jaunts, accompanied by the warm swell of a three-piece horn section.

And Cuba's Orquesta Akokan – led by the intensely charismatic vocalist Jose "Pepito" Gomez – transported us to a glittering nightclub in 1930s Havana. Offstage the dancers might have been barefoot and singlet-clad, but onstage it was all elegant suits, crisp horns, exuberant solos and rhythms so utterly contagious that even the weariest patrons were pulled to their feet to be part of the celebration.