VINCE MCMAHON made his first match appearance in eight-years with a hilarious cameo during the odd Money in the Bank pay-per-view tonight.

The 74-year-old WWE owner has not been involved directly in a bout since facing off against CM Punk during the main event of Monday Night RAW in 2012. 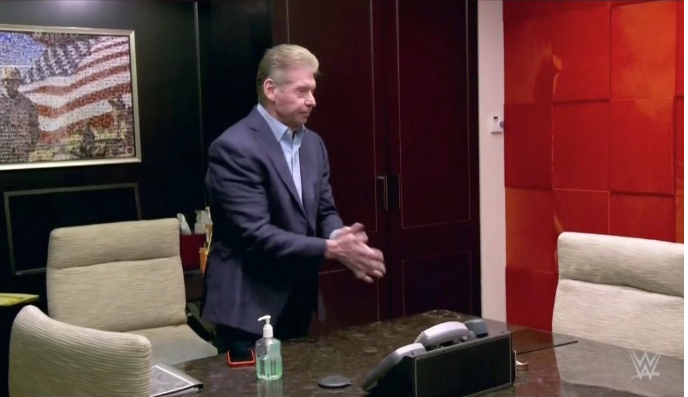 He has had a smattering of showings, mostly on anniversaries and special occasions as he takes a step back from the limelight at his tender age.

But the wrestling legend got involved when his promotion needed him most last night, as he was seen in the highlight Money in the Bank bout.

As AJ Styles and Daniel Bryan fought around WWE HQ – where the match was being held due to Covid-19 – they burst into the boss' office.

He was less than impressed with their display, fuming and telling the duo to get out, as the sheepish power cowered respectfully.

The pair quickly helped tidy the table and chairs they had displaced while trading punches and backed out before McMahon could shout again.

And as they left, the owner could be seen putting hand sanitiser on, in a clear nod to the coronavirus outbreak which is blighting the world at present.

Social media was quick to pick up on that, and loved seeing McMahon on the TV again after an extended period out.

One fan said: "AJ and Bryan calmly talking after they left the office, then attacking each other again had me rolling."

Another added: "THIS HAD ME ROLLING! It's not the old school wrestling everyone used to know.

"It's modern age entertainment and I was truly entertained in this match!"

It was another night of twist and turns at Money in the Bank, with an action-packed night of fascinating bouts.

Asuka won the women's main event, and will come face-to-face with Becky Lynch on Raw on Monday Night.

And in a huge shock, Otis grabbed the men's briefcase, after Styles dropped it out of his hands from the top of the ladder on the roof.