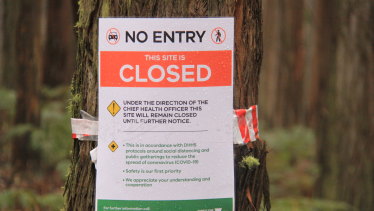 "Almost all the volunteer weeding programs around the country [run by councils and community groups] have been halted," Mr Cox said.

"Weeding is critical now, particularly in eastern Australia after the bushfires, particularly since we also got a lot of rainfall in recent weeks and the weeds are going gangbusters. Weeds thrive in disruption [from fires] and bad land management and they're getting a free hand during this period."

Native forestry and other industry is permitted within NSW and Victorian government social distancing, public gathering and travel restrictions. But many non-commercial activities such as travelling to document the environment ahead of forestry activity or observing the logging process are not.

Victorian National Parks Association executive director Matt Ruchel said community groups and volunteers picked up "government slack and held loggers to account", and logging should proceed only in areas they had already surveyed for wildlife.

"Current government forest protection surveys are limited in scope and range and either have to be ramped up to cover all potential logging areas across the state or logging should be stopped or at a minimum restricted to those with robust comprehensive surveys," Mr Ruchel said.

Chris Schuringa, spokeswoman for East Gippsland conservation group Goongerah Environment Centre said it was "unreasonable" that logging in native forests was allowed to continue while "critical surveying done by volunteers" was potentially illegal.

North East Forest Alliance member Susie Russel said there was "a lot of angst" among her peers over the government restrictions.

"We don't trust government agencies and the Forest Corporation to do proper monitoring of habitat but we felt the way the media could spin it if police were called out to a protest could be very counter-productive," Ms Russell said.

Community groups fill gaps in public expenditure on the environment. Thirteen leading ecologists published a paper in October in the journal Conservation Letters that found spending on Australia's threatened species dropped to $49.6 million in 2018-19, from $86.9 million in 2017-18. They forecast a rise to $54.6 million this fiscal year.

Federal Environment Minister Sussan Ley said in January she "didn't accept the money has been wound back" and while some programs were scaled back others, such as regional land management, had increased.