Tammy Slaton has tried different methods of losing weight on 1000-lb Sisters. However, she hasn’t really found anything that works for her or a rehab that she can stick with. This week, Tammy tried going to therapy. She wasn’t as receptive to the method as the therapist had hoped but TLC fans are rooting for Tammy to give therapy a solid try.

Tammy’s stint in therapy didn’t go as well as anyone would have hoped. After having trouble getting into the office, Tammy was already in a bad mood when she arrived.

“What I am telling you is I got to catch my breath before I can stand back up,” Tammy said frustrated as her wheelchair blocked the door. The therapist, Dr. Hansen, then had someone come and move the couch so that Tammy’s wheelchair could go further into the office. At that point, Tammy said she was already ready to go home.

When the session started, Dr. Hansen tried to get to know Tammy but was met with short, uninformative answers. She asked Tammy if she used food to cope with things in life. Tammy didn’t answer. Dr. Hansen continued pushing, saying that her goal was to get Tammy to talk about the reasons that she overeats. Tammy refused to share any of her reasons. 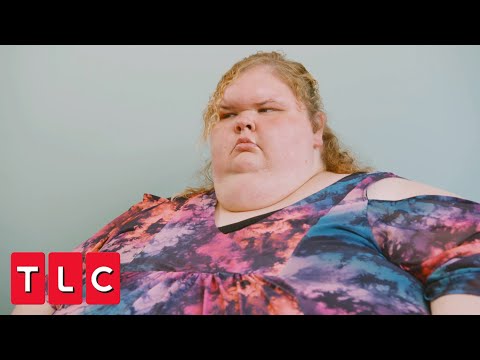 Though Tammy didn’t tell Dr. Hansen much, fans really want her to stick with the process.

“Addiction is all about using those as a coping mechanism,” one fan wrote on Reddit. “If Tammy gave therapy a chance, she would have another coping mechanism other than food addiction. I know she wouldn’t do this but I feel this would be a better start for her than dieting.”

“It always seems that the people who refuse therapy the most could use it the most,” another person wrote.

“I agree, if she got to a point where she was actually willing to participate in the process I think it could help her a ton,” one fan said. “I couldn’t believe how rude she was to the therapist, though.”

Some people wondered if Tammy was too far gone for therapy to help.

“Facing and dealing with her emotions and problems is hard though,” one person pointed out. “She doesn’t like to do anything hard. It’s easier to eat away her feelings, it’s easier to sit in a chair and let others push her around. It’s easier to sit in a chair and let someone else make her meals, do her grocery shopping, wipe her butt, etc. Why should she stop doing what she’s doing when everyone around her is making it easy for her to keep doing it? She doesn’t want to do anything even a little hard let alone really hard like deal with her emotional issues.”

And some people thought all of the family members, including Amy Slaton, needed to try therapy.

“They all should give therapy a chance,” a fan wrote.

“Amy really needs it to address her current issue with her excess skin, the reason why she wanted to get it removed was due to feeling insecure,” one person said. “Which I can understand. A lot of people who have lost weight have the insecurity of the excess skin.”