In the heyday of Tom Selleck’s original claim to fame, Magnum PI, Selleck was very much the sex symbol, even if his show didn’t trade that heavily in romance. Now fans are starting to wonder if his current claim to fame, Blue Bloods, should give his character some love — namely a love life.

The idea has been bandied about before, but that’s the suggestion fans made recently on Twitter when the show’s official account asked “If you could give Frank Regan a piece of advice, what would it be?” 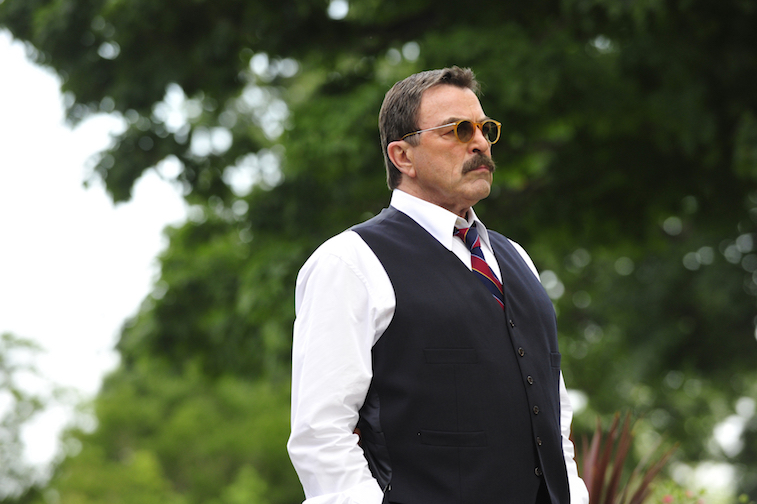 The very first response on the Blue Bloods twitter thread said, “Find a woman, Frank. It’s time. You deserve love.” Another said, “Get a good woman in his life! He’s too wonderful a man to be alone” And a third person said, “Go on a date Frank! Fall in love.”

Since the thread ran shortly before Valentine’s Day, romance must have been on viewers’ minds, but this isn’t the first time the question has come up. No doubt inspired by their fondness for Magnum, fans want to see a character played by Selleck have a romantic life again. It would stoke more than a few fantasies.

But it would definitely fill a hole in Frank’s life. Viewers never saw Frank’s wife; he was a widower when the show started. According to his character biography, she had been married to Mary Reagan since the early 1970s, but she died of cancer in 2005. She is only seen in photographs or mentioned during the show’s famed family dinner scenes.

Other ‘Blue Bloods’ characters have struggled romantically too

The lack of love, or at least trouble with love, has been a recurring theme among Frank’s children as well. Erin Reagan has had stormy relationships, and Jamie Reagan had problems too, at least early in the show’s run.

A 2015 post on Quora noted their romantic difficulties, posing the question, “Why can’t Frank and Jamie Reagan find a regular girlfriend and Erin find a regular boyfriend in Blue Bloods?”

One person answered, “Cops date, marry, have families, get divorced, get blind drunk, do drugs – and risk their lives to save other people’s lives.  Almost like real people … But this is a story. If it required Frank to have a romantic interest, one would somehow pop up. Maybe he and Baker would start having “lunch” together.  Or some old flame would move back to New York.’

The show did address Jamie’s love life, by having him marry his partner, Eddie, and while being married to your police partner has its own issues, so far the most upset Eddie has caused the family recently is trying, not very successfully, to turn them on to plant-based burgers.

What does Tom Selleck have to say about Frank’s love life?

So where does this leave Frank? Condemned to widower-hood for as long as Blue Bloods runs? Tom Selleck seems to think so. TV Insider asked about a romance between his and Bebe Neuwirth’s characters, but Selleck didn’t think that would go beyond a flirtation.

“I love working with Bebe, but I don’t see their characters getting married. People are always saying Frank must be lonely, so when are we going to do a romantic story? It’s important he remains a man alone in overall concept because that’s part of the sacrifice he’s made. And how do you meet, fall in love and then have the relationship end in one episode?”

For now, at least, Frank seems to have found solace in Jamie’s marriage to Eddie, but if people want to see Tom Selleck get romantic, they’ll have to turn to Friends and his relationship with Courteney Cox.