From myriad zombie apocalypse films to a collection of more realistic thrillers and dramas about outbreaks, like Flu and Outbreak, pandemic movies seem to be going absolutely viral when it comes to popular streaming services like Netflix and Hulu. If you’re looking for the right apocalyptic horror movie or medical thriller to check out, you’ve come to the right place.

Keep reading to check out the most viral and popular pandemic movies available for streaming. 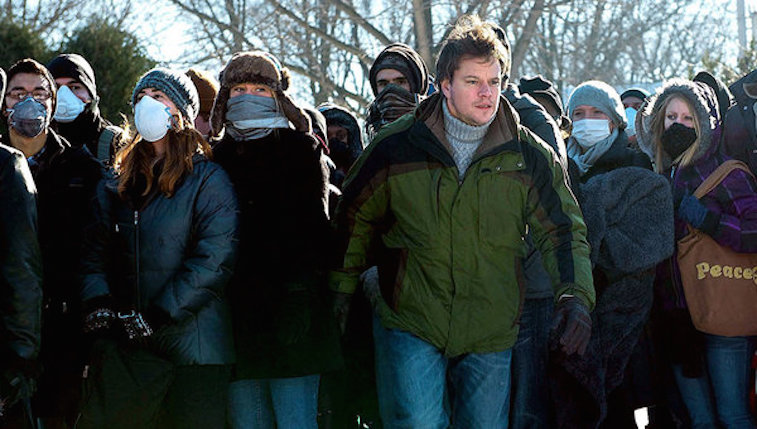 After its theatrical release in 2011, Steven Soderbergh’s Contagion has once again gone viral. The film became especially popular on streaming services, like iTunes and Amazon Prime, since the COVID-19 outbreak began.

The film follows the onset and aftermath of a fast-spreading, lethal virus that makes its way from Hong Kong to the United States when an infected traveling business woman, played by Gwyneth Paltrow, returns home. Her return is the catalyst of the outbreak, which goes on to completely cripple the country, infecting millions. As the Centers for Disease Control and Prevention races to find a cure, fear and mass hysteria begins to spread globally.

The film features an all star ensemble cast, starring Laurence Fishburne, Kate Winslet, and Jennifer Ehle as scientists working diligently to save humanity from a deadly pandemic, while Jude Law plays a conspiracy theorist and blogger working to turn people against the government.

Contagion is available to stream on Hulu. The film is also available to rent on Amazon Prime and iTunes, where it is currently among the platform’s Top Trending Movies.

Based on the 1954 novel of the same name by Richard Matheson, I Am Legend is the third feature-film adaptation of the novel and received mostly critical praise from viewers.

The story takes place in New York City where scientists have created a virus intended to cure cancer. Instead of providing a cure, the virus completely wipes out mankind, except for a few survivors who were turned into vicious nocturnal mutants. Will Smith plays a US Army virologist named Robert Neville who became the last man on Earth because of his immunity to the virus. In a world without people, Neville fights to stay sane while trying to make a cure for the virus with his blood. Meanwhile, Neville and his dog Sam are forced to defend themselves against an army of mutants out for blood.

I Am Legend is available for streaming on fuboTV and available to rent on Amazon Prime.

Based on the 2006 novel of the same name by Max Brooks, World War Z revolves around a former United Nations investigator named Gerry Lane, played by Brad Pitt, who is living an idyllic life with his wife and daughters when they are suddenly thrown into serious peril during a seemingly normal traffic jam. All of a sudden, a pandemic has struck the nation, turning normal, healthy people into feral, violent creatures with one bite from an infected person.

As the virus threatens to destroy humanity at a global scale, it’s up to Gerry and a group of surviving scientists and government officials to discover the source of the pandemic and stop its spread before humanity is literally consumed by a zombie apocalypse.

What happens when a military plane crashes and poisons a small town’s water supply with its cargo? Breck Eisner’s 2010 science fiction horror film, a remake of George Romero’s 1973 film, The Crazies has the answer… and it isn’t pretty.

Timothy Olyphant plays David, the sheriff of a small town in Iowa. After a toxin within the town’s water supply begins to turn the town’s citizens into violent, remorseless killers, the surviving citizens are forced into quarantine by the military. Authorities have trapped people in the city without any means of communicating with the outside world. In a desperate attempt for survival, David and his pregnant wife, Judy, played by Radha Mitchell, band together with the remaining survivors of the town to survive and find a way past the military to escape, or die trying.

As one of the most iconic pandemic movies in Hollywood, Outbreak recently celebrated its 25th anniversary of frightening people away from both primates and pandemics.

Directed by Wolfgang Peterson and based on Richard Preston’s book The Hot Zone, Outbreak revolves around the outbreak of a fictional virus and its spread from Africa to a small California town. The outbreak begins when a white-headed capuchin monkey that is a host to the virus is smuggled into the country to be sold on the black market. Instead, the monkey infects everyone she comes into contact with and is eventually released into the woods where she can spread the illness further. As the outbreak spreads in the town, an Army virologist, played by Dustin Hoffman, is brought in to help establish some control of the spread of the disease in order to prevent a total pandemic. In the meantime, the military takes drastic measures to contain the spread of the virus, including quarantining the town.

Outbreak is a terrifying exploration of just how far authority figures could be willing to go to prevent a global pandemic. The film is available for streaming on Netflix and available for rent on Amazon Prime.

Read more: Under Quarantine: 4 of the Most Realistic Movies About Pandemics