There aren’t a Laura laughs coming up in Coronation Street in the wake of the discovery of Rick Neelan’s body.

Gary Windass (Mikey North) has admitted to Rick’s wife Laura (Kel Allen) that he was the one who killed him.

Surprisingly, usually troublesome Laura didn’t even do so much as blackmail him.

She understood the dark world Rick was in and, knowing her daughter Kelly (Millie Gibson) is finally settled with Gary and Maria (Samia Longchambon), she has decided to make a huge sacrifice.

Laura is terminally ill and, as the video clip above shows, she is seen confessing to the police that she killed Rick.

But why is admitting to murder so hard – you’d think the police would want a case closed.

The detective isn’t having it though, doubting Laura’s version of events and sniffing a cover up. 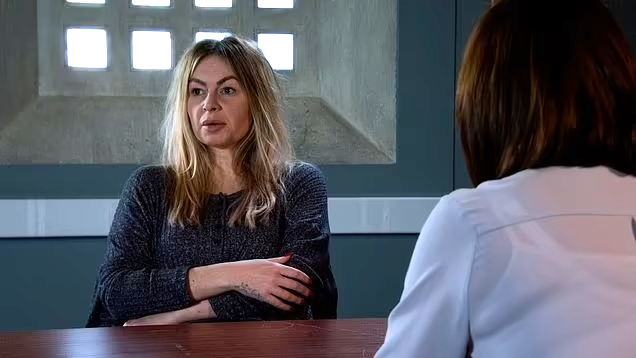 To be fair, she isn’t wrong but Laura is determined for Kelly to have a stable life after she has gone.

Kelly has been estranged from two unsuitable parents, was jailed for a murder she didn’t commit and ended up homeless and on drugs.

What she needs now is consistency and love, something with Gary, despite his faults, can supply with Maria.

So the job on Laura’s hands is to convince police that she is a murderer before she dies.

Will she manage to to, um, frame herself and save Gary’s skin?